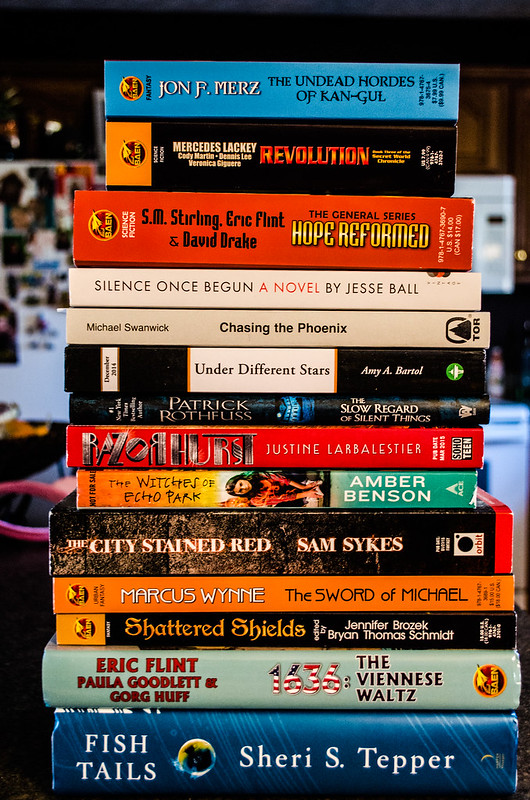 A very fine collection of books and ARCs to show off this week. Let me know which ones you wish you had in your hands, down there in the comments.

Pretty cool looking, I have to say. It’s a wrap-around; the front cover is on the right side of the image. A larger version is here.

And here’s what I think of politics here in 2014: Nnnnnnnnggggggggghhh. Or, to put in perhaps more contemporary terms, 2014: The Year I Literally Just Could Not Even.

Which is not to say that I’m not voting. I am voting. What I mean to say is that this year I don’t really feel anything other than complete fatigue at the whole political process. Broadly speaking, the Republicans are frothing ideologues, the Democrats are incompetent, and it appears that in general the relevant voting public will prefer frothing to incompetent, since FiveThirtyEight thinks there’s a better than 60% chance the Senate majority will go to the GOP in the election — although not by a lot, so, yay, I guess?

What that will mean in real-world terms is a lot of parliamentary blockage and/or presidential vetoes of Republican legislative initiatives for the next two years, which I’m fine with (see my opinion of the general state of the GOP above), but which means another two years of high-level stupid on the federal level. But inasmuch as we will get that even if the Democrats do, in fact, barely manage to keep the Senate: Meh. And, yes, I know it’s rather more complicated than that, but I’m telling you how I feel about it all. This is how I feel.

(Mind you, if the GOP takes the Senate, I think there’s a reasonable chance of the GOP in the House finally voting to impeach Obama for the heinous crime of being Obama, although I’m sure they’ll find something else to pretend it will be about. And then Obama will be acquitted in the Senate trial and we’ll establish the hard fact that the modern GOP, when given the opportunity, will try to oust sitting Democratic presidents via the impeachment process just because. Also, I think Obama would love for the GOP to impeach him. There is pretty much no downside for him if a bunch of a white male GOPers impeach a sitting black president on what will amount to complete bullshit charges. Dear House GOP: Don’t be giving Obama one more rope-a-dope.)

I should note that the federal elections are largely outside of my purview this time around. The only federal-level election I need to vote on is for my House representative, who is now and will continue to be John Boehner, who in his entire OH-8 electoral history has never gotten less than 61% of the vote, and isn’t about to blow that streak this year. I’m not voting for Boehner, but doesn’t mean he won’t win. I am as always comfortably resigned to the fact. There are no Senate races in Ohio this year.

On the state level, it’s almost certain sitting Ohio Governor John Kasich is going to win in a walk, not because the people of Ohio love him (general feeling: meh), but because his opponent Edward FitzGerald is better known for parking with a woman who was not his wife than for any of his policy points. I’m not voting for Kasich, but as I don’t like to reward abject incompetence, I don’t think I’m voting for FitzGerald either. I might vote for the Green Party candidate, just to see what it feels like. To be honest, the only state office race I’m really worked up for is Secretary of State, because incumbent John Husted is a tool who went out of his way to make it harder to vote in Ohio. Fuck you, Husted. I’m voting for your Democratic opponent, Nina Turner (although, again, Husted sits on a comfortable margin and will likely win).

Indeed, because of where I live in Ohio, and because of the general trends in the state and in the national races, it looks like a good(ish) year for GOP in general. I’m not a fan of the current iteration of the GOP, which is putting it mildly, so this does not please me intellectually. But speaking as a straight white man of comfortable income, the GOP isn’t going to do me any harm, personally. It’s everyone else who might eventually feel the pinch. This is where I remind all y’all that folks like me already get a ton of advantages; you don’t have to keep giving us more through the political process.

And I think this is why I find it very difficult to get worked up about this particular election one way or another. It’s basically a status quo election. Things might change, but not by much, and at the end of the day the essential problems of our political classes will not be fixed to any degree. This isn’t an epochal election, it’s just killing time until 2016.

Now, I could be wrong: I’m the first to say that my personal political crystal ball has been notably cloudy in the past. But this election doesn’t feel like there’s much there there. I’ll be voting. But this the least enthusiastic I’ve felt about it since I’ve been able to vote. Maybe that means something. We’ll see.