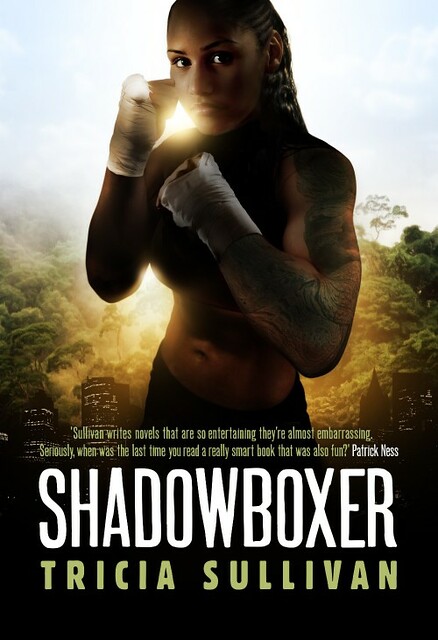 How do martial arts, motherhood and stray cats connect? As Tricia Sullivan explains in her Big Idea piece for Shadowboxer, the connection is real — and relevant to her novel.

When I started writing Shadowboxer in late 2008 I had three small children. I was breastfeeding the youngest. My abdominal muscles were shot. Large chunks of my day were spent crawling around on the floor and I got most of my exercise by pushing a stroller. I was also managing a website for my partner Steve Morris, whom I’d met as a martial arts student. I learned the difference between traditional martial arts and fighting in Steve’s class. It was all made clear to me when an enormous dude dealt with my perfectly-formed punches and kicks by picking me and my karate brown belt up and casually chucking us across the room.

When Steve and I eventually started the website we got a lot of enquiries from people disillusioned with traditional martial arts and looking for a practical way to train for real. Nearly all of those people were men. Some of them were men who trained women. I felt that women were being condescended to by many of these guys. Instructors offered traditional martial arts with little contact or light contact only, or ‘ladies boxercise’ or some canned ‘self-defense’ moves that they taught to women because they themselves had no idea how to fight for real. It wasn’t just in the UK that this was happening. Even though organizations like the UFC and Strikeforce were already big in the US, the focus was in combat sports was heavily male-oriented. Most of the women who got press coverage were ring girls.

I admit that I became frustrated. I got tired of the macho attitudes of many of the martial arts instructors whose commentary and questions came through our site. I was annoyed that an awesome fighter like Gina Carano was getting media attention based primarily on her looks—as if the physical prowess and skill of female fighters meant nothing. And I was sick to death after years of being compared to Buffy the Vampire Slayer by people who thought they were complimenting me.

But I couldn’t do anything about it. With a ruined abdomen and milk-filled breasts, I wasn’t in any position to do hard training. I was living on very little sleep, and I had reproductive hormones running through my bloodstream like crack—only instead of making me high they made me gentle. Hell, if a sentimental ad came on TV I’d be in floods of tears.

The only way I could deal with my frustration was to write about it. I wanted to explore what it might be like for a young woman trying to break in as a fighter, and I wanted to know what would make her want to do that in a culture pitched so hard against her expression of physical violence. I kept asking questions, I listened to the little voices in my head—yeah, I know, that doesn’t sound too good but it’s how I do it—and pretty soon Jade started talking to me.

Jade Barrera is a Dominican-American mixed martial artist—a cage-fighter—but she’s named after the Mexican boxer Marco Antonio Barrera, whose epic 2005 match against Jose Morales made a big impression on me. I based Jade’s persona loosely on a sixth-grade girl in my class in New York City many years ago; I’ll call her L. L was the smallest kid in the class and also the fiercest. She would start it up with people on purpose, just to make sure they knew she wasn’t soft. Except L. was soft. She would bring in pictures of her cat and when no one else was around she’d show them to me and tell me stories of her cat’s exceptional adorableness.

So, in the opening scene of Shadowboxer, Jade sees a martial arts movie star mistreating a stray cat, and she becomes unhinged. She leaves the movie star’s nose somewhere west of his face and finds herself in big trouble with her trainer. He wants to get her away from the media, so he sends her off to his family’s gym in Bangkok, Thailand, for fight experience. In the US, professional fighters have to be eighteen to compete. In Thailand, they start much younger.

Muay Thai is one of the hardest sports on Earth. It’s also a link between Thailand and the rest of the world, with martial artists from all over the world living in training camps so they can eat, breathe, and sleep Muay Thai fighting. This cross-cultural contact drives the plot of the book; it’s while she’s fighting in Thailand that Jade gets caught up in crime with a supernatural bent, crime that will follow her back to the US and change the course of her life forever.

There are a lot of fight scenes in this book. There’s plenty of detail about Jade’s training. But here’s the thing: even back all those years ago, before the current focus on ‘kickass women protagonists’ had taken hold, one thing I knew for sure was that I wasn’t going to let Jade be the only significant female character. Nor was I going to conflate winning fights with being heroic. Because there’s more to being strong than thinking with your fists. Anyway, strength isn’t the only virtue a person can have. There are plenty of admirable things for girls and women—for all people— to do that really have nothing to do with ‘strength’ as such, but everything to do with living honourably in a world full of darkness and compromise. I hope this is reflected in the variety of female characters I’ve written.

I started out asking myself what would make a teenaged girl aspire to be a fighter, and the process of writing Shadowboxer led me and Jade together on a journey through Jade’s own violence and through the violence and evil of others. It’s only on the other side of this violence that Jade finds a fragile understanding of what is worth fighting for in life.

And yes: I do personally happen to think that stray cats are worth fighting for.