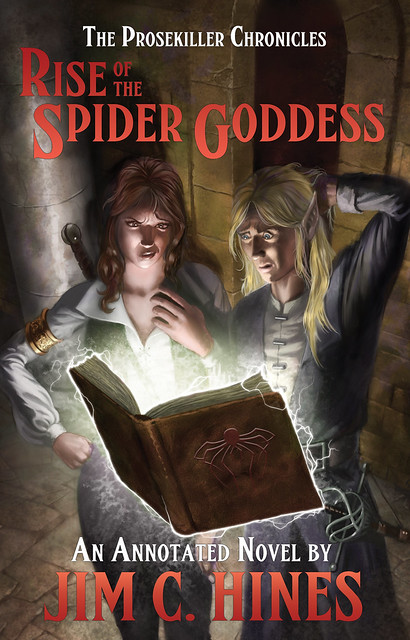 It takes a special kind of author to intentionally release a bad novel — And Jim C. Hines is that author! But he has a reason for doing it, and a way of making that bad novel — Rise of the Spider Goddess — lift itself above its station to offer what turns out to be an encouraging lesson about writing. Here’s Hines to explain.

Let’s get one thing out in the open right now. The Prosekiller Chronicles: Rise of the Spider Goddess (An Annotated Novel) is a bad book.

There were also pixies, a fire-resistant owl who became a falcon later in the book because I wasn’t paying attention, and an EVIL spider goddess named Olara.

For years, I kept this book buried in the darkest, dustiest corners of my hard drive, guarded by poison needle traps and rust monsters and worse. I swore no one would ever know just how bad my first attempts at writing had been. I wanted people to think I had sprung into this world as a fully-formed professional author, a brilliant writer of flaming spiders and nose-picking jokes and so on.

That’s total goblin dung. Every author I’ve spoken to writes crap from time to time, especially in the beginning. We all have a Rise of the Spider Goddess buried away somewhere. The idea that anyone is born with an innate ability to write brilliant fiction is a myth.

The idea behind publishing this book is all about busting that myth and owning the crap. Not just owning it, but laughing about it. I’ve added more than 5000 words of commentary and snark at my younger self’s writing, from his paper-thin worldbuilding to the over-the-top Evilness of the Evil Minions of Evil to his valiant attempt to incorporate every fantasy cliché he had ever encountered.

But even as I cringe over that kid’s lousy writing, even as I poke fun at his refusal to revise or proofread, I’ve also got to respect his determination, and to acknowledge that this was a beginning. This is how writing careers get started, not with big book deals and bestseller lists, but with people sitting down to write about their favorite D&D character, because they’ve got a story to tell, and because they just plain don’t know any better.

That deserves to be celebrated and shared. And yeah, laughed about. Because how can you not laugh at lines like this?

“Sitting casually on the floor, a guard sat honing a dagger.”

For writers, I hope this book serves both as 50,000 words of what not to do, but also as recognition that we all start somewhere, and often that place isn’t very pretty.

For my fans, I figure it could be interesting to see where my career really began. You’ll see the seeds of ideas that crop up in my later work, particularly the goblin books. You also see the beginning of my voice, as well as my habit of including groin-kicks in every book I write. (Because kicking an elf in the groin is just plain funny.)

For everyone else, well, have you ever done a group reading of The Eye of Argon? Sat down for a Mystery Science Theater marathon? If so, then hopefully you’ll have fun with this one.

I want to make it clear that I’m not advising my fellow authors to run out and publish all the broken trunk stories we locked away when we were learning to write. But I think there’s a lot to be said for acknowledging those early efforts. For sharing and even celebrating those beginnings.

Screw that. Writing a bad book is nothing to be ashamed of, because dammit, I still wrote a book. Then I wrote more of them. And with each one, I got better.

Rise of the Spider Goddess is a bad book, and I’m proud of it. I hope the notes and annotations I’ve added are enough to transform it into something you can share and laugh about and celebrate with me.