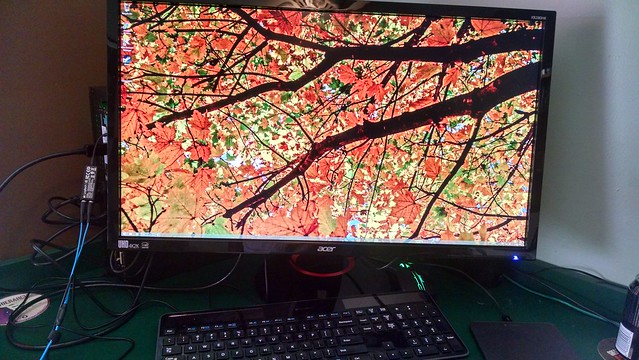 My Dell all-in-one desktop finally stopped playing nice with me — it had a persistent memory issue that finally sent it into permanent blue screen mode — so it was time to go ahead and get a new desktop computer. I knew that this time around I wanted to get a computer with a little more oomph than the Dell; it was a perfectly well-specced computer but it choked on the latest games. At the same time I knew I didn’t want another monster tower; aside from not having a whole lot of space on my desk, as a 45-year-old man I’ve gotten past the age where I want the computer equivalent of a street racer in my office.

So I went with one of these, which despite the hype of the site I just linked you, is a compact, reasonably-demure-for-a-gaming computer. To the base model I added a couple of tweaks (a solid state drive and liquid cooling primary among them); I would just as soon had the garish green side panels go away, but inasmuch as the computer now sits directly behind the monitor, it’s not really that much of a big deal. It’s now chugging away (relatively quietly, thanks to the liquid cooling) on the desk, and so far, so good.

Because the new computer can push a whole lot of pixels, I also splurged and got a 4k monitor, specifically this one. It features something called G-Sync technology, which basically is a way to make video games look smoother and nicer, even when the framerate drops. We’ll see if it works (the only games I’ve played on the computer so far is Unreal Tournament 2004, which doesn’t really need any help for high framerates, because it’s ten years old).

I will say, however, that the monitor is kinda gorgeous due to pixel denseness — I basically have to sit a couple inches from the monitor in order to see individual pixel (and I won’t do that because, seriously, eye fatigue). It’s not a perfect screen — it’s a “twisted nematic” display which means that depending where you sit you’ll see some color shifting at the edges — but it’s still pretty sweet.

Anyway: Meet my Christmas present to me.