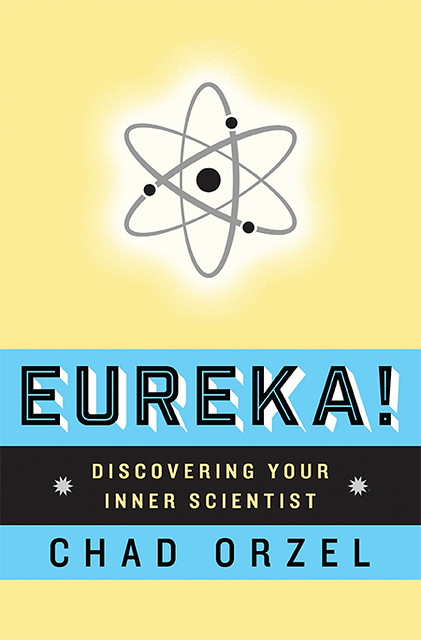 There is a scientist inside you, just waiting to come out! No, not like the creature in Alien. This is a good thing. Chad Orzel, author and professor of physics, explains why in his new book Eureka!, and also here in this big idea post.

It seems very appropriate to be writing about the new book in a feature called “The Big Idea,” because I can say without hyperbole that it’s a book about the biggest idea in the history of humanity.

OK, maybe there’s a trace of hyperbole there, but just a little. Eureka is about an idea that is radically transformative on every level from individuals to the entire human species. It’s not an Internet technology, or a particular fact, but a process:

You look at the world around you,

You think about why it might work the way it does,

You test your theory with experiments and further observations, and

You tell everyone you know the results.

This four-step process is the essential core of all of science. More than that, it’s central to just about everything we do. Science leads directly to all the technologies that have allowed a not especially threatening species of hairless plains apes to thoroughly dominate the surface of the planet (for good or ill). More than that, science is central to activities that we do just for fun.

That may seem like an odd thing to say, given the distant relationship most people have with modern science. When I tell people I’m a physicist, one of the most common responses is “You must be really smart. My brain just doesn’t work that way.” Which is flattering to my nerd vanity, but just not true—we all use the process of science every day, often in pursuit of hobbies that we wouldn’t think of as scientific. And many of the great discoveries in the history of science followed paths analogous to many of the things non-scientists do for recreation.

A good card player in a game like bridge, for example, can deduce almost exactly who has what cards from exceedingly limited information—the bids made by the other players, and the conventions of the game. Astronomers like Vera Rubin used exactly the same process to deduce the existence of vast amounts of invisible “dark matter” in the universe, five times as much of it as the matter we do see.

Someone passing time on an airplane by doing the crossword puzzle in the in-flight magazine makes use of the same process that led physicists to quantum mechanics. The idea that particles behave like waves wasn’t anybody’s first guess, but it’s the inevitable result of fitting together indirect evidence, in the same way that when all the “Down” answers fit nicely, you know the annoying pun in 6-across is also correct.

Even the simplest of hobbies, stamp collecting, has a key place in science. We remember Charles Darwin as the father of evolution not because he was the first person to write about evolution—his own grandfather was writing poetry about evolution in the 1790’s. Darwin’s scientific fame is the result of decades spent collecting facts about the natural world and studying the patterns that emerge when they’re put together. No one observation points conclusively to evolution, in the same way that no single stamp makes a collection, but the mountain of observations Darwin collected made a case that was overwhelming in 1859, and has only gotten stronger.

Eureka tells these stories, and many others. It’s broken into four sections—Looking, Thinking, Testing, and Telling—each highlighting a particular aspect of the scientific process, and connecting great scientific discoveries with ordinary hobbies that use similar processes. Whether you’re cooking, or playing sports, or just reading mystery stories, you make use of the same bag of mental tricks scientists use to probe the mysteries of the universe.

The goal of all this, as the subtitle says, is to help people recognize that we all have an inner scientist, and make use of the process of science. That realization allows a greater appreciation and understanding of scientific discoveries both new and old. More than that, though, I hope it encourages everyone to make more conscious use of their inner scientists: Look at the world. Think about why it works that way, and what you could do to make it better. Test your theory by trying things out. And if you find something that works, tell the rest of us about it, so we can all benefit.

The look-think-test-tell process of science is at the heart of every great human advance, from cave paintings, to Stonehenge, to the Large Hadron Collider. It’s the most powerful tool we have for understanding how things work, and how to change them, and used more widely it can help make the world a better place for all of us.

And that is genuinely a very Big Idea.

Watch these videos related to the book and this Big Idea piece. Visit the author’s blog. Follow him on Twitter.