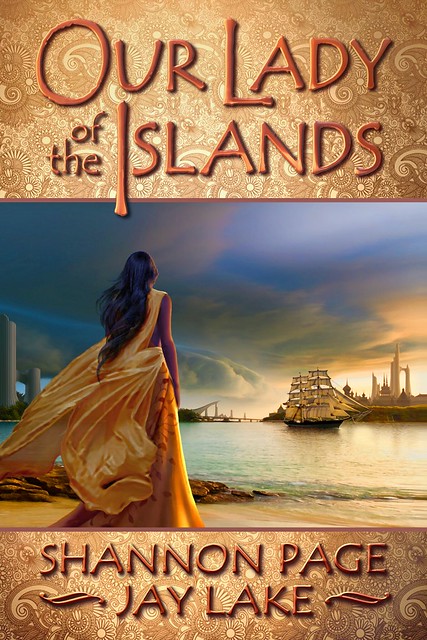 Life takes you places you don’t always expect, and it can do it at any age. So Shannon Page found out when she and the late Jay Lake sat down to write Our Lady of the Islands. That knowledge informs the book and the people in it, as Page explains below.

I’m forty-eight years old. I got married in October; I’m going to become a first-time aunt next spring. I just taught myself how to barbecue (canning will come next). I recently started acquiring and editing books for a small press. My own debut novel came out last year, and now Our Lady of the Islands has received some very nice attention from Publishers Weekly and several other reviewers. I even took up swimming a few years ago and am sometimes teased by fellow swimmers to “slow down.”

Such wonderful things! All accomplished in my late forties.

Now, I love coming-of-age books: those powerful stories where a young person overcomes adversity and figures out who they are and what they need to do in the world. But when Jay Lake and I sat down to write Our Lady of the Islands, and he began the brainstorming with “A young woman…”, I interrupted him at once.

“Jay,” I said. “We’re both over forty. Our lives are fascinating, complex, and changing all the time. We’re still interesting—and so are all our friends. Let’s write about someone who’s not sixteen. Or even twenty-six.”

To Jay’s credit, he thought that was a great idea. Thus was born Sian Kattë, a middle-aged businesswoman whose comfortable life is disrupted quite violently, leaving her to sort out…well, who she is and what she needs to do in the world. She suddenly acquires the power of healing by touch—a power she has not asked for and cannot understand, much less control.

Sian initially resists this enormous disruption—who wouldn’t?—but the world won’t leave her be. As her life falls apart around her and she becomes entangled in political and religious intrigue, she eventually realizes that she needs to let go. Answers that worked perfectly well in her twenties and thirties no longer fit her story. Sometimes, things need to break in order to be healed.

Though I wasn’t given any magical powers in the process, I faced much the same challenges back at the beginning of my forties. I had a comfortable home, a longtime marriage, a stable and safe career. And none of it was working, though I was in complete denial about it. By the time Jay and I had that initial conversation, that life had ruptured completely. I’d filed for divorce, moved to another state, and was pouring myself seriously into my writing. Jay’s path, though different in its details, was similar; he called it “taking a left-hand turn when the road goes straight.” He already knew his life might well be cut short by cancer. He didn’t want to waste any of it stuck in old paradigms.

We wrote the novel, passed the manuscript back and forth several times, sent it out to a few first readers…and then, guess what? Our lives were not through changing. Jay and I ended up parting company, and the manuscript sat, trunked, until early last year, when Jak Koke, managing editor of Per Aspera Press, asked me, “What ever happened to that book you wrote with Jay? Can I read it?” A year later, he made us an offer…contingent on some major reworking.

Deep into his final struggle with metastatic colon cancer, Jay was happy to see the book marketed, but made it clear that he would not be able to work on any revisions. So I agreed to take that on, hoping to get the book out in June, for Jay’s birthday. Unfortunately, it needed more work than that tight deadline permitted, so the publication date was pushed back.

Jay entered hospice on May 21, and died on June 1.

Though this version of the novel diverges in some ways from the draft he and I worked on, I think he would like it. His world and our characters remain; the story is still the one we set out to write. I am deeply sad that he wasn’t able to read it. This book quite literally wouldn’t exist without him. But I do hope it does honor to his memory.