In Which I Try the Mirror Universe Coca Cola 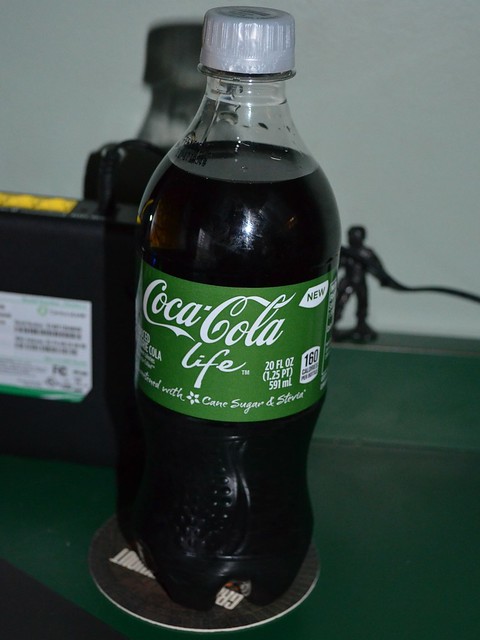 More commonly known as “Coca Cola Life,” which is their reduced-calorie offering, sweetened with cane sugar and stevia. I call it Mirror Universe Coke because the label is green, rather than the more familiar red Coke branding. I’m not a fan; green Coke labels are Just Not Right. Green is for clear sodas and/or Mountain Dew and its various cognates. I was not aware I had a strong feeling about this until now, but apparently I do.

And how is Coca Cola Life? It’s fine. Apparently some people are very sensitive to the stevia aftertaste, but I don’t appear to be one of them, so that didn’t bother me. To me it tastes pretty much like Coke should, and it has a mouthfeel somewhere between regular Coke and Coke Zero. At this point, having drunk Coke Zero for as long as I have, regular Coke feels kind of syrupy, so I’m not a huge fan; Coke Life is rather less so.

That said, I don’t see myself drinking much Coke Life. It’s not any better, taste-wise, than Coke Zero, and Coke Zero has the advantage of having no calories in it, whereas Coke life has 160 calories per 20 oz. bottle. That’s less than regular Coke, but it would still add up pretty quickly for me.

Indeed, I kind of wonder who the market for Coke Life is; I think you’re either fine with regular Coke or you don’t want any calories at all. Coke tried the “reduced calorie” thing before with C2, which didn’t stick around long, in part because Coke Zero came out in the market at roughly the same time. Maybe the cane sugar/stevia mix is supposed to be a draw (C2 was corn syrup and aspartame), but outside of the hipster “Mexican Coke” crowd, I’m not sure anyone will care, and those folks already drink Mexican Coke.

So, yeah: Coke Life is all right, and I wouldn’t have a problem drinking it, but I wonder who it’s really for. I’ll stick with Coke Zero, personally.

← What Am I Up To? Oh, Nothing, Just Starting Fires on Twitter
On the Subject of Last Minute Scalzi Gifts →