Plans! Dreams! Physical manifestions, in text and flesh! For 2015, here’s what I got so far.

These are confirmed, i.e., have solid publication plans/dates.

These are unconfirmed, i.e., scheduled to be written this year but no solid publication plans/dates.

These are things I’m thinking of doing/may or may not do, depending on various events falling one way or another.

Things I won’t be doing:

As always, you can visit my Scheduled Appearances page for details. At the moment, confirmed events include Dearborn, MI, Greenville, OH, Perth and Melbourne in Australia, and Charlotte, North Carolina. It’s likely I will add Chicago and Spokane to the schedule (for Nebula Weekend and WorldCon, respectively), possibly Los Angeles (for the LA Times Book Festival) and there are a few other dates I’m mulling, but nothing else is confirmed at the moment. When they are, of course, I will let people know.

Oh, yeah: I’ll also be on a boat the first week of February.

So, those are the plans for 2015 at the moment. I have a whole year to see how much of it actually gets done. Looking forward to it. 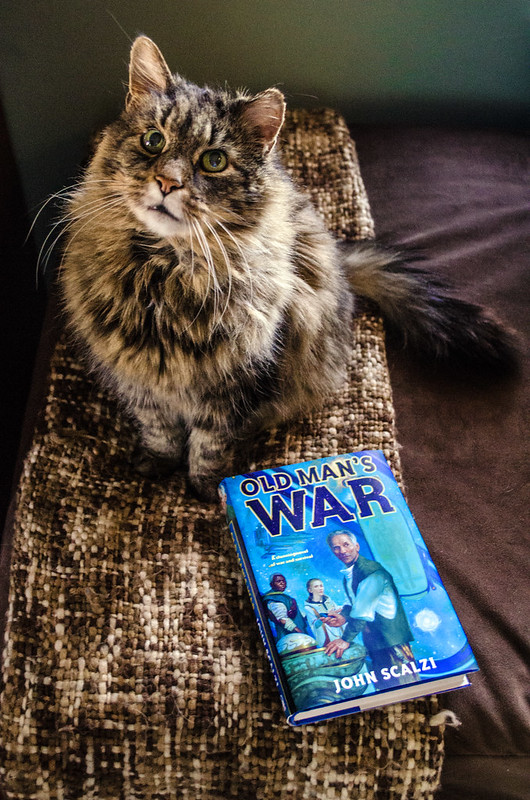 Ten years ago today, Tor officially released Old Man’s War into the world, and so today is my official ten year anniversary of being a published novelist, and the anniversary of my entrance into the ranks of professional science fiction writers. Note that this “official” date is all kinds of leaky; Old Man’s War was popping up in bookstores a couple weeks before the actual pub date (which was fine by me because holiday sales), Tor bought the book from me two years before that, I had one science fiction story published in Strange Horizons in 2001 (which at the time did not qualify as a “pro” sale by SFWA), and of course in 1999 I self-published Agent to the Stars on my Web site (and serialized OMW on it in 2002).

Be that as it may, when I think of my professional science fiction career launching, January 1, 2005 is the date I think of. So there you have it.

It has, unambiguously, been a good ten years for both me and the book. In the case of the book, it was nominated for the Hugo and got me nominated for the Campbell (the latter of which I won that year), topped “best of the 21st century” lists from Locus and Tor.com (caveats on those here), spawned a very successful book series, which includes New York Times bestsellers and Hugo nominees, has been translated into 21 or 22 languages at this point (I’ve lost count), been optioned for TV and film, sold well in its first year and continues to sell, very well, year in and year out. It’s my most successful book, and I suspect likely to be the one I’ll be remembered for when all accounts are tallied and closed out.

Which, of course, is perfectly fine by me. A couple of years ago, when I was on the JoCo Cruise for the first time, I sat on a panel of writers, and an audience member asked the panel whether any of us ever worried about being thought of as a “one hit wonder.” My response was to say that I had that “one hit” in Old Man’s War, and what that “one hit” had done was to offer me the sort of notability and stability that allowed me to write pretty much whatever I wanted from that time forward — it was the foundation on which everything else good in my fiction writing career was built upon. Having “one hit” isn’t a curse unless you want it to be. It can be an opportunity for many other things.

As it has been for me. Old Man’s War, and the fact that creative and cool people doing interesting things really like the book, has opened up a whole lot of doors for me. I’ve gotten to do any number of things I never would have been able to do, and gotten to meet so many people I like and admire, because of that novel and what’s flowed from it. Old Man’s War changed my life, and for the better, and I love that it has.

(With all that noted, it doesn’t feel like ten years has passed. But then I suspect on a day to day basis it never really feels like time passes; it’s only when you look up and note a milestone that you tally up the distance. I’ve gone from being one of the proverbial new kids in science fiction to arguably embodying the current iteration of the genre’s “establishment,” with all the positive and negative connotations that such a thing has. I’ve been in the genre long enough now that I’ve been considered an influence to some, and everything that’s wrong with the genre today to others. I have no control over either, so I tend not to worry about them, although I do admit to sometimes going out of my way to annoy the people who don’t like me, and gleefully so. It’s a weakness.)

Ten years on, I think OMW has aged pretty well, although there are some things I think show its age a bit, like calling portable information devices “PDAs,” which was a term with some currency in 2001, when I wrote the novel, and none whatsoever now. Nevertheless I’m kind of stuck with it for however long the series goes. I might also retool Sgt. Ruiz’s speech to the cadets, although it would still end the same way (with the Willie Wheelie scene). Also, knowing what I know now, i.e., that the book would spawn a series that would span a decade and six books to date, I might have spent a little more time making Earth feel more future-y, and less like the Earth of 2001 plus a single space elevator.

(I will note that a few years ago, when Newsweek went all-digital, I got ribbed for having a physical copy of the magazine in the book’s recruiting station. But now here in 2015, Newsweek sells print copies again! I am vindicated.)

What I am most proud of OMW, ten years on, is simply the fact that it seems to have stayed. Which is to say that people still read it, people are still discovering it, and people are still sharing it. Not every book does that. I’ll go ahead and take some of the credit for that — it’s a pretty good book — but I’ll also go ahead and reiterate something I always point out, which is that OMW had a considerable amount of luck going for it. Its persistence on bookshelves and in the science fiction conversation was in no way predestined or certain (nor was mine, to be sure). I am grateful for that luck, and the opportunities I have had to build on it, both with OMW and its series, and with the rest of my career.

So, if you ever bought or read a copy of Old Man’s War, thank you. You’ve helped to make this last decade wonderful. I am most appreciative. Here’s to another decade — or two! Or three! Heck, five or seven or ten! — in each others’ company.

(P.S.: Curious what my thoughts were on this five years ago? Here you go.)