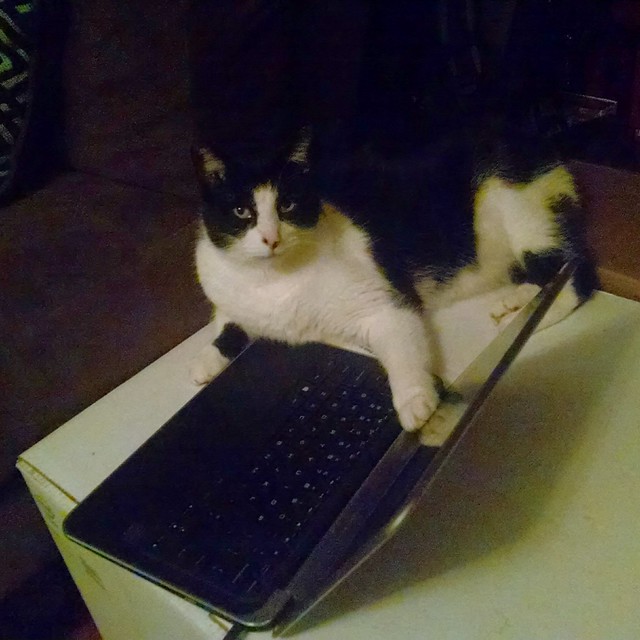 “What? Why yes, I am writing up a little something, just a novel that will forever change the way people — and by people I mean cats — think about the world, the universe, and existence itself. I call the novel Tuna With Thumbs. No, you can’t look at it. It’s not done, and anyway you’re a human. It just wouldn’t be the same.”

Everyone’s a writer in this house, it seems. 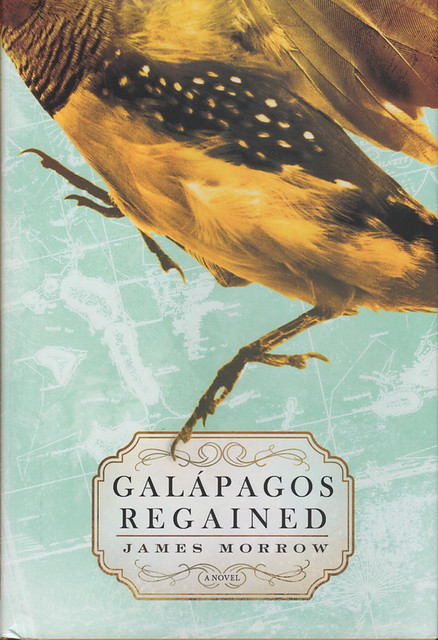 Welcome to 2015, and the very first Big Idea of the year. And who should we have to kick things off but James Morrow, an author who regularly thinks about the biggest ideas of all: Gods, living and dead, and the implications thereof. Is it any surprise that his latest novel, Galápagos Regained, trains its sights on the question of the existence of God? But what may surprise you is how Morrow, through the writing of this novel, has come to think about the idea of God itself.

Laced with satire and leavened with a touch of fantasy, my tenth novel, Galápagos Regained, is an historical epic about the coming of the Darwinian worldview. The plot turns on an outrageous competition established in 1848 by the hypothetical Percy Bysshe Shelley Society. My fictional Great God Contest is vaguely based on the famous Longitude Prize sponsored throughout much of the eighteenth century by the British Parliament with the aim of inspiring a simple and practical method for determining a ship’s position on the open sea. (As most of you know, the purse was eventually awarded to John Harrison in 1765 for his chronometer.) My twenty Byssheans—an association of rakehells and flâneurs occupying a manse in the heart of Oxford—propose to bestow an enormous cash bounty of £10,000 on any theologian or philosopher who can prove, or disprove, the existence of God.

Galápagos Regained features as its heroine the intrepid Chloe Bathurst, a successful Victorian actress who, owing to her outspoken political views, loses her position with London’s Adelphi Theatre Company. Chloe soon finds employment as a governess at Down House, the estate of Charles Darwin, though her job is not to educate his children but to nurture the live specimens he brought back from the Galápagos Islands, the mythic “Encantadas.” (The fine print on my poetic license permits me to imagine such a menagerie.) Eventually my heroine gets wind not only of the Great God Contest but also of her employer’s nascent theory of natural “descent with modification”—an incendiary notion that he has resolved never to publish during his lifetime, lest he suffer the censure of his dear wife, his other Christian relatives, and the world at large.

Eager to settle her prodigal father’s debts and keep him out of prison—and equally eager to give a headline-grabbing performance before the Shelley Society—Chloe resolves to enter the competition and offer up Mr. Darwin’s species theory as an implicit disproof of God. Her chances of winning, she imagines, are good. Not only does Darwin himself regard “descent with modification” as a big problem for conventional theism, but as an accomplished actress she can surely make a persuasive presentation. There’s just one catch. Darwin is scandalized by the Great God Contest, and he refuses to lend Chloe the giant tortoises, exotic marine iguanas, and rare tropical birds that she wishes to parade before the judges.

Our heroine hits on an audacious scheme. With the sponsorship of the Shelley Society, she will mount her own expedition to the Galápagos archipelago, so she can collect the sorts of live, illustrative specimens whose evolutionary significance she learned about at Down House. So now the novel becomes a deuces-wild adventure yarn—a nod to Candide, a tip of the hat to Around the World in 80 Days, a wink in the direction of Indiana Jones—and remains in that mode for three hundred pages, as Chloe traverses the Atlantic on a brigantine, steams up the Amazon River on a packet boat, crosses the Andes in a flying-machine, and sails to the Encantadas aboard a replica of Noah’s ark.

As with most of my projects, even high-concept extravaganzas like Galápagos Regained, I did not fully anticipate the implications of my experimental design. But that’s nature of literary thought-experiments, isn’t it? You don’t know the results until you actually play the Gedanken game. Many surprises awaited my heroine—and her author—as she pursued her quest for the Shelley Prize.

Several months into the project, I realized that Chloe herself should not harbor a strong opinion about the God question. She’s not a philosopher, after all; she’s a survivor and a schemer, galvanized by the thrill of the hunt, the heady scent of her Creator’s blood. In conceiving Chloe this way, I believe I avoided turning Galápagos Regained into a facile allegory on the contemporary clash between the New Atheists and their detractors.

Surprise number two: I had assumed at the outset that Chloe would ultimately make her case against God before the Shelley Society back in Oxford, and that this proceeding would occur largely off-stage, the reader having already endured a surfeit of theology. But then I realized that the final showdown could—and should—occur on the archipelago itself, as Chloe is called upon to defend her two best friends against accusations of sacrilege (a capital crime on Galápagos) before a courtroom filled with indignant Mormon colonists who’ve appointed themselves judges and barristers. And what better rebuttal to the charges could Chloe devise than to demonstrate that blasphemy is an incoherent concept, its victim being nonexistent? And so the antepenultimate chapter of Galápagos Regained offers readers a demented foreshadowing of the Scopes Trial, with Chloe holding forth on the local Encantadas reptiles and birds in light of the Darwinian Tree of Life.

Final surprise: before the composition process ended, I discovered what I, James Morrow, really think about the question of the divine. No, I haven’t abandoned my atheism. But I’ve decided that, up to a point, the God concept is good to think with (after which it becomes terrible to think with, as we see demonstrated every day in the political arena). I mean, look how far Spinoza got with his eccentric pantheism. Look at how much Newton achieved by fancying himself God’s avatar. Consider the heretical rhapsodies of Dante Alighieri, John Milton, William Blake, and Shelley himself (devotee of a religiously-inflected, whacked-out Epicureanism). In other words, I’ve decided there’s an ontology of nonexistence. I’m not kidding. An ontology of nonexistence. God is a wholly human construct, but he occupies a different plane of nonexistence than do Tinker Bell and the Tooth Fairy. And it’s at this juncture, I suppose, that I part company with the New Atheists, much as I admire their project and wish confusion on their enemies. But that is another day’s discussion.