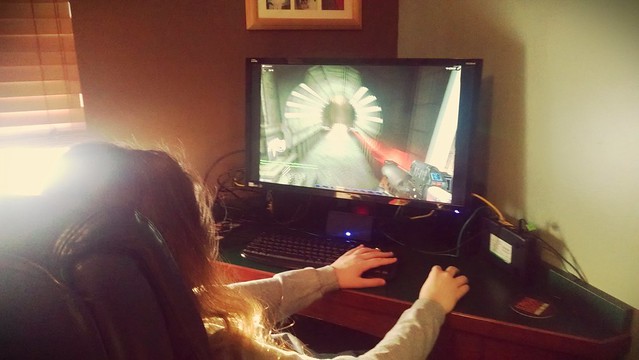 No school today because of cold (and likely no school tomorrow, since it will be even colder), so what better day for Athena to run about in Unreal Tournament 2004, killing bots? None! None more better, I say!

Also, Unreal Tournament 2004: Still the best arena shooter, especially if you don’t actually want to play against other humans, because they are usually irritating butt monkeys.

In fact the last couple of days, when I’ve not been writing on The End of All Things, I’ve been playing video games, which explains my scarcity here (I’ve most recently been playing Dishonored, if you’re curious). I’m probably going to give games a couple night’s rest, however, because my wrist is reminding me that mice aren’t actually good for it, especially when I play obsessively for hours at a time. RSI, man. It’ll get you.

50 thoughts on “Meanwhile, at the Scalzi Compound”