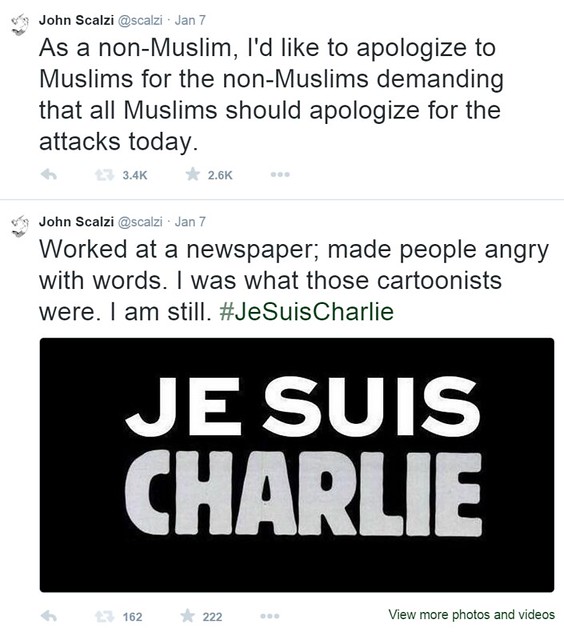 Disorganized because every time I try to organize my thoughts on these topics recently they kind of squirm away. So, fine, disorganized it is, then.

1. As noted in one of the tweets shown above, as a newspaper journalist, as well as, you know, writing here, I’ve done my share of enraging people with words, by mocking ideas that they hold dear, because I thought they deserved mocking. I have had my share of angry responses and even the occasional threat, and my response to those typically has been to poke harder. When I took up the #JeSuisCharlie hashtag, that’s what it meant to me. I’ve been that guy.

2. I also recognize that I know almost nothing about Charlie Hebdo, the newspaper, or the tradition of satire and comment that it exemplifies in French culture. From where I sit, a lot of what I’ve seen of it looks kind of racist and terrible. And I understand that Charlie Hebdo didn’t just go after Islamic extremists, and that it went after other groups and people just as hard (and just as obnoxiously). But it reminds me that “we go after everyone equally” doesn’t mean that I feel equally comfortable with all of it, or that it has equal effect. When I say #JeSuisCharlie, it doesn’t mean I want to create or post what I think are racist caricatures and justify them as satire, applied on a presumed equal opportunity basis.

3. But then again my comfort level is about me, not about Charlie Hebdo or anyone else. Free speech, taken as a principle rather than a specific constitutional pratice, means everyone has a right to share their ideas, in their own space, no matter how terrible or obnoxious or racist or stupid or inconsequential I or anyone else think they and their ideas are. I also recognize that satire in particular isn’t about being nice, or kind, or fair. Satire is inherently exaggerated, offensive and unfair, in order to bring the underlying injustice it’s calling attention to into sharper relief. Trust me, I know this. (Satire also has a high failure rate, and the failure mode of satire, like the failure mode of clever, is “asshole.”) A lot of what I’ve seen from Charlie Hebdo isn’t for me and seems questionable, and that’s neither here nor there in terms of whether it should have a right to be published.

4. At the moment there’s an argument about whether news organizations are being cowardly about showing the Charlie Hebdo covers that allegedly were part of the reason it was attacked — the ones with visual depictions of the prophet Muhammad, who many Muslims feel is not supposed to be depicted visually (let us leave aside for the moment the discussion of whether all Muslims feel this way (they don’t) or whether Muhammad has been visually represented in the past even in Muslim art (he has, here and there) and focus on the here and now, in which many Muslims believe he should not be represented visually). The argument seems to be that by not showing the covers (or Muhammad generally), newspapers and other media are giving in to the extremists.

I’m not going to argue that very large media companies don’t have multiple reasons for what they do, including making the realpolitik assessment that displaying a Charlie Hebdo cover puts their employees (and their real estate, and their profits) at risk for an attack. But a relevant point to make here is that aside from the asshole terrorists who murdered a dozen people at Charlie Hebdo, there really are millions of Muslims who are just trying to get through their day like anyone else, who also strongly prefer that Muhammad is not visually represented. It’s not a defeat for either the concept or right of free speech for people or organizations to say they’re factoring these millions or people who neither did nor would do anything wrong into their consideration of the issue.

5. Which is a point that I think tends to get elided at moments like this — free speech, and the robust defense of it — does not oblige everyone to offend, just to show that one can. I can simultaneously say that I absolutely and without reservation have the right to visually depict Muhammad any way I choose (including in some ways devout Muslims, not to mention others, would consider horribly blasphemous), and also that, with regard to depicting Muhammad, as a default I’m going to try to respect the desire of millions of perfectly decent Muslims, and not do it. Because it’s polite, and while I’m perfectly happy not to be polite when it suits me, I usually like to have a reason for it.

6. But isn’t Muslim extremists shooting up a newspaper a perfect reason? For some it may be, and that’s fine for them. But I tend to agree with Kareem Abdul-Jabbar here: shit like this isn’t about religion, it’s about money and recruiting for terrorist groups who use religion, at best, as a very thin binding material for their more prosaic concerns. I’m also persuaded by Malek Merabet, brother of Ahmed Merabet, the policeman and Muslim who was killed by the terrorists. He said: “My brother was Muslim and he was killed by two terrorists, by two false Muslims.” In which case, why offend the good and decent Muslims to get back at two very bad and false Muslims. I’m a reasonably clever writer; I have the capability to make my point regarding these asshole terrorists without a gratuitous display of Muhammad.

7. Hey, did you know that according to the UN, Christian militia in Central African Republic have carried out ethnic cleansing of the Muslim population during the country’s ongoing civil war? And yet I hear nothing from the so-called “good” and “moderate” Christians around me on the matter! Why have the “moderate” Christians not denounced these horrible people and rooted them out from their religion? Is it because maybe the so-called “moderate” Christians are actually all for the brutal slaughter? Christians say their religion is one of peace! And yet! Jesus himself says (Matthew 10:36) that he does not come to bring peace, but the sword! Clearly Christianity is a horrible, brutal murdering religion. And unless every single Christian in the United States denounces these murders in the Central African Republic and apologizes for them, not just to me but to every single Muslim they might ever meet, I see no reason to believe that every Christian I meet isn’t in fact secretly planning to cut the throat of every single non-Christian out there. That’s what goes on in those “churches” of theirs, you know. Secret murder planning sessions, every Sunday! Where they “symbolically” eat human flesh!

Please feel free to cut and paste the above paragraph the next time someone goes on about how all Muslims must do something about their co-religionists (of which there are more than a billion, all of whom apparently they are supposed to have on speed dial), and how Islam is in fact a warrior religion, and look, here are context-free snippets from the Koran, and so on and so forth until you just want to vomit from the stupidity of it all. And don’t worry, there are similar cut-and-pastes for any major religion you might want to name, as well for those who have no religion at all, although I’m not going to bore you with those at the moment.

The point is that, no, in fact, I don’t see why I or anyone else should demand that every Muslim is obliged to denounce and apologize for any bad thing that happens in the world done by someone who claims to be doing it in the name of Allah. As it happens, many prominent Muslims and Muslim organizations did condemn the Charlie Hebdo attacks, just like pretty much everyone else. But silence isn’t complicity or endorsement, and if you demand that it is, you may be an asshole.

8. If there is one silver lining to the horribleness of the Charlie Hebdo massacre, it is that people have been confronted with the fact of something they take for granted — the right to say what they want to say, how they want to say it — is something that others will literally kill to punish. That Charlie Hebdo is a problematic example — that is offensive, and intentionally so, and it does make people uncomfortable and angry — is, well, good isn’t the right word. Instructive. Sometimes we have to be reminded that free speech isn’t just for the speech we like, or the speech that’s easy to be reasonable about.

At the same time it’s okay to ask if this welcome outpouring of solidarity is because free speech was attacked, and it was decided that it was worth fighting for, or because a newspaper that mocked Islam was attacked by gunmen purporting to be Muslims, and that this may be less about free speech than another front in a religious/ethnic clash of culture.

My thoughts are that it’s probably some amount of both, and that neither is cleanly delineated. The two men who shot up Charlie Hebdo say they were Muslim; so were some of the people they shot. Those people — the Muslims who died — have been mourned, at least it seems from here, equally with all the other dead. They haven’t been pushed out of frame for a convenient narrative.

And maybe that’s part of the silver lining to this very dark cloud, too — that this isn’t just “us vs. them,” or at least that “us” now contain people in it who might have previously been considered “them.” And that all the people who are saying #JeSuisCharlie, and #JeSuisAhmed, or who are standing for free speech, or any combination of the three, are standing in memory of them as well.