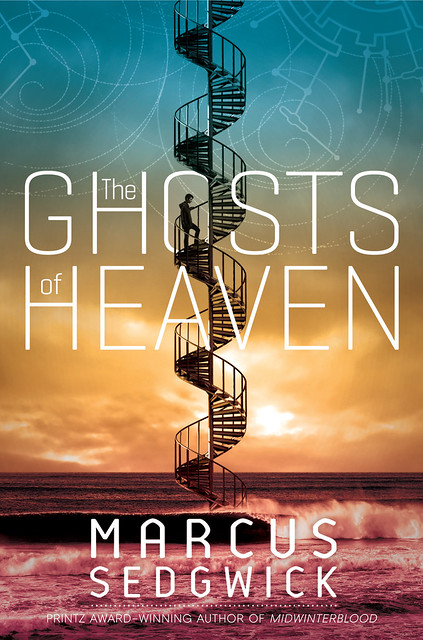 You ask questions, sure. But have you asked The Question? You know, the question that’s so important it requires capital letters. In this Big Idea, Marcus Sedgwick is addressing The Question, and how it relates to his latest novel, The Gates of Heaven.

“What are we doing here?” A pertinent question at times, for example, when you find yourself trying to shop on 5th Avenue on Christmas Eve, when your car breaks down on the New Jersey turnpike, or when you attend a school reunion. However, even more than that, “what are we doing here?” is one of the most fundamental questions in life, one that everyone must have asked his or herself at some point. You might even argue that it’s The Question.

Very often, The Question first enters our heads during the teenage years; a time apparently calculated for no other reason than to get us worrying about the really big things in life – which we can summarise as being Love and Death. I think The Question defines two kinds of people – that is to say, there are two kinds of reaction to it. The first kind of person is so scared by it, by the potentially nihilistic chasm that yawns wide at its consideration, that he or she then determines never to think about it again, and spends the rest of their life making sure they fill their time and their mind with everything and anything, noble or mundane, to ensure that never happens. The second kind of person spends the rest of their life trying to answer it.

Writers, I guess, belong in the second category, because it’s my belief that all writing is an attempt to find an answer. If that sounds like a big and somewhat pretentious claim, well, so be it. You might argue that not all books seem to be deeply philosophical tomes, but I still argue that even a funny, flippant or feeble book is still trying to work out what it means to be human in some specific way or other, and why the Hell are we here.

So speaking of big and somewhat pretentious ideas, this new book of mine is unashamedly prodding and poking at The Question. You’ll notice I don’t claim it answers it. That’s because I think it’s the job of writers to ask questions, not to provide answers. That’s the job of philosophers, preachers and politicians, and you can take your pick of the ones you trust from that list. But given that I’ve just said that answering The Question is precisely what all writing is trying to do, I should at least give a bit more detail on the particular slant I’ve taken.

Along with love and death, one other thing foisted itself on my psyche when I was a teenager – and it might sound strange but that thing was the rather elusive image of the spiral. A few years after I became a writer (oh Lordy) I started thinking it would be good to write a novel about this image, or symbol, since I had never managed to rid myself of my obsession with it. But, it being patently absurd to write a novel about a geometric shape, it took me a good few years to find an approach to making a book that allowed me to muse upon the meaning of the spiral in the way I wanted to.

So why the spiral? What’s so special about it? Well, as the years went by, I discovered I wasn’t the only one who’s felt that this beautiful image has something very pertinent to say in reference to The Question, to who we are as a species, at what we try to do, and how we try to survive and explore. Cultures from all epochs and all parts of the world have ascribed meaning to the spiral, occasionally with evil connotations, but much more often with more noble aspirations. From primitive cave and rock art, found in countless forms throughout nature, in mathematics and the sciences, and from the smallest scale (think of DNA) up to the immense (we live in a spiral-armed galaxy), the spiral is to be found waiting patiently for us to ascribe it meaning.

So, what is so special about it? I think it’s two things. First, the spiral is simply an innately beautiful shape, but secondly, it’s innately mysterious. The spiral is a symbol of infinity – all other geometric shapes can be depicted in their entirety; the square, the triangle, the circle and so on, but you can only ever depict part of the spiral, and thus the implication of the infinite, and therefore, of the mysterious, and in that most wonderful of words, the ineffable – that which may not be known. And that’s what life ultimately is too – ineffable.

So why are we here? We can only really guess at answers, and amuse ourselves by finding the ones which satisfy us best, unless or until we cross the threshold to the infinite and are rewarded with an answer. Or with that yawning nothingness. And in the meantime, books are pretty much the best way to prod and poke at The Question, either as reader or writer. As Michael Moorcock once wrote, “I think of myself as a bad writer with big ideas, but I’d rather be that than a big writer with bad ideas.” Absolutely right. If we only get one trip around the block, I’d rather not waste too much of it on Christmas Eve shopping on 5th Avenue, or breaking down on the sixth busiest road in America. Let’s aim for the stars and in doing so, hope to find some answers that please us while we’re here.