A Cat and His Box 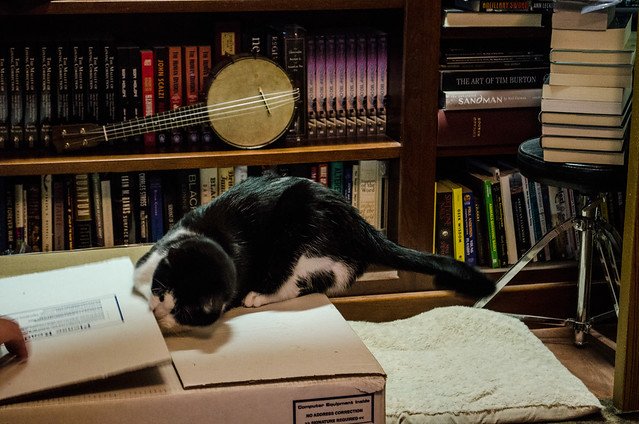 Zeus the cat, shown here being fooled into attacking the underside of a box by the scratching sounds my wife is making, has become quite attached to the self-same box. The box is the one my most recent desktop computer came in; I pulled the computer out of it and the kept the box for a bit just in case something went horribly wrong and I needed to ship the thing back.

As it turns out the computer runs perfectly well, but in the interim Zeus has decided that the box is his spot, i.e., the one place that for him and him alone. If Lopsided Cat dares to sit on it Zeus will thump on him until he moves, and then lie down on it himself as if to reclaim it. It’s kind of adorable, in a cat way.

So although the box now serves no real purpose any more and is in fact a little bit in the way, I think I’ll keep for at least a while longer. It makes Zeus happy and doesn’t hugely inconvenience me, and it’s certainly a cheaper cat seat than many others I might buy (and have). So, enjoy yourself, Zeus. I wouldn’t keep a big pointless box in my office for just anyone, you know.