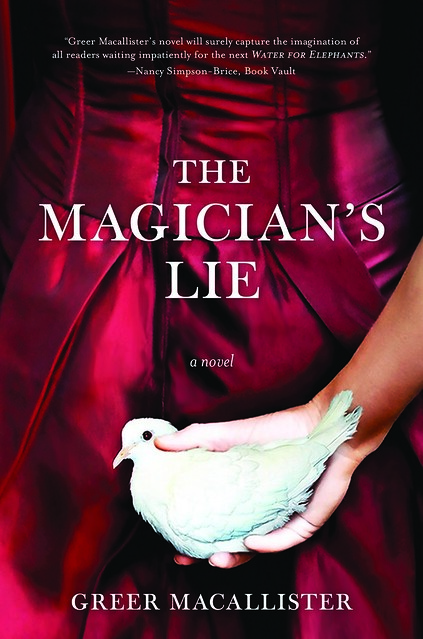 In some ways, writing a novel is a bit of magic — you sweep someone away to another time or place using only the power of words. When Greer Macallister was writing The Magicians Lie, about an actual, professional magician, there was another level of magic to consider — as well as some intriguing practicalities.

I write stuff of all sizes, inspired by ideas of all sizes. Some ideas are the right size for short stories, others for poems, other for plays, and so on.

One day a little over five years ago, I was hit upside the head by the Big Idea that became The Magician’s Lie. I knew from the beginning it was a Big Idea, the right size for a novel. I was inspired, actually, by an absence.

And immediately I realized I wanted to write that book, about that magician.

So The Amazing Arden was born. She would be famous, and infamous, and she would perform an illusion called The Halved Man, and when it seemingly went wrong and a man’s dead body was found under the stage after a performance, she would be suspected of murder.

I knew right away who she would be – but when would she be? I had a choice to make. Would she be a present-day, modern woman, with a Vegas show and a TV special? Or did it make sense to set the story in the past, when stage magic occupied a more central place in the nation’s daily entertainment? After some research, I found I had almost complete freedom. Even today, it’s a rare thing to see a female magician cutting a man in half, and gender politics in the US are, sadly, still retrograde enough that some people would be upset by such a sight. Still, a contemporary setting just didn’t seem right. I found that one of the first famous female magicians performed the world’s most deadly illusion, The Bullet Catch, onstage in New York City in January 1897. I decided to include that real event in my novel to inspire my protagonist.

But I’d never been a historical fiction writer. I didn’t know how to do it. I didn’t know where to find facts, how to select them, and when necessary for the story I wanted to tell, when to ignore them. I got mired in the research, and every time I started a new scene, I’d have to stop writing to go answer basic questions. Would the protagonist, in this particular situation, be wearing a hat? Gloves? How would a person without money get from Baltimore to New York, and how long would it take? Did theaters in the late 1890s and early 1900s have gas lights or electric? What were their precautions against fire? When were sequins invented?

Over the course of five years of writing, I figured out all those things, and more. I discovered I loved writing historical fiction. There’s just something magical about whisking readers away in a compact 320-page time machine. And though I’ve never before spent so long and wept so many tears over writing a novel, I’ve also never been as proud of the ultimate result. My next Big Idea is historical too, and I wonder if all my ideas will fall into that category from here on out. Time, as it does, will tell.

There’s no telling where inspiration will come from, in the end. Any idea might be Big or Small, and you might have thousands or just a handful. Look around you, engage with the world, and let your mind work its magic. You can be inspired by anything you’ve seen – or, as I was, by something you haven’t.