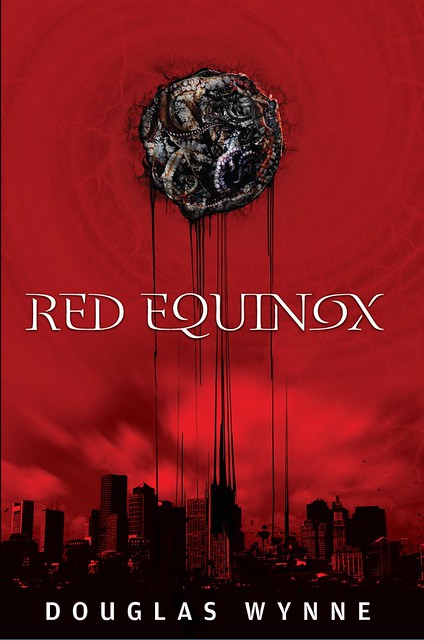 Sometimes a terrible event can inspire authors not just to create fiction but to look at their environs a whole new way. Douglas Wynne explains how an attack on his town brought about his latest novel Red Equinox — and a reevalution of his city.

On April 19, 2013 I sat at the computer riveted to a live streaming Boston police scanner as authorities closed in on the trailered boat in Watertown where Dzhokhar Tsarnaev was holed up. “Watch your mic,” an unidentified officer kept repeating, aware that the world was listening in.

Boston is my adopted city. I moved from NY to “the hub” in the early nineties to attend Berklee College of Music and eventually settled down about an hour north of the city, near my wife’s hometown. I’d spent a good part of the day wondering if the Marathon Bombers were headed north on Route 1 toward our neck of the woods, that part of Massachusetts where H.P. Lovecraft placed his fictional town of Arkham and Miskatonic University.

We’ve become accustomed to the idea that terrorists kill in the name of their gods. They are delusional, of course. Fanatics. But sometime soon after the Marathon Bombings I was struck by the kind of what if that makes a writer explore a horrific scenario simply because the question won’t stop whispering in his ear until he does: What if the hideous acts of a terror cell caused their victims to actually witness their terrible gods walking the earth?

The notion that members of a cult of chaos might live among us, that their nihilistic faith could cost us our lives, is a long-running leitmotif in horror fiction. You can hear strains of it in the eloquent, yet discordant music of H.P. Lovecraft, right on down to that most modern incarnation of the genre—the beating drums of Fox News.

I wanted to bridge the gap between Lovecraft’s xenophobia and the real post 9/11 fears we have to live with now, no matter how liberal our worldview may be. So I invented a modern incarnation of Lovecraft’s Church of Starry Wisdom, an urban religious minority living in flood-ravaged Boston. These aren’t the gibbering inbred hicks of HPL’s forgotten shanty towns. They attend MIT and use 3D printer technology to bring ancient abominations to life. They have a coherent philosophy akin to that of eco terrorists, believing that man’s greatest achievement was raising the sea level high enough to turn coastal cities into a suitable habitat for their dark marine deities, and having accomplished that, he should be eradicated before he destroys the planet.

I got hooked on Lovecraft when as a teenaged Stephen King devotee I started branching out and picked up a cheap paperback of The Lurking Fear and Other Stories with a fantastically lurid cover. I still have it. There’s something about the cosmology and the gorgeous dread that gets under your skin. When I sat down to write Red Equinox, I wanted to pay homage to that influence, but I also wanted to tell a character-driven story because that was what got me hooked on King in the first place and opened the door to the more abstract horrors of Lovecraft, Poe, and Machen.

I started with two lists: the Lovecraftian tropes I wanted to include, and a longer list of the ones I wanted to defy. I could tell right away it was either going to be a train wreck or a hell of a ride, but in any case I was going to write a book I wished I could buy: a cinematic Cthulhu Mythos thriller with character as the engine.

That meant writing about people I find interesting, people I could care about. It meant a cast you won’t find in traditional weird fiction: a female lead with Seasonal Affective Disorder who discovers monsters lurking at the edges of her infrared photography, a homeless African American occultist who wears a Burger King crown and 3D glasses, an immigrant Brazilian street artist, and an Irish American covert agent with a gambling habit. These are my heroes. In short, a ragged band of freaks that waspy old Howard Phillips would have shunned. I even named the hurricane that floods Boston after Lovecraft’s wife and gave my heroine a dog for a sidekick because HPL was a cat person.

Maybe it’s a passive aggressive love letter to Lovecraft. I wanted to thank him for the cosmic dread but not the racism. And I wanted to see if that cosmic dread could coexist with the headlong momentum of an urban thriller.

In the process I fell in love with my adopted city all over again.

The story is set in an alternate Boston, a city on a slightly different historical track from the real one. The angles are a little askew. It’s a place where the words BOSTON STRONG never made it onto T-shirts and bumper stickers because the Marathon Bombings didn’t happen, but the Church of Starry Wisdom did.

Researching the book brought me back to my old stomping grounds more often than I’d been since college and introduced me to some of the city’s weirdest features: the odd acoustics of the Christian Science Center’s Mapparium, the “Halfway to Hell” graffiti that has been repainted on the Harvard Bridge for half a century, the “non-Euclidian” geometry of the Stata Center at MIT, and the cabalistic secrets encoded in monuments built by Freemasons.

There were false starts (I trashed and rewrote the first chapter in the second draft) and backtracks (realizing I still needed a character I’d killed), but the city itself often presented solutions to the twists and turns my plot had taken without a map. At times, the journey felt strange and synchronistic, like I was on the scent of something. After all, my father-in-law is a Freemason named Howard, who lives on Phillips Ave up here in Lovecraft Country. And at the end of the journey, the Big Idea sparked by an act of terrorism turned out to be a myth about light shining against the darkness in the heart of the city I love.