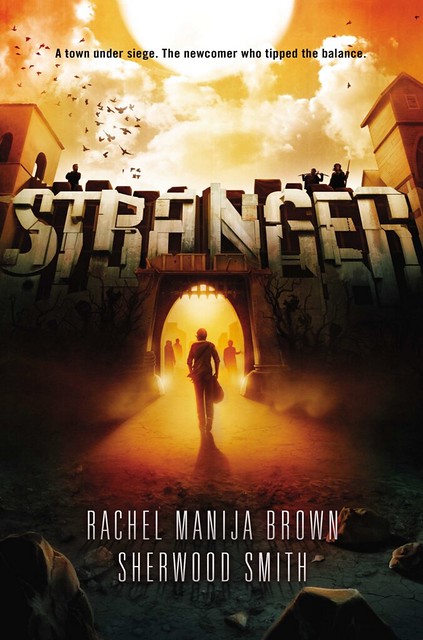 Sometimes a book’s big idea is a risky one. And sometimes writing a book and getting it to publication involves one risky idea after another. Rachel Manija Brown and Sherwood Smith’s new novel Stranger has risky ideas in it from start to finish — and beyond. They’re here to assess their risks for you.

We knew it was risky when we started.

The heart of science fiction is the tension between the familiar and the different, between new ideas and much-loved themes. Our post-apocalyptic YA novel, Stranger, features our favorite tropes— mutant powers, colorful alien wildlife, building a new civilization from scratch, man-eating plants, desperate treks through the desert, swordfights, attacks by mutant creatures, towns under siege— but in an unusual context.

Young prospector Ross Juarez comes stumbling through the desert, wounded and delirious, and is rescued by the citizens of Las Anclas, a frontier town whose walls are guarded by armed townspeople and carnivorous roses. He brings with him a hidden treasure, a power no one has ever had before, and a whole lot of trouble.

Our risky idea was to base the characters of our post-apocalyptic town on the people of modern Los Angeles. Its real teenagers aren’t the straight white culture-less heroes who inhabit most YA novels. They belong to many races and cultures and religions. Some are gay or lesbian or bisexual. Some are disabled. And few of them ever see people like themselves as the heroes of sf novels.

We knew it was a risk to write a YA novel with protagonists who didn’t fit the mainstream publishing mold. Sure enough, Stranger got caught up in a controversy before it even sold, when an agent offered to represent it on the condition that we make one of the protagonists straight or else remove his romance and all references to his sexual orientation.

We refused. Then we put out a call to other writers to see how common it was to be told to change the identity of their characters. We heard many similar stories from writers who were asked to make gay characters straight or to make characters of color white; you can read them in the comments to this article.

To this day, it is a risk to write protagonists who belong to current minority groups. (It is even more difficult to be a writer who belongs to one or more of those groups.) We were lucky to find a publisher and editor willing to take a chance on our book: Sharyn November at Viking.

But the identity of our protagonists wasn’t our only risk. Most recent YA set in the future is dystopian, and explores our worst fears of what our world might become. In these books, love is outlawed, children are forced to murder each other on television, Big Brother watches everything, and hope is at best a wistful notion and at worst a cruel joke.

We took a chance on a more optimistic future. We chose a post-apocalyptic setting not to explore how grim and cannibalistic life can get, but as an opportunity to create a new landscape here on Earth, full of danger but also full of wonder.

Our creatures and plants came from the Rule of Cool: we first invented whatever we thought would be fun, then created an ecosystem that could encompass them all.  Wouldn’t it be awesome if squirrels could teleport sandwiches out of people’s hand? Absolutely! And if they exist, probably other creatures have psychic powers too. Bring on the mind-controlling giant lobsters and illusion-casting rabbits!

Wish-fulfillment is often used as a dirty word. But we took a chance on a world where some prejudices have died out, so two gay teenagers could have relationship angst that has nothing to do with homophobia, and an African-American girl who joins the town’s elite military Rangers wonders if she’s their token… telekinetic.

We enjoy such wish-fulfillment for ourselves; books about the difficulties of being a real-life minority are important and necessary, but they shouldn’t be the only books out there. Sherwood’s wish-fulfillment was a world where old women are respected rather than dismissed and menopause can bring badass powers. Rachel’s wish-fulfillment was a world where the Jews fight invaders and monsters rather than anti-Semitism. And we both enjoyed the chance to create a society without gender stereotypes or sexism, where the sheriff is a woman whose Change gave her super-strength and a skull face, and the male protagonist is the one who gets a makeover.

It’s not a perfect world, even apart from the deadly crystal trees, the chance that a mutation will kill you rather than giving you cool powers, and the nearby tyrant looking to expand his empire. Rachel is a PTSD therapist, and Sherwood has spent a lifetime observing the effects of trauma in the classroom and out of it. We used our experience to make the aftereffects of trauma and battle realistic. PTSD isn’t something you can shrug off, power through, or cure with love. But neither is it something that will destroy your life forever.

Our book is fiction, but we don’t want it to convey messages we don’t believe in.  We created a hopeful future because we believe in hope. Nowadays, that may be our most radical idea.

Life imitates art. Our book started with a risky idea and was bought by an editor willing to take a chance on it. Now it’s embarking on yet another risky journey. We decided to self-publish the rest of the books in the series. Sherwood explains our reasons in full in this post.

In short, staying with Viking would mean a minimum of two years between the release of Stranger and its sequel, Hostage, with the likelihood of a similar gap between all subsequent books. We decided to prioritize releasing the books in a more timely fashion and being able to control their price, over keeping the prestige and resources of a traditional publisher. So Stranger is published by Viking, and Hostage is published by the writer’s collective Book View Café.

This risky strategy seems fitting for a series that, from the beginning, has been all about taking chances.