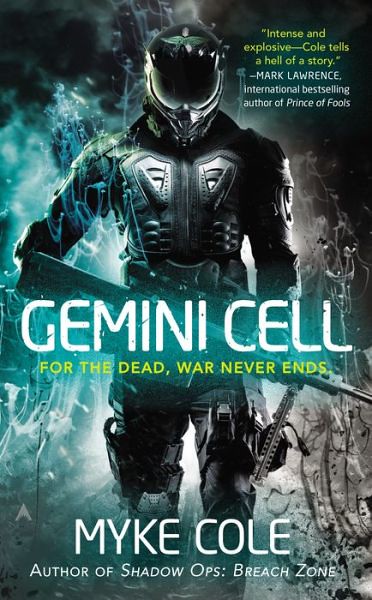 War changes you, and in the case of the protagonist of Gemini Cell, the new novel by Myke Cole, the changes are more drastic than they are for others. But as drastic as they are, they have their root in a common affliction for those who have gone into combat. Cole explains below.

When you sign up for a hitch in the military, you understand that you might get hurt. Warfighters exist to kill people and destroy property, that’s what they do. You’re ready for privation, for injury.

But it’s one thing to suffer. It’s another thing to change.

You tell yourself that won’t happen. Sure, you may experience horror, but you know who you are. After months in the suck, you take pride in maintaining your sense of self. War is hell, but you haven’t let it make you into a demon.

Then you come home, and something’s off.

It’s in the little ripples you make in the world, the complex web of interactions that extends from the store clerk who bags your groceries to your own spouse and children. You’ve had this experience, and even though you lived through it, it broke something lose inside you, something that can never be put back. The isolation grows and you realize with dawning horror that you have changed in a way that those who’ve never gone to war haven’t, that the change is permanent, that it separates you from everyone else, even those you love the most, forever.

This chasm, this permanent isolation is what we call PTSD, and it’s the big idea behind Gemini Cell.

Warfighters don’t have a monopoly on PTSD. It affects everyone who experiences trauma, from victims of abuse to those raised in poverty, but Gemini Cell is a book about a warfighter, and it’s that brand of PTSD I’m focusing on here.

The protagonist, James Schweitzer, is killed on an op. The story would normally end there, but Schweitzer is summoned back from the dead and put back on the line serving his country. Death has given Schweitzer a lot of advantages: near-immortality, super strength and speed, heightened senses, but it’s also permanently cut him off from the people he once loved and lived alongside. Schweitzer is still a man in every sense save one: he lacks a beating heart.

Schweitzer left a wife and son behind, and his efforts to reunite with them throw his permanent change into stark relief. The dead can be reanimated, but they can’t be brought back to life. Schweitzer may be able to rejoin his family, but he can never be a husband and father again, not like he was.

Schweitzer’s unlife is a pretty bald stand-in for life with PTSD, the permanent shift that sets you apart from those you love. The challenge of first accepting the change, then charting a new course, a way forward now that the goal posts have all moved, is enormous. For many, it’s insurmountable. It is as if, dead, you walk among the living, who must force a smile and pretend that nothing is wrong.

Many return from war superpowered, able to complete challenging tasks under immense pressure. They are stronger and fitter, undaunted by the fear of death that they have faced so many times. They are disciplined and focused. They get up early. They notice things others might have missed. But these benefits only serve to set them further apart. The loved ones they left behind still want to sleep in, still want to spend their Saturday nights at the loud rock concerts with drumrolls that sound far too much like gunfire.

Those returning from war find themselves swimming upstream, having to navigate job markets that have no use for those whose primary occupation is killing people and destroying property. They are forced to grapple with a world that suddenly has too many choices, a world that looks and smells and sounds familiar, but no longer makes any sense.

It may seem as impossible as a dead man rejoining the living, but military service members do impossible things all the time. The skills that set the warfighter apart in the first place are the same skills they must leverage to cope with being set apart. You can never return life to how it was, but a new life can be built, and it may not be until many years down the road that you realize that it is better than the one you left behind.

Raised from the dead, Schweitzer has plenty of work to do. He must serve on his nation’s front line against a resurgence of magic that threatens to bring destruction to all. But his toughest challenge is in finding a way to exist in a world where he shouldn’t, where his every step is a violation of natural law.

It won’t be easy, but it’s not surprising. This is war, and war is hell.

I met John Anderson close to nineteen years ago, when I started working at America Online, back in the day when the company was the very cutting edge of social media. I had moved across the entire country for the job, my wife had to stay back in California for a couple of months to finish up a semester of school, and I was literally at loose ends, lost, with no friends and very little idea of what to do with myself. John Anderson was part of a close circle of friends who took me in for trips to the Vienna Pub, late night games of Marathon, arguments about science fiction books and films, and more house parties than I can sensibly remember. When Krissy joined me in Virginia, I think she was glad I had fallen in with this particular crowd. Years later I would dedicate a book to these friends, John among them, in commemoration of their drawing me in and and being friends to me.

John held a special place in the group — the pop culture guru, especially when it came to music. His love for the stuff was simply immense, particularly when it came to Americana, that strain of muscular rock of which Bruce Springsteen was the patron saint (and boy, did John ever love his Bruce). Through him I was introduced to dozens of musical acts, many of whom I still listen to today, and many of whom became friends with John after the fandom wore off (I’m thinking particularly of Matthew Ryan here, though there were others).

What was great about John was that he wasn’t a snob about music when he talked to you about it. He wanted to share the stuff, and he wanted to share it with you, and he was genuinely pleased when you liked what he liked. He was the sort of appreciative, loving and intelligent fan any musician wished they could have.

He was also the sort of friend anyone would wish they could have. He was kind and smart, could talk trash while playing foosball or have a long conversation until the sun came up. He excelled in joy — through music, through reading, through friends and through living, and most of all with through his marriage with Amanda, his wife of nearly a decade.

Some years ago John was diagnosed with ALS, and he shared that news with his friends. The ALS took a physical toll but as far as I can see John continued to excel in joy. He was reading, listening to music and enjoying the company of friends right until the end.

That end, which came yesterday, is not, I suggest, the end of that joy in which John excelled. Those of us who had the joy of knowing him, and of sharing in that joy, will feel it whenever we listen to the music he introduced us to, or the books we read with him, or remember the conversations we had or are in the presence of those who knew him and were known by him.

My heart breaks that John is gone, and for Amanda, and all our friends. But how happy I am we each got our time with him, and shared songs and words and days and nights. I will miss my friend, but I will not miss his friendship. That remains and will remain for as long as I do, or any one of us will.

Thanks, John, for the music, and the company, and for you. Peace be with you, and to everyone who loved you and called you their friend.

John was a guest blogger here a few years back. If you would like to read his post — which make clear his love of music and pop culture — here they are.