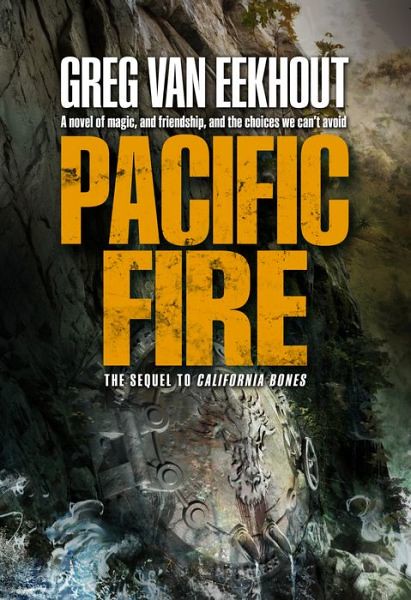 Look! Greg Van Eekhout is going to quote a famous person at you! For reasons! Oh, and also tell you about Pacific Fire, the follow-up to California Bones, which I liked quite a bit (I blurbed it, you might recall). And don’t worry, that famous person quote has a point.

John Milton writes, “The child shows the man as morning shows the day.” Indeed, one presumes the child shows the adult of any gender. And here I am, kicking off a Big Idea post about a book that features cannibalism and dragons with a Milton quote, not because I’m trying to fool you into thinking I’m classy like that, but because the relationship between the children we were and the adults we become is one of the central themes of Pacific Fire.

I should probably backtrack a bit and put the Pacific Fire in context. It’s the second book of the trilogy that began with California Bones and will conclude later this year with Dragon Coast. These books are about wizards who get their powers from consuming the remains of magical creatures. Eat dragon bones and you get some of the abilities of a dragon. Eat a wizard who’s eaten dragon bones and you get the wizard’s abilities. The world is an alternate California ruled by the most successfully voracious wizards, or osteomancers, and our protagonists are people both magic-using and not who get caught up in the osteomancers’ power struggles.

In California Bones, Daniel Blackland is the son of a wizard and a spy. When his father is killed for the magic contained in his bones and his mother returns to her native Northern California, Daniel is essentially orphaned. He grows up in hiding, trying to avoid his father’s fate while being used by his crime lord guardian for his magical skills. Ten years later, in Pacific Fire, Daniel finds himself trying to father and protect Sam, the osteomantic sort-of clone of the chief wizard of the Southern Californian kingdom and the man who, all those years ago, killed and ate Daniel’s father. In trying to save Sam, Daniel’s also trying to save the exploited and abandoned boy he was himself. But when the powers in charge come after Sam to fuel the patchwork dragon super-weapon they’re building, Daniel sees history repeating itself.

And that’s where the Milton quote comes in. Amid the fisticuffs and magical and spider assassins, rock monsters, a narco sub built from the ribcage of a sea serpent, a water mage, a scary chef, and the aforementioned Pacific firedrake, is Daniel’s struggle is to prevent his own childhood from repeating itself in Sam. And there’s Sam’s struggle to become the man he wants to be while knowing he started life as an artificial creation, a treasure to be plundered.

What Milton states poetically boils down to this: adulthood is the consequence of childhood. Osteomancy is the practice of gaining magic by consuming the remains of the past. Our today is built from the stuff of our yesterday. And in their own ways, Daniel and Sam are fighting to craft their own tomorrows.

← Midnight Rises, My Graphic Novel, Out NOW on iOS!
Farewell From Florida →