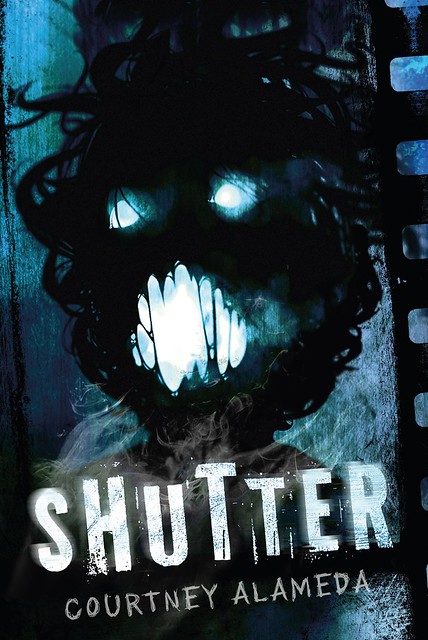 First off: Whoa, that cover. It’s awesome. And the cover tells some of the idea of Shutter, by Courtney Alameda. She’s here now to explain what, and why, and how in the end a story may be worth a thousand pictures.

When people ask me about the idea behind Shutter, I point to the novel’s protagonist, Micheline Helsing. I met this pint-sized exorcist/photographer in a dark, dilapidated house, frozen on a stairway. She held a Nikon camera as one would a handgun, its long telephoto lens pointed at the ground, her attention trained on the landing, sweat plastering her blunt bangs to her forehead. Together, we listened to the footsteps—slow, wooden creaks—coming down the hall on the second floor. The violet light her ghostly quarry emitted grew stronger, brighter, and more brutal with each step.

I thought: There’s someone I haven’t seen in YA before.

Micheline’s ability to capture a ghost on analog film is nothing novel: It’s been done in film and video games. The belief is found in several religions across the globe, and is a mainstay concept on popular ghost hunting shows. The older I get, the more I realize most ideas aren’t new or individual in and of themselves, really. To misappropriate John Donne a little, no creator is an island entire of herself. The things we read, watch, and consume all have an impact on our subconscious mind. It’s up to us to determine how significant that impact becomes in our work.

So the game was afoot: I had to devise a fantasy construct for either Micheline or her camera, one I hadn’t come across in my reading, viewing, or gaming experiences. I started with the ultraviolet ghost and worked backward in my research, discovering first that there are species of birds and insects capable of perceiving ultraviolet light. Later, I found that some human women are born with an additional color cone in their retinas, allowing them to perceive millions of variations in color the average eye cannot discern.

I’d found my construct: These women are called tetrachromats, and one percent of women would have the ability to see this broader range of color.

The tetrachromats in Shutter see the auras of the undead in a color spectrum: The slower, longer wavelengths of light—reds and oranges—represent the lowliest creatures, shuffling zombies and the like. The bestiary moves through the entire spectrum, representing a vast number of undead creatures unique to Micheline’s world. The ghosts, of course, are made of nothing more than violet energy and light, the shortest and fastest wavelengths visible to the human eye.

I brought in the Van Helsing legacy on Micheline’s insistence. She’s a stubborn sort of girl, a lesson I would learn again and again over the course of writing the novel. But the Helsing connection gave Micheline a legacy to shoulder, as well as an illustrious, rich history that I mined for both Micheline’s character the three boys who are her dearest friends and hunting companions. But like the camera, I realized that I wasn’t the first to reimagine the Van Helsings in a modern age—in fact, aside from Sherlock Holmes, Dracula has been portrayed in film more times than any other figure from classic literature. There are books, video games, and even Japanese manga in which Van Helsing or his descendants figure prominently.

I differentiated my Helsing Corps by making them an integral part of everyday life in Micheline’s world, a sort of police force for the supernatural or undead. My father was a police officer in the San Francisco Bay Area, and so my childhood was saturated by police stories, thrilling ride-alongs, and a basic knowledge of police procedure. With that model in mind, it became easy to imagine Helsing “reapers” responding to emergency calls and patrolling the streets at night, keeping their neighborhoods safe from the undead threats lurking in the city’s abandoned places.

Better yet, the Van Helsing legacy allowed me to connect a YA novel to a piece of classic literature—and my greatest hope is that my work might inspire a young person or two to seek out the source material. Shutter is not a re-telling of Dracula, but much of Stoker’s work provides the underpinnings for my own: The unbreakable friendships between Micheline, Ryder, Oliver, and Jude are meant to mimic the ones shared by Van Helsing’s own hunting party. Crosses still have power in Micheline’s world, and she shares her religious beliefs with her famous forebear. The otherworldly vengeance that provides the basis of the plot has much to do with the events of Dracula, but saying much more than that would spoil the novel.

As I move forward in my work, I specifically look for projects that follow this model; things I can tie back to my literary godparents, both classic and contemporary. I particularly like taking tired tropes and twisting them until they remember how to breathe, or until they get so bent out of shape, they look like something readers haven’t seen before.

But most of all, I wait to see someone like the girl on the stairway with a story to tell.

← How I Spent My JoCo Cruise 2015
The Big Idea: Rebecca Adams Wright →