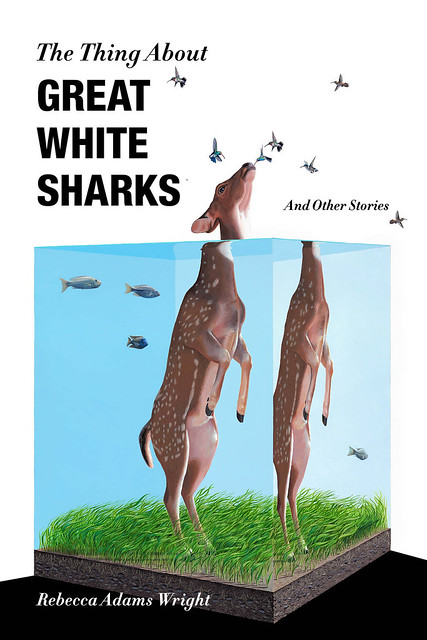 Rebecca Adams Wright was one of my students at the Clarion Writer’s Workshop. I’m delighted beyond words to spotlight her first, terrific, collection, The Thing About Great White Sharks, here on the Big Idea. As she explains, the title may say “sharks” but what it all really comes down to is people.

My stories begin with people. People from all walks of life, people in unlikely circumstances, people that I can’t get out of my head. An old man, stroking the head of his robotic dog.  A young girl, befriending a man made of glass. A husband, obsessed with the furnace his wife maintains on their claustrophobic space station.

My great delight in the sculpting of character means that when I was first working on the stories that would later make up my collection, The Thing About Great White Sharks, I didn’t intentionally set out to tackle any ideas of Great Meaning. Mostly, I set out to write about people who were confronting ghosts, odd golems, alien invasions, hordes of murderous bees, flying circuses, and talking gardens. All of these situations were all interesting to me. I cared intensely about my protagonists but I didn’t yet grasp what their stories had in common. My characters came from so many different backgrounds, were evenly split between men and women, ranged in age from twelve to their seventies, lived on different planets and existed in different eras (sometimes millennia apart).

Basically, I wasn’t sure my little band of narrators was united by any Big Idea. But hey, they were all living inside their own self-sustaining story pods, so what did it matter? They had rations in there. They had oxygen. They were fine trundling along their small orbits alone.

Then a few of the stories got picked up by magazines, and a few others won awards, and I started to think about putting them together in a collection.

Now, to me, the best story collections are often—I’m going to date myself here—like great mix tapes. The mix tapes your closest, coolest friend made for you in high school.  The voices on the tracks may be wildly disparate, some of the songs may scream in thrash metal and others may whisper to you in velvety jazz, but that juxtaposition is part of the appeal. Placed so improbably back to back, well-selected songs speak to you in ways you don’t expect. All of a sudden you’re looking at your own complicated jumble of perceptions from a new perspective.

I wanted my collection to work like that ideal mix tape. I gathered my stories together and panicked. I despaired. I stacked and shuffled, trying to find a way to make all the seemingly disparate narratives fit together in such a way that the sum total would take on Lofty Overtones. Finally, I realized that the only way to make any progress toward a book was to stop trying to paint apples to look like oranges. I decided I would simply do my best to polish each individual story and damn any thematic union between them.

It was only then, as I released desperation and re-immersed myself in the individual narratives, that I began to see the Big Idea peeking out of all of them. The unifying factor was coming out of character, of course. How had I missed the pattern?

The grieving couple in “Tiger Bright,” who inherit a big cat and devote themselves to the animal’s care.

Ed, the Korean War veteran and traveling salesman in “Storybag,” who quickly becomes protective of the very strange item that appears in his magical sample case.

The artist in “The White Chalk Road,” who manufactures an entire world in an effort to make it home to one fiercely-loved old dog.

My protagonists have a tendency to be isolated—by war, by work, by sickness, by life on alien planets, by their own neuroses. But over and over again, these characters were trying to climb out of isolation, to make contact. Sometimes they could only manage a small wave from a long distance. Sometimes they stood screaming directly into each other’s ears. Sometimes they missed the potential for communication entirely and went sailing out into some weird stratosphere, raving. But the point is that they were all battling to communicate, to build connections, to form relationships.

The idea that humanity is defined by our need to connect to one another, that we all, every one of us, require at least one meaningful relationship to hold us together.  That’s the Big Idea and the unifying theme running throughout the stories in The Thing About Great White Sharks.

There are a lot of other ideas here, too—about animals, and what they mean to us, and how both strange and familiar they are.  About violence. About humor and wonder, and how we should never stop looking for either one. But the very human need to make contact—that’s what drives all the rest forward.

This book about ghosts and golems and aliens and robots and bats and sharks is really about people.

I should have known.