First, look at that: Lock In is finalist for an Audie, in the Science Fiction category. Sweet! The graphic here notes Wil Wheaton as the reader (plus a full cast for “Unlocked,” which was included in the Lock In audio package), but the finalist notation in the “all finalists” press release (pdf link) also includes Amber Benson, as it should, because she turned in a terrific version of the novel. I don’t know why she didn’t make the display graphic but obviously I wanted to make sure I noted her, and her contribution. If the book wins the Audie, a big chunk of that award will belong to her. Congratulations to her, to Wil, and to all the other authors and narrators in this and other categories. Awards are fun.

With that said, four quick notes regarding awards:

1. If you’re a SFWA member, the deadline to nominate for the Nebula Awards is this Sunday, February 15th. Get to it, folks. Your former president thanks you for your cooperation.

2. A reminder that Hugo nominating is open for about another month, so while you have some time on those, if you’re planning to nominate, it’s a good time to start thinking of your nomination lists for categories.

3. On that note, tomorrow I’ll put up my post for people to list the works/people they think merit award consideration this year. Which will hopefully give you some excellent things to read while you think about who and what you want to nominate.

4. I’ve been asked off and on if I have any thoughts about the various dramas surrounding science fiction and fantasy award nominations this year. Aside from the occasional Twitter snark, no, not really, except that it’s tiring and mostly pretty silly and I’m not sure why I would want to think about any of it very much. I know what I plan to nominate this year, and I’m nominating because I think the work is (and/or the people behind the work are) worth the artistic consideration. If you’re nominating this year, I suggest you do the same.

Aaaaaand that’s pretty much it.

The folks at the Audie Awards asked me if I would be willing to announce the finalists for the Fantasy category of awards, and of course I was delighted to. The Audie Award, for those of you not aware, are the awards given out for excellence in audiobook achievement. This year, the finalists in the category of Fantasy are: 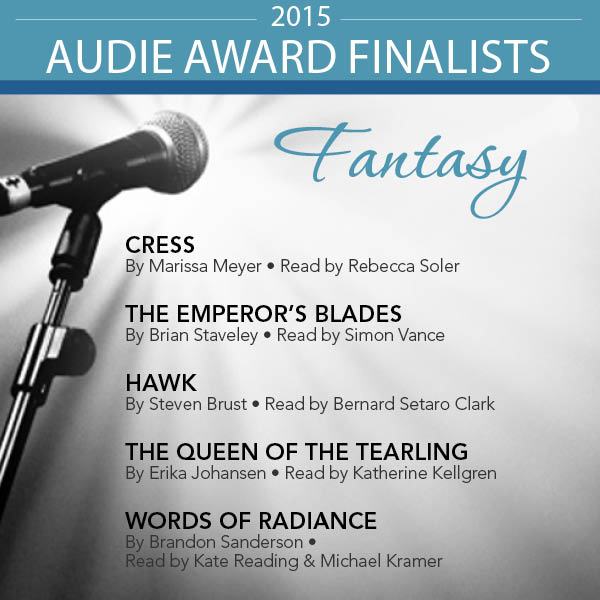 If for some reason you’re having difficulty seeing the image, the finalists are:

The Emperor’s Blades; by Brian Staveley; Narrated by Simon Vance;

The Queen of the Tearling; by Erika Johansen; Narrated by Katherine Kellgren;

Words of Radiance; by Brandon Sanderson; Narrated by Kate Reading and Michael Kramer.

The Audie Awards will be given out May 28. Congratulations to all the finalists in Fantasy category, whom I have had the honor to announce, and to all finalist in every other category as well! 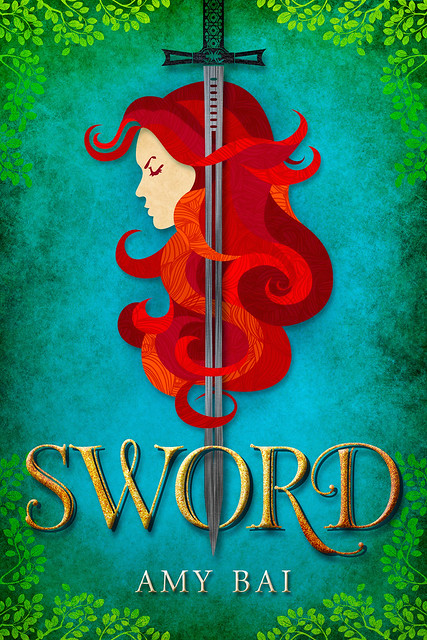 Who will your heroes be? How and why are they as they are? Amy Bai gave serious thought to these questions when writing Sword, and found the answers for her through a most circuitous path.

I grew up, as so many of us did, on Hans Christian Andersen, the Grimm brothers, Charles Perrault, and Disney; on destiny and good girls with shining hair, golden boys on tall horses bending over them to save them with kisses; on the wickedness of evil stepmothers and the last wishes of dying kings. I believed in the power of enchanted swords, wise old mentors, fate, and the deadly secrets of the spinning wheel. I never doubted that the serving girl was disguised royalty and that someday her prince would come. I knew that gentleness and kindness won you the help of the furry woodland creatures, that beauty was worth more than confidence, and that if you waited patiently and were good, if you suffered with grace, you would be swept out of an ordinary life into jeweled-encrusted slippers and true love.

As I got older, I found myself princes more well-rounded than Gallant and Charming—Will Stanton, Cefwyn Marhanen, Rand al’Thor, Frodo and Aragorn, Bastian and Atreyu, King Arthur and Lancelot. They saved the kingdom, defeated the big evil, and changed the world: they lived large.

I was twelve when I discovered Robin McKinley’s The Hero and the Crown, and my world opened up. There was destiny and magic, dragons and world-ending threats, and hey presto! there was also a girl protagonist who wasn’t passive, graceful, decorative, or a damsel. Aerin-Sol’s power had nothing to do with beauty, and she neither waited for nor expected a rescue. She worked for what she wanted. This is much, much more of a thing now than it was then, thank frak, but for an early-90s tween living in an isolated rural town in Maine with a teensy library, it was a Big Deal of the mindblowing variety. I still reread The Hero and the Crown pretty often, because I am obsessive that way, and damn if I don’t get that same little thrill of vicarious power every time. Girl fighter. Girl ruler. Girl hero.

So all things considered, it shouldn’t have been a surprise that when I finally mustered the courage to try writing novels, this kind of story was what came out.

By that time I was a veteran of the sort of undergraduate writing workshops where you begin by talking about theme, then move on to some more theme, and bring it home with a really deep discussion about theme… and along with a diploma and a lifelong partner, I’d emerged from college with a vague sense of shame for my love of fairy tales and SF/F. When I started Sword, I had a handful of ideas and absolutely no clue what I was doing. (I’d love to say this process has undergone a vast metamorphosis since, but alas, several hundred thousand words later, I think I’ve just gotten more comfortable with the initial state of confusion.)

In spite of the confusion, I’m glad I didn’t know how to outline a book back then, because I’m almost certain I would have censored myself. I’d have edited out the influence of all those well-loved fairy tales and books, spent the entire first draft trying to recreate everything I’d been taught to value about words up to that point, and the end result would probably have been something along the lines of the world’s worst Great Gatsby fanfic.

Many long nights, the thunderous arrival of the ebook, a vast shift in the publishing industry, and a complete rewrite later, what I arrived at was a coherent story, and also an homage to everything I love to read… but most of all to that amazing moment when I realized that heroism and agency weren’t the sole purview of men.

Gender flipping of genre tropes is hardly a new thing: it’s been done badly, done well, and done better than I could ever hope to do it myself, but one thing I personally don’t think it will be anytime soon is done to death. (If you’re wondering why, just visit VIDA’s site and take a look at the numbers there. Enough said.) So when I decided that Sword required a twisted nursery-rhyme-turned-vague-prophecy and three reluctant and/or outright disgusted heroes, it was natural to me that the Sword of that prophecy who guides the hands of men and commands the army, and the Crown who harbors all their hope and also rules a kingdom should be my two female main characters—while Song, a Bard who has the more traditionally feminine role of easing their sorrow with music, emotional stability, and a lot of snappy one-liners, would be the brother and friend of my two ladies.

Natural, because those were the stories that spoke loudest to me; natural because I could see me in them. And natural because although years and countless improvements in gender equality have passed since I read a book with a girl hero for the first time, it’s still more likely that in the movies I watch and the books I read, I’ll be expected to identify with a sidekick or a love interest, rather than a hero.