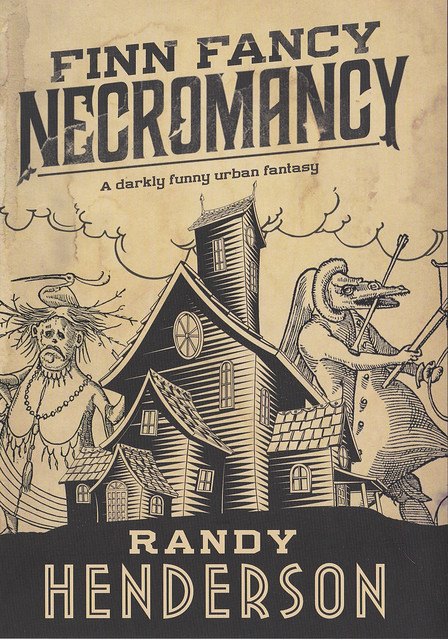 In which author Randy Henderson and the protagonist of his novel Finn Fancy Necromancy have a conversation about things and stuff.

“The Big Idea of Finn Fancy?” Finn asked. “Let’s do it!  Time to get all introspective, Mork from Ork wrap-up style.”

“Hang on.  That’s your standard answer. But let’s get real here, shall we? This is the BIG Idea, so let’s talk about what that really means. I mean, you did turn forty shortly before writing this book.”

“Uh, yeah?” I said, shifting uncomfortably in my chair.

“Well, this book is about a guy who’s banished from our world as a teen in 1986 and comes back in 2011 as a forty-year-old. So first, let me ask, what band’s playing on your computer right now?”

“Uh huh. And what’s the last game you invested serious time into?”

“Well, Shadowrun on my Genesis emulator. But — do you have a point with all this?”

“I’m just establishing some context here. Along those lines, let me ask what made you a fantasy junkie? What do you remember most fondly of those books you read growing up?”

“No. That had humor. Humor was also a big draw for me. Adams and Pratchett, obviously, and the Xanth novels, they were clearly having fun. But I also love the humorous characters in serious fantasies as well. The rogues and the rascals, the imps and the wits.”

“And of course you were a sucker for romance.”

“Well, I was pretty burned out from previous writing projects. I didn’t want to jump right back into months of constructing another epic plot spanning multiple points of view and the fate of nations, I didn’t want more deep research. I just wanted to write.  And have fun.”

“So, I faced a blank page, and wrote a guy narrating in a humorous voice while a magical meteor plummeted at his head.”

“Well, then I had to ask, why? Who was he? What story can I tell from here that will be dramatic and have tension and suspense of course, but above all, one where I can just have fun writing it. So I set it in our world, but made him be an exile from the 80s, added a misfit cast of supporting characters he could interact with, and wrote it in first person with a humorous voice. Basically, I focused on the things that I enjoyed reading in fantasy — magic, humor, and relationships — and the things I enjoy personally. I deliberately set up the conditions of the story in favor of me just having fun with it.”

“And there wasn’t anything deeper?” Finn asked.

Finn sighed. “Like how, in this book, I’m worried about where I fit in, what I really want to do with my life. I’m looking back on the dreams of my youth and pondering my future. I’m questioning what is best in life, and it certainly isn’t to crush my enemies, see them driven before me, and hear the lamentations of their women.”

“Well, yeah,” I replied. “But that’s natural for your character. You’d been absent from our world for twenty-five years.”

“Riiight.  For me, the forty year old child of the eighties. Okay. Fine, then mind if I ask you a question about me now?”

“Why the heck did you write me as a necromancer?”

I blinked. “Uh, well, what’s wrong with being a necromancer?”

“My biggest skill is I can talk to the dead! Woo-friggin-hoo!”

“Hey, you can also rip the souls out of people.”

“No, I can’t. You created me half-trained and nowhere near strong enough, remember?”

“Oh. Sorry. I might be thinking ahead a few books. Still, it gives you room to grow, something to look forward to, right?”

“Uh huh.  Wizards, now they’re awesome. They’re, like, the Swiss army knives of magic users. Lightning, magical shields — Zeke, that ex-enforcer you stuck me with?  He can even pee fire like a flamethrower. Not something I want to watch, but still, if you knew you were going to be throwing sasquatch mercenaries and angry leprechauns at me, a power like that might have come in handy. Just saying.”

“Dude, I’m sorry,” I replied. “I just thought the lone wizard bad-ass was well covered territory. Besides, I decided to make this a story about your family, not just you; and a family of necromancers just worked better.”

“Oh.  Yeah. Thanks so much for that. Were you reading books on torture psychology when you came up with that brilliant idea, Oh Master of My Fate?”

“Um, no,” I said. “I was binge-watching Arrested Development.”

“Lucky me. You couldn’t have given me your family?”

“Nice. Okay, there is one area I do wish you’d made us more alike though. Did you have to make me a virgin?”

“Well, you had been out of your body since you were fifteen,” I said. “And you do know this is going on the internet, right? Anyone can read it.”

“Bat’s breath.” Finn sighed. “I miss the days when everyone just used their Commodores to play Zork and write bad allegorical fantasies with Paperclip.”

“Not everyone did that,” I said. “I think that was mostly just dorks like you.”