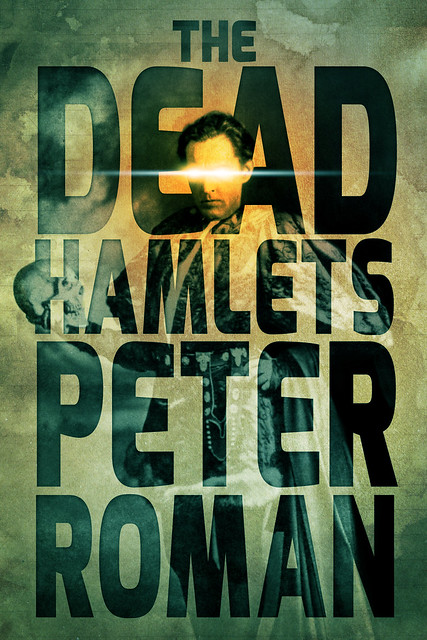 In today’s Big Idea, author Peter Darbyshire casually subverts the Bible, Shakespeare and the reasons why one might choose a pen name, all in the service of his latest novel, The Dead Hamlets.

What if Christ left his body behind on our earthly realm when he went off to the undiscovered country?

And what if some other soul happened to find its way into Christ’s abandoned body and re-animated it?

This was the idea my demented muse burned into my mind with a mad cackle a few years back. When the smoke cleared, I had my Cross series of supernatural thrillers, written under the pen name Peter Roman*.

Cross was inspired in part by an Old English poem I read in university more years ago than I care to remember. I’ve forgotten most of what I learned while getting my English degree — there’s been little need for the politics of iambic pentamer since I fell out of the ivory tower and found myself in the real world, red in tooth and debt. But “The Dream of the Rood” has stuck with me over the decades, thanks to its intriguing perspective on the Crucifixion. It tells Christ’s story through the point of view of the cross that bore Christ.

I started thinking about the poem again one night when I was facing a relative’s death and had to deal with the practicalities of what to do with the body. When loved ones die, we tend to think of them in terms of memories or, if you’re so inclined, souls. We disconnect the dead from their bodies, which are soon to be hidden away somewhere out of sight and forgotten. The body becomes an afterthought to us, simply a carrier for the person, or at least what the person once was.

And then the muse struck, and I thought: what if the Rood from Christ’s story wasn’t a cross of wood but was instead the physical body that bore Christ’s soul during his time on Earth? What happened to that body after Christ left? What if, unlike all the other buried bodies, it didn’t stay forgotten?

And so I came up with the character of Cross, the poor soul who wakes up in Christ’s abandoned body in that cave all those centuries ago, with no idea of who he is or how he got there. He quickly learns that he can harness the supernatural powers of his body, and he discovers that he’s sort of immortal — he gets himself killed with disturbing frequency, but every time he does so the body resurrects with him still inhabiting it.

As it turns out, Cross is no saint. The first book in the series, The Mona Lisa Sacrifice, opens with Cross hunting down and killing an angel for its heavenly grace, which is the power his body needs to perform its magical tricks. That particular misadventure leads him unwittingly into the middle of a war between the seraphim, who are divided about what to do with themselves ever since God abandoned the lot of them on the mortal realm. Cross also has to deal with a colourful and dangerous cast of characters, including a vengeful faerie queen he once wronged, the real Alice from the Alice in Wonderland books, a curious gorgon — and Judas, who was not a misguided human but in fact an ancient trickster god.

I can’t say too much else about The Mona Lisa Sacrifice because, well, spoilers. At the end of the book, though, I was left with an unfinished relationship between Cross and the faerie queen. I began thinking about where to go with the series next, and lo and behold, I remembered another ancient text I’d studied in university: Hamlet.

Actually, I thought of A Midsummer Night’s Dream first, as the faerie feature prominently in that play, and their sense of mischief in Shakespeare’s text largely informed the way I wrote them in The Mona Lisa Sacrifice. But I quickly moved on to Hamlet because of its preoccupation with mortality and death — something that Cross grapples with on a regular basis. I started flipping through my battered university copy of Hamlet until I read the line “Enter Ghost,” and suddenly I had the idea for my next book.

The Dead Hamlets features a mysterious and deadly spirit haunting the faerie court, and it is somehow tied to the Shakespearian play Hamlet. Cross is the only one who has the ability to stop it, thanks to his own peculiar nature. But he quickly discovers that everything is not what it seems to be with the spirit, and that Shakespeare himself hid a terrible and deadly secret about his greatest play.

Some familiar characters from The Mona Lisa Sacrifice return in The Dead Hamlets — the faerie queen and her court, the eerie Alice, the mysterious and horrifying Royal Family — but the book also introduces some new players, including the eccentric Scholar, the undead playwright and demon hunter Christopher Marlowe, and a very supernatural and very dangerous Shakespeare.

If you like the first two Cross books, the third instalment in the series, The Apocalypse Ark, is due out in the fall of 2015 and I’m starting to outline the fourth book. Cross is a character that won’t die. Just like that Old English poem I read all those years ago.

*Why the pen name Peter Roman? The official story is I use the pen name to distinguish my genre books from my other novels, written under my real name, Peter Darbyshire. It’s a case of branding my different author streams. The true story is that “Roman” is shorter than “Darbyshire,” so I get to see my name in bigger type on the cover.