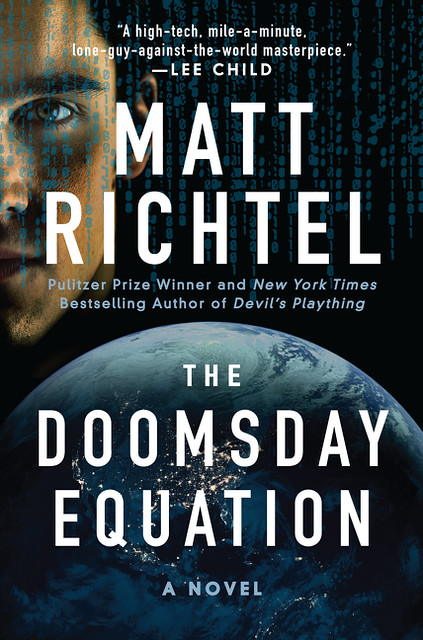 In his guise as a reporter for the New York Times, Matt Richtel won a Pultizer Prize writing on the intersection of technology and the fallible humans who use it. In fiction, and in his new novel The Doomsday Equation, Richtel does the same… but this time the results may be apocalyptic.

Thank you for clicking on this. In doing so, you’ve done your little part to help predict the next world war.

Yes, you (I do mean you, clacking away on the keyboard) are part of a remarkable development, one that is not nearly so farfetched as it may sound. It’s the newfound capacity of computers to help predict – and shape – human events. Including war.

The premise stands at the heart of The Doomsday Equation, near-term science fiction that lives just on the other side of real, and borrows from the exploits of a real person. His name is Sean Gourley. A Silicon Valley darling, fairly called a wunderkind, he created an algorithm to help predict the outbreak of armed conflict and project its length. When will war come and how long will it last?

Do you doubt the concept? As it is, computers use Big Data to make all kinds of predictions, involving weather, stock markets, retail supply and demand. The more information you put into a computer, the more scenarios it can measure, the more it can do what the human brain cannot: see patterns that are the precursors to events. Sean figured out the kinds of patterns that precede a war, “the mathematics of war” he called it in an article in the esteemed journal “Nature.”

The paper proposed an algorithm that its authors called “The Power Law.”

I call it: The Doomsday Equation. In the book, hundreds of inputs – from weather patterns to stock market indices to shifting demographics to our daily surfing Internet patterns – contribute to predicting the stability of the world. Or, rather, impending instability – Armageddon. The implications become staggering (I hope) and, in the end, the world’s fate left in the hands of a protagonist who shares all of Sean’s intellect but none of his grace. The made-up man at the center of The Doomsday Equation is named Jeremy Stillwater. He’s a wonder with computers but he’s terrible with people.

He’s self-righteous, maddeningly so, aggressive and impetuous, driven by conflict himself and, as a result, he’s the last person in the world who should be in a position to prophesize and prevent doom. Over the years, he’s infuriated and alienated all those who had invested and believed in him: his girlfriend, not least, but also the well-heeled investors, academics and even military liaisons who had hoped to use Jeremy’s digital oracle to predict the next terrorist attack.

And so, having isolated himself from the world, there is nowhere for Jeremy to turns when his computer gives him ominous news: global nuclear war, three days and counting.

Is it a joke? A bug? Someone out to settle a score with Jeremy? Or the most important computer message anyone has ever received?

Frantic, skeptical, Jeremy begins a lonely hunt to figure out if his computer is telling him the truth. That’s half the equation, and it is borrowed from real life.

So is the other half of the equation, namely, the conspiracy that has put the world in such a precarious position. I don’t want to give too much away, but what Jeremy discovers is an ancient plot, a network as old as parchment and the Biblical Scrolls, devoted in its own way to keeping the world pure of modernity.

Put another way: the tools that Jeremy must use to save the world are the most modern. But the foe he faces is as ancient and inborn as human nature itself. And their clash gets at the heart of questions we have begun to face: what price modernity? Where it heals does it also betray? Is it salvation or damnation?

With each page of Doomsday Equation, the clock clicks down, heading inexorably to zero, as Jeremy can only save the world by coming face-to-face with the fact that his own craving for interpersonal conflict – his default embrace of self-righteousness – may well be a big part of the reason the world stands on the brink of war. Can computers tell us that war is coming? Can they save us from ourselves? Or will they, by extending the darkest parts of us, merely hasten our demise?