Morning, folks. Hope you’re doing well. I’m on a boat! Here are some more pictures from it to amuse you.

This picture while we were at sea, taken by shooting straight down from my balcony. I suspect this is what Homer met when he was talking about the “wine dark sea.”

The beach at St. Maarten. This where I found out what parts of my body I didn’t manage to get sunscreen on!

Another shot of St. Maarten from the boat. It’s a pretty island.

Life on the boat is lovely so far and we’re all having a fine time. I will of course give you more detail when I’m back on shore. Until then enjoy the photos.

Also, swing back tomorrow — Midnight Star, the video game I worked on, is coming out then, and I’m going to geek out about it here. You won’t want to miss that. 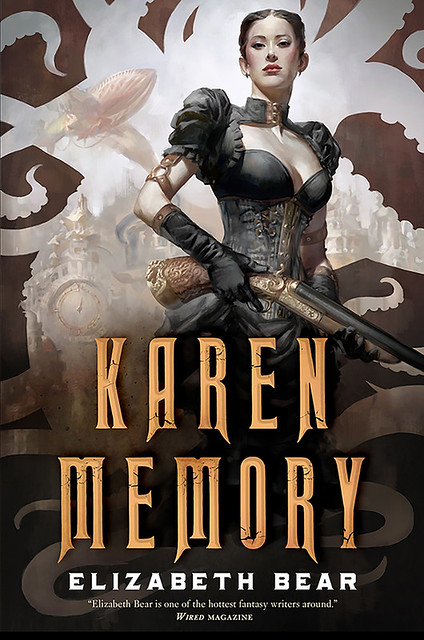 Elizabeth Bear is awesome, Karen Memory has been getting some great notices, and I’m on vacation. Thus, this is one of the shortest Big Idea intros ever. Take it away, eBear!

Where did Karen Memory come from?

Well. That’s a complicated question. It involves a certain well-known young adult editor with glorious hair, a college friend with a memorable name and a good turn of phrase, and a little attitude problem I happen to have with generalizations. And a long, long road between here and there.

In the middle of September in 2009, said editor (with the glorious hair) solicited me for a YA proposal for a steampunk novel with a lesbian protagonist. She solicited me because while in her presence, I happened to mention that I really wanted to write one, which is a nice thing to have happen. So I thunk and thunk until my thinker was sore, and happened to talk it over with an old friend of mine, Karen Memery Bruce, who is a librarian and a puppeteer. In the course of that conversation, Karen Memory’s apparently-already-iconic first line got written—or a version of it, anyway.

According to my blog of September 20th, 2009, the original version of the first line was, “You don’t want to know this, but I’m going to tell you anyway.”

That eventually settled down to the version that is about to see print—that has already seen print, actually, in at least two places, but more on that later. It goes like this now: “You ain’t gonna like what I have to tell you, but I’m gonna tell you anyway.”

And that was it. That was her voice. Everything after that was just letting her have her head and tell her story. (Well, and figuring out how that story went.) And in writing this book, I found a place to vent a lot of my frustrations about how people who are not heterosexual middle- and upper-class white men tend to be erased from existence in certain types of fiction. For example, there’s a historical character in this book, in fact, who is incredibly famous—iconic even—in his fictionalized person, but his real history is so marginalized it’s almost forgotten that there was a historical character upon whom the legend was based.

Needless to say, I named my new protagonist after my friend.

I had a proposal finished within the week.

Well. Okay then. Saddle up, ride on.

Some years went by. I converted the first chapter or so of my proposal into a short story, which was included in the anthology Dead Man’s Hand, edited by John Joseph Adams. And when I next had the opportunity to pitch a book to my long-term and much-beloved editor at Tor, Beth Meacham, I asked my agent to send her Karen. Her comment was, more or less, “Does this have to be a YA?”

It remains pretty YA friendly, for what it’s worth. Or at least as YA friendly as a book about an occasionally foulmouthed, extremely sharp-minded, nearly fearless girl who works in a bordello and faints at the sight of blood can be. It may be the only book ever written with a prostitute as a protagonist with this much adventure and this little sex. It also has rooftop chases, perilous escapes, true love, gunfights, derring-do, a deaf opinionated cat, a bit in a burning building certified authentic by my partner the firefighter, and a mecha battle or two.

If it’s not clear yet, I adore Karen. And I adore the cover art, directed by Irene Gallo and painted by Cynthia Sheppard. It looks just like her. And more than that, I cannot wait to share her with everybody I know. I feel like Karen is a friend of mine—the sort of friend you make, and then can’t wait to invite to parties so all your other friends can enjoy her too.

So what it boils down to is that the Big Idea in Karen Memory is Karen herself—indomitable, smart-mouthed, and proof positive that a woman in a man’s world can still have agency, ideals, and a real badass super-sized serving of attitude.

Well, this is pretty cool: Lock In has gotten an Alex Award from the ALA (and their youth division, YALSA). The Alex is given to ten books each year that are written for adults but have appeal to younger readers.

Here’s the entire list of Alex Award winners for 2015:

“All the Light We Cannot See,” by Anthony Doerr, published by Scribner, a division of Simon & Schuster, Inc.

“Bingo’s Run,” by James A. Levine, published by Spiegel & Grau, an imprint of the Random House Publishing Group, a division of Random House LLC, a Penguin Random House Company.

“Confessions,” by Kanae Minato, translated by Stephen Snyder, published by Mulholland Books, an imprint of Little, Brown and Company, a division of Hachette Book Group, Inc.

“Everything I Never Told You,” by Celeste Ng, published by The Penguin Press, a member of Penguin Group LLC, a Penguin Random House Company.

“The Terrorist’s Son: A Story of Choice,” by Zak Ebrahim with Jeff Giles, published by TED Books, a division of Simon & Schuster, Inc.

“Those Who Wish Me Dead,” by Michael Koryta, published by Little, Brown and Company, a division of Hachette Book Group, Inc.

“Wolf in White Van,” by John Darnielle, published by Farrar, Straus and Giroux.

That’s some good company to be in.

The full press release — which also includes winners of the Newberry, Caldecott and Printz awards, is here (pdf link)

Congratulations to my nine fellow Alex award winners! And thank you ALA and YALSA.

Also, if this day is any indication, clearly I should go on cruises more often. They’re good for my books.

Also, maybe I should write an actual YA book at some point. Hmmmmm.

Yesterday’s sunset first, as it happened somewhere in the Atlantic:

Second, Lock In is one of the American Library Association’s “Best in Genre Fiction” selections for the last year, in the category of science fiction. Their short list in the category:

In the Fantasy category, the short list is thus:

“The Goblin Emperor” by Katerine Addison (Tor) — The winning book in this category;
“Half a King” by Joe Abercrombie (Del Rey)
“Hot Lead, Cold Iron” by Ari Marmell (Titan)
“The Paper Magician” by Charlie N. Holmberg (47 North)
“Queen of the Tearling” by Erika Johansen (HarperCollins)

Also congratulations to Lauren Beukes and Jo Walton, whose books Broken Monsters and My Real Children won in the “Adrenaline” and “Women’s Fiction” categories, respectively.

Lock In also made Locus magazine’s recommended reading list in the category of Science Fiction, which is also pretty damn nifty, if you ask me. The list is longer than the ALA category short list, so let me recommend you follow this link to see the full list as well as the lists in other categories.

That’s not a bad Monday, actually. Thank you, librarians and Locus!

Morning! This post services as a test of my terrible, terrible Internet connection here in the middle of the Atlantic, and as a way to make you jealous of all the fun you’re not having here on the cruise right now. So please to enjoy the following photos.

Yesterday’s sunset as we left Florida.

Jonathan Coulton and band performing “Re: Your Brains”. The crowd, naturally, has turned itself into a pile of shambling zombies. As they would.

This morning out at sea. There looks to be a little rain on the horizon.

The online Internet connection is in fact as terrible as advertised. I tried simply sending these pictures to Flickr and the Internet connection choked on them because the files were too big. In order to get them to you I had to sideload them from my phone to my laptop via bluetooth, make smaller versions in Photoshop, and then upload those to WordPress’ media tool. There’s probably a simpler way to do things, which I will figure out presently (before anyone notes it, I could just make them lower resolution when I take them, but I’d actually like to have decent-sized pictures of the trip, not just ones I can immediately upload), but at the moment it’s kinda silly complicated, so, again, don’t expect too much this week (also, and again, I expect to be busy here on the boat in any event).

Before I go, however, check out this awesome shirt from Deirdre Saorise Moen, based on my Twitter reputation as a “Universal Blame Accepter” (i.e., if you need someone to blame for something, go ahead and blame me, since I already get blamed for a lot of ridiculous things anyway). You better believe I’m getting one when I get back to the world.