This is cool: Redshirts being used as part of a church sermon (specifically at St. Dunstan’s Episcopal Church in Madison, Wisconsin). It is, logically enough, being used a bit like a parable (or at least a framing device) to help discuss a larger and more complicated theological idea. I like it when my work finds use in interesting ways like this. The sermon’s pretty good, too.

(Thanks to Pamela Grenfell Smith for bringing it to my attention.) 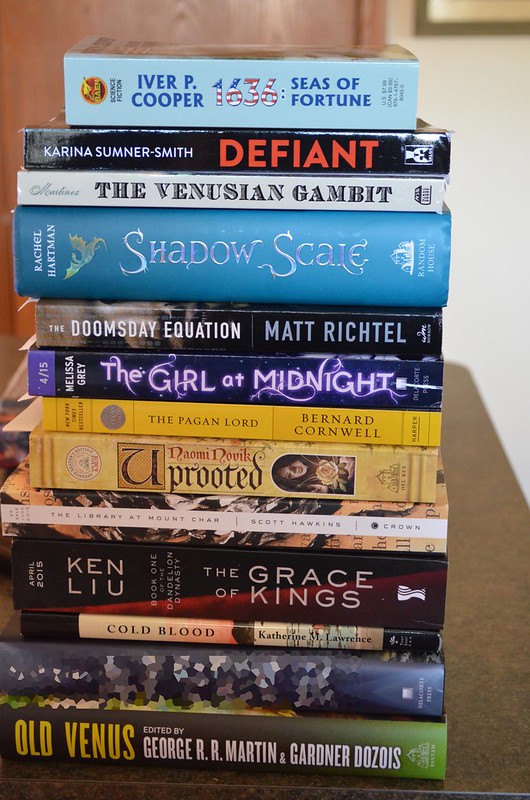 And now caught up on books that had come in before this week! (One of the books here is pixelated out because it was featured before.) See something that speaks to you? Tell us about it in the comments.

In his novel Flex, author Ferrett Steinmetz comes up with a rather ingeniuous way of controlling the ultimate cosmic power that magic-wielders could have against the rest of the world — and suggests why maybe magic isn’t always what’s it’s cracked up to be.

We all have obsessions. I have a friend who’s played through Dragon Age eighteen times so she can hear every one of the 80,000 potential lines of dialogue. I have a friend who scrutinizes the Internet code that determines where text is placed in your browser, in the hopes of discovering that the webkit-transform property actually rotates an image 7.3 degrees, not 7.0 as promised.

What if those obsessions started to wear holes in the universe?

What if, merely by pouring so much attention into some random hobby, the laws of physics would soften to fit your outlook on life?

And what if the universe hated you for bending its rules?

Personally, I’ve always hated those stories where magicians a) had no limitations on their power, and b) weren’t ruling the world. If magic came with zero drawbacks, then wizards would clobber the paranormally-illiterate with magic missiles in less time than it takes to say Neanderthals went extinct.

So when I wrote Flex, I wanted a really good reason why magicians hadn’t kicked Obama off the White House and installed themselves as the Eternal Emperor-Kings of Washington.

The key was obsession. I liked the idea that every ‘mancer would have their own set of powers keyed to whatever snared their attention – illustromancers, videogamemancers, origamimancers, deathmetalmancers – but that tight focus would be as much a hindrance as a help. By the time that Crazy Cat Lady has crossed the event horizon to become a felimancer, her priorities had warped. Does a crazy cat lady want to rule the land with an iron fist? No! She wants a house with infinite corridors so her kitties can roam safely under her benevolent cat-centered pocket empire.

Yet when my sister-in-law almost died, what I needed was a bureaucromancer.

See, I fantasized about having a magical power over paperwork when I was fighting the insurance companies to get life-saving surgery for my sister-in-law. She had a rare disease (at the time, her malady didn’t even have a Wikipedia entry). The insurance company kept returning our paperwork because we filled out the wrong form, even though that was the form they’d sent us. They claimed her treatment was experimental (and hence uncovered), when in fact so few cases of this disease had surfaced that every treatment counted as experimental. They refused claims for ridiculously trivial reasons, hoping my sister-in-law would quietly kick the bucket before they’d have to shell out $200,000 for her kidney surgery.

You can get wrapped around the axle, seeing that kind of injustice. My sister-in-law’s okay now… but even the slightest discussion of medical paperwork can send me into a frothing tirade.

So when I envisioned a magic system based on obsession, the first thing that came to mind was the living hell of a compassionate man working at a cut-rate insurance company like the kind that almost killed my sister-in-law.

And so I created Paul Tsabo, employed him at crappy ol’ Samaritan Mutual, and drove him magically insane.

To Paul, paperwork is power. Fill out the right requests for information, and governments will fall. Now Paul can send SWAT teams crashing through your door by magically dropping warrants onto the right people’s desks.

He is righteous. He is pure.

Now, I don’t plot my books extensively; I just find a person I like well enough that I’d be willing to follow them through four hundred pages’ worth of book. Paul was the kind of stand-up dude I personally would root for.

But sadly, the grand tradition of fiction is this: choose your hero. Yank him out of his comfort zone, plop him into a new battleground where all of his strengths no longer matter, where in fact all those grand ideals may be liabilities. Make sure he’s going to have to either grow new talents to survive, or die horribly as he clings to the wreckage.

I needed to make Paul’s life a nightmare. And having watched my sister-in-law’s health dwindle, I can tell you that there’s no greater hell than watching someone you love hurt and being unable to help.

So when Paul’s daughter gets burned in a terrorist incident, he doesn’t have the skills to magically summon up the money he needs to get her the reconstructive surgery. Because, he’s new to this whole “bureaucromancy” schtick, a complete novice at his powers – and as mentioned, the universe hates ‘mancy. Do enough magic, and the universe rains horrific coincidences down upon your head, sabotaging you with bad luck until the scales are balanced out.

(We’re not even going to talk about the Bad Thing Paul accidentally did to his kid the first time he tried to save her.)

He’d do anything to save his kid, of course. So what profession, I asked, was a paperwork-loving, government-adoring bureaucromancer least suited for?

And who’s the only person who can help him to master his magical backlash so he can get his daughter the treatment she needs?

That’s right; the videogame-playing, magical terrorist who burned his daughter. Who happens to need some help brewing magical drugs.

Ladies and gentlemen, explosions are about to begin. Big magical battles. The quiet implosion of ideals meeting a raw and ruined reality on the ground. Obsessions compromised.