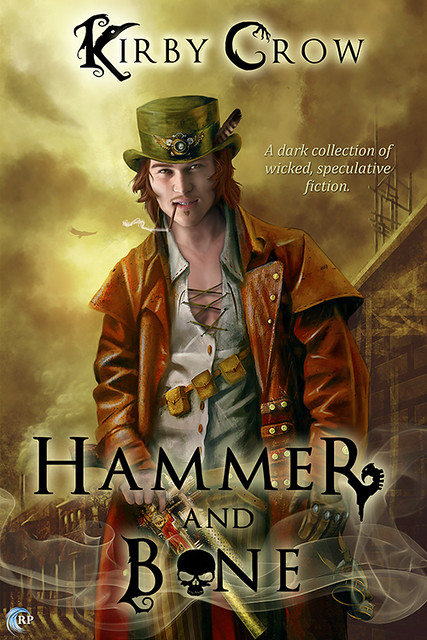 Life doesn’t always give us a happy ending. Should fiction? Kirby Crow ponders this question in relation to her new collection of stories, Hammer and Bone. Let’s see what she has to say on the matter.

I think of stories like wagons or carts, one of those cute, rustic ones you see being pulled by a shaggy pony in Lord of the Rings. I load the cart up with things that appeal to me or that I need, beautiful things and grotesque, things I want to say or things that just need saying, and then I choose a street to wheel it down. Anything at all can be inside the cart, but the street is crucial.

Okay, it’s weird. Bear with me… The street is everything, because it doesn’t just represent the genre; it’s the unity that binds the story together, the reason for its existence, why I’m telling the story, how I’m telling it.

Hammer and Bone has a long history, and the original idea was to bring together a collection of diverse tales featuring non-white heroes. I knew that was going to be a hard sell to a publisher, but I got lucky and found a great one. Despite the triple-threat gamble of being a collection rather than a single story (difficult to market in any genre), non-white characters inhabiting most of the pages (ditto), and overall a wicked and occasionally disturbing read, Riptide believed in Hammer and Bone, and here we are.

I didn’t set out to write such a sinister book, but occasionally stories have a will of their own and depart on journeys you never considered, or expected to have to write your way out of. At one point, the process stalled completely. I was stuck and growing very frustrated with the path one of my characters was taking to resolve his troubles in the Southern gothic story, Sundog. Where some people might burn bridges, Michel would walk into the fire. It was the same with Bellew in the speculative world of Crank, who was inclined to hack through the middle of an obstacle, and Angelo in Hangfire, who took a road that only the most wronged would even consider.

My heroes were strolling willingly down the most painful streets, when taking a detour or even walking away would have been so much easier. I wondered what kind of courage that was, if there was a name for the kind of bravery that smiles at the devil just until his back is turned.

I began complaining to my husband about them. I drank too much coffee and slept poorly and I wondered loudly and dramatically if I should rewrite their existence. Life had given them options that were too narrow. Their worlds were too frightening. Things probably weren’t going to turn out well for them.

There is that, yeah. Every life is backbreaking in its own way, even fictional ones. The main quality I’d struggled to reflect in the stories was honesty, and although steering your readers to a fair sunset is usually the point of storytelling, it isn’t always what happens in real life.

Sometimes it’s not what should happen, either. Not every character deserves a pretty sunset.

That was when I stopped trying to push it all down the road to Happily Ever After, or any destination that didn’t feel true. I wanted readers to turn the page thinking Yes. That’s exactly how that would have gone down.

Don’t worry, it’s not all constant anguish and despair. Sometimes there’s a happy ending and sometimes not, but the somber, seductive travelers of Hammer and Bone hereby promise to charm and entertain you in their own grim ways, as they invite you to question what perilous roads you might choose if you were snared into their worlds.