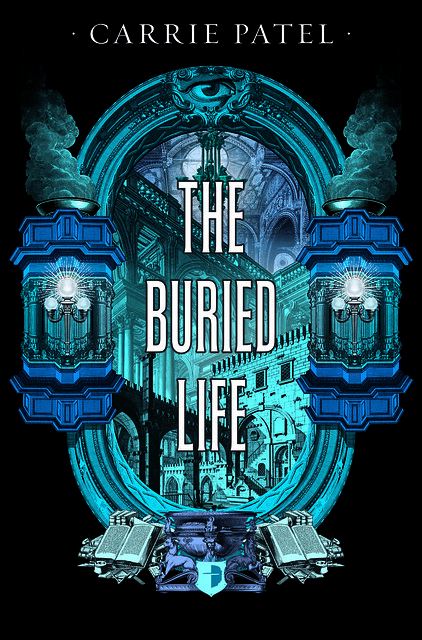 When you build on secrets you never know what you’ll find. Just ask Carrie Patel, whose novel, The Buried Life, includes secrets literally built upon. What’s going on there?

The Buried Life is about lost history, a forgotten catastrophe, and the city that springs up in its wake.

It started with the city: an underground metropolis where squalid, smoke-choked burrows nestle next to magnificent caverns framed with fire and stained glass. It was a place of glamor and grime.

I suspect that lots of speculative fiction begins with a setting. You take a mental snapshot of a new world that captures the atmosphere and the highlights. It’s a start, but it’s not enough. You need something you can walk around in.

So, you sketch the landmarks that exist just outside the frame—historical context and regional conditions. Things that anchor your new city and prevent it from drifting off into the stratosphere. Next, you sharpen the image to bring out the colors and details so that your snapshot will look just as bright and vivid to everyone else when you finally share it.

That leaves you with a fabulous backdrop, which isn’t the same thing as a story.

However, it’s the process of building the city up and out that can turn a Nifty Idea into a Big Idea. The Big Idea is what gives logic and context to the details that make up a vibrant, unique world. At some point, when you’re rooting around in the bones of your city, stringing all those tendons together and trying to get the blood flowing from one end to the other, you stumble upon its DNA.

That’s when you find your story.

For me, the “aha!” moment came when I saw Recoletta, my new city, for what it was: one civilization built in the hollowed-out corpse of another.

At that point, all of the cool flourishes and atmospheric touches were tied together by the inextricable bonds of context. Recoletta was built underground because it had started out as a city-sized bunker in more desperate times. A strict social hierarchy developed because, in the early days, people handed the reins over to individuals with practical skills—engineers, doctors, miners, and so on—and left the grunt work to the lawyers and politicians.

By the time events in The Buried Life roll around, people have stuck to their underground homes because old habits die hard. And the “whitenails,” the people with enough clout to keep their hands clean, are still at the top of the food chain. It’s the post-post-apocalypse.

But the most interesting detail for me was how these fictional citizens related to their troubled history. In the world of The Buried Life, they don’t reconstruct it. They hide it.

The widespread fear of history becomes a superstition. Ideas of the past are seen as dangerous and virulent—after all, didn’t they drive humanity to mass destruction centuries before?

And that’s where the story came from—the tension between a history that almost no one wants to face and the intrepid few who are trying to uncover it. The Big Idea is about constructing a city built on secrets and leading the heroes to its heart.