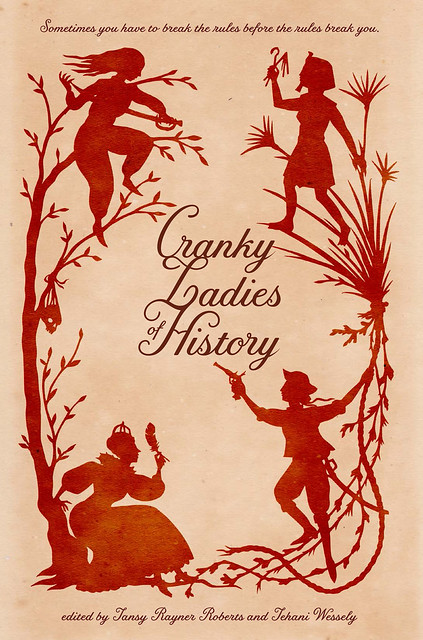 It’s Monday, and what better day than this to explore the realm of the cranky? But as Tansy Rayner Roberts and Tehani Wessley, editors of the Cranky Ladies of History anthology explain, “cranky” shouldn’t always be considered a negative. In fact, in this context, it’s meant to be pretty damn awesome.

Cranky Ladies of History was one of those projects that basically sprang fully formed into being. It began with a face, glaring out from an oil painting. Australian social justice and media blogger Liz Barr posted an image of Tsaritsa Sophia Alekseyevna of Russia on her Tumblr account and then, receiving a hugely positive response to Sophia’s fierce expression, wrote a short essay about the woman in question, calling her a “would-be usurper, all-around cranky lady”.

There’s something about that phrase: cranky lady. There was a time when it would have been seen entirely as a put-down, a dismissal of female strength and power. Yet the idea of celebrating women for their crankiness—rather than their beauty, their docility, their compliance—feels empowering and deliciously rebellious. It was a phrase that struck us immediately, and when we tweeted about how much we would love to read stories about cranky ladies of history by some of our favourite authors, the response was instant and immediately positive. Within hours, the idea had coalesced into a concept, and then into a plan, which continued to grow as the interest did.

From the start, when we talked about ‘Cranky Ladies of History’ as an anthology concept, people got excited. These days, when we give people advice about setting up successful crowdfunding campaigns, one of the first things we tell them is to choose the idea that sells itself—where people get excited from the first sentence, from the title of the project, before you’ve even explained all the nuts and bolts and rewards and payment options, you know you’re on a winner.

Cranky Ladies was one of those ideas. We found ourselves in a whirl of positive interest, not only from writers who wanted to pitch stories to us, but from mainstream media and many people who didn’t have the time or the inclination to write for the book, yet still wanted to support it, to promote it, and to help out with the campaign. So many people we talked to wanted this book to exist, even if they weren’t personally involved, and that turned out to be crowdfunding gold. We pulled in many of our most enthusiastic activists to help with the campaign, to blog about their favourite cranky ladies, and to spread the word.

We had chosen March (Women’s History Month) for the campaign almost on a whim, thinking it would be cute, but the further we got into the month the more we realised that people were hungry for these stories, not even just the fiction that we promised, but the anecdotes and essays about lost and misquoted and reclaimed women from history who were fierce, uncompromising and yes, cranky.

The positive response we received to the Cranky Ladies crowdfunding campaign was invigorating and inspiring—especially when International Women’s Day brought national media attention to a book that didn’t even exist yet. When you’re making art that you think is challenging, rebellious and potentially controversial, there is nothing better than the feeling of having a crowd at your back, putting their money where their mouth is, cheering loudly, and keeping you company every step of the way.

Twelve months later, the journey to publication is complete. We read so many pitches about amazing women of history who damn well deserved to be cranky that we could have filled three volumes. Though there was no way we could publish all of them, we can only hope this book shines some light on a few women who may otherwise be buried under the weight of the years, and maybe inspire our readers to seek out even more.