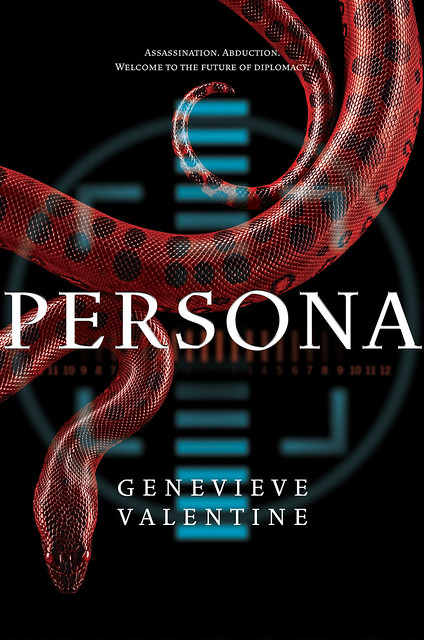 So, how does one go from the swirly, chiffoned world of pageant dresses to the corridors of international diplomacy? In Persona, the journey is neither as strange nor as difficult as it might seem. Author Genevieve Valentine is here to explain why.

Once a year (or whenever Donald Trump remembers), they hold Miss Universe in a photogenic city, where photogenic ladies line up for swimsuit shots and candid footage of them laughing and embracing and loaded interview questions. And, somewhere between the golf outing and the evening gown competition, they hold a parade of national costumes.

The spectacle is sublime: the National Costume segment is particularly amazing for fans of sartorial patriotism and/or fans of watching people trying really hard to sell an awkward concept. (This isn’t just the fault of the inevitable collection of halfhearted capes; a few years ago, Holland sent its contestant out with a windmill strapped to her back, and America, one of the biggest repeat offenders, sent an actual Transformer across the stage last year.) Of course, some of the contestants decide to stick to more direct interpretations of national costume, and from saris to bunad, it’s a beautiful parade.

The trick is: It isn’t up to the contestants, is it? The national costume designer was selected by committee long before that contestant came along; she’s just the walking hanger on which it needs to be fitted. These contestants are a big deal to many countries, of course, and have to undergo all the usual rigors of being subjected to competitive public presentation, from swimsuit competition to interview answers. Even the pageant calls them ambassadors –  ambassadors who have to keep a flawless complexion, procure identical noses, and remain a size 2. They still have to take responsibility when pageant politics leaks into the real world (this year, Miss Israel appeared in a Miss Lebanon selfie and Miss Lebanon caught scandal for allowing it), but their actual power, of course, is – literally – slim.

Still, after reviewing the Miss Universe costume contest for a year or two, the question seems unavoidable: What if the world had made room for a celebrity culture of statecraft? What if the pageant never stopped?

The answer, of course, is that those who can’t deal openly would deal in the shadows, and get angrier by degrees. To me, one of the most interesting aspects of a spy story has always been how it overlaps in form and function with more visible statecraft; how, almost by default, everything that happened at royal courts were a series of spy novels overlapping. Every cabinet meeting was Operation Witchcraft; every marriage was a political contract; every public appearance was a chance to state your intentions and an obligation to reaffirm your alliances. (And what you wore did half the work for you: Red for England, blue for France, black and white to catch the eye of the queen. It’s a system that’s grown with us onto the red carpet: white for the virginal and young, black for the vampy, every premiere a chance to chat to the press that’s been instructed to be nice, and to reaffirm your alliances.) The idea of hitting the red carpet and grinning for cameras on your way out from negotiating someone’s death sentence is hard to shake.

Turns out it was so hard to shake, I wrote Persona, which folds not-quite politics into a not-quite United Nations with some not-quite celebrity culture to go with it. Suyana Sapaki, the delegate of the United Amazonian Rainforest Confederation, is a C-lister by diplomatic standards: the country’s still young (an uncomfortable marriage of two disparate states out of desperation to protect natural resources), and it’s had a little trouble, and Suyana is constantly at war with herself about how much to give in to the publicity machine – if that would even help; there’s no knowing if it will until you’ve already given in. And this is before she gets shot.

As it turns out, there isn’t any pageant in Persona – not technically – but there are definitely recognizable elements, right down to a glamour shot of Suyana standing amid the rainforest green, clearly meant to look approachable and absolutely unable to manage. (I’d never imagined we’d get a real-life version of that shot that so exactly captured the mood I imagined; the photo looks, if you discount her expression, exactly like the endless scrolling list of swimsuit shots on the official Miss Universe site. If you count her expression, of course, the game changes.)

There’s no shaking the inherent comedy of Miss Universe, which has managed to become its own real-time example of a good idea taken by commercialization to its logical conclusion. (This year’s national-costume winner, Miss Canada, showed up as a hockey game. Yes, the whole game. But some of those dresses were statements of pride, and some were just plain statements, and they’re all a reminder that those who control the image control the story; Suyana knows it, too, if she lives long enough to use it.