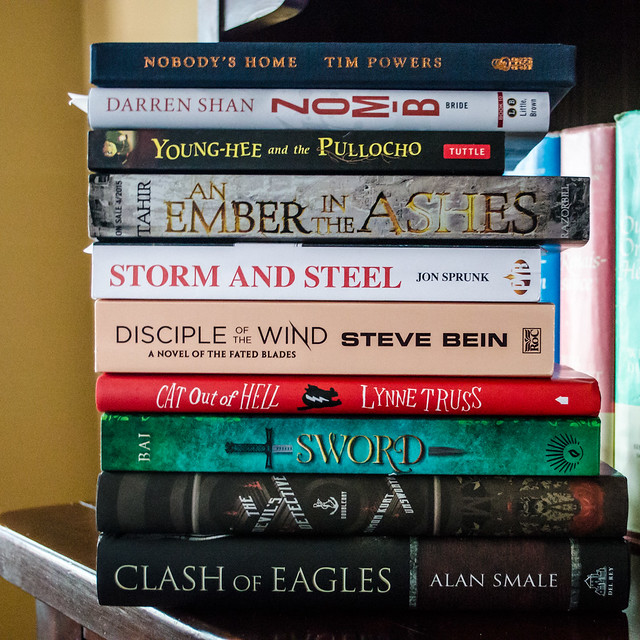 Been a busy week for new books and ARCs because, well, some weeks are like that. But on the other hand, it’s also been an excellent week, and today’s installment is no exception. See something you’re interested in here? Let me know in the comments!

So, I’m in crunch time on The End of All Things (which truth be told is running just a tiny bit late, which annoys me because deadlines are a thing I usually hit) and April is my Month O’ Travel™ this year. This will mean things for Whatever and my presence on social media for the next few weeks. Let me outline them for you.

From 3/16 – 3/29: Deeply limited posting here until the book is done. What I will likely do is what I’ve done in the past, which is, if the book is not yet done, to leave you with a question for the day that you may discuss amongst yourselves while I’m writing away (comment threads will still be moderated, although possibly not by me). There will also be Big Idea posts during this time.

Likewise during this time I will have almost no presence on Twitter and other social media until the book is done. Crunch time, folks. Book’s gotta get finished.

3/29 – 4/12: I will be in Australia, on Australian time, and busy with travel and two separate conventions. I’m likely to be posting here, but probably less than when I’m at home, time-shifted at that, and contingent on having access to wifi. I will probably be on Twitter more frequently, and again, contingent on wifi access.

4/13 – 4/20: In Los Angeles, doing business, attending the LA Times Festival of Books and slacking off when I’m not doing either of those two things. Again, less posting than usual here, probably, and you’ll probably see me on Twitter more.

Also for those of you keeping track of it, the 2015 edition of the Reader Request Week will be April 27 – May 3. A little later than usual, but see schedule above.

And now you know what to expect here for the next few weeks. 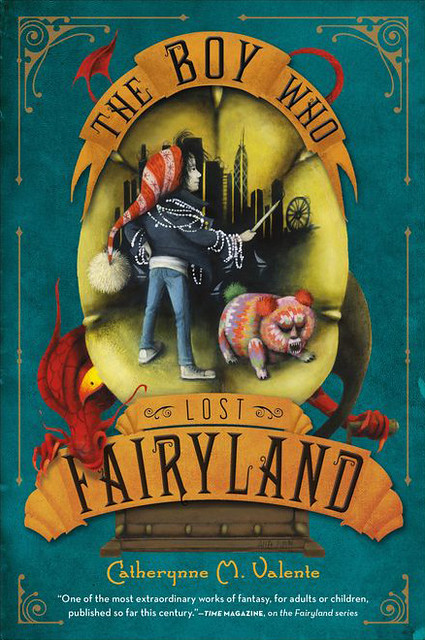 For the fourth book in Catherynne Valente’s wildly acclaimed and bestselling “Fairyland” series, The Boy Who Lost Fairyland, the author has made a slight change in the nature of the protagonist. And just why did she do this, and what does it mean for the world she’s created? We’ve got the answers for you today.

Long before the fourth book in the Fairyland series came out, I knew I’d be writing this essay. I looked forward to it. I may be a silly person, but I am not a silly author, and I knew very well that The Boy Who Lost Fairyland would be a giant elephant in the room—an elephant in the series. There would be a Question most would be too polite to ask. Those are my favorite kinds of questions.

So here I am, present and accounted for, ready to ride that big beautiful elephant through the sofa set and the good curtains.

Cat, why, after three books about one plucky female protagonist that most readers think is pretty swell, would you suddenly start writing about a boy? And baseball? With a short title?What’s going on? Have you been replaced by a mirror universe Cat?

I think you can see by my lack of goatee that I am, in fact, this universe’s Cat. I have not lost my mind. Nor my protagonist. Do not be afraid. September has not decided to go on a coffee break. She is very much present and active in the fourth installment of her story. I will never give my girl up. But sometimes a story is bigger than one protagonist.

The simplest explanation is that I didn’t know how else to tell this part of the story than by moving the camera onto someone else. I never want to write the same book twice. I always want to do something new, something that shakes up the previous books and my own writing comfort zone. And I’d wanted to write about the Changelings for ages. Since the second book I knew that they’d be the key to the resolution of the whole series. The fourth book was always going to be the Changeling book, because those kids wanted to be heard.

The thing is, we’re all Changelings. Every child and every adult. We all feel alone sometimes, like no one can understand us no matter how hard we try, like we come from somewhere else and everyone has life figured out but us. Some of our bodies don’t match our hearts. Some of our minds don’t match the world around us. Some of us are isolated because of what we look like or how we talk or a thousand other reasons. We’re all the stranger in the house at one time or another.

And kids quite literally are Changelings. They are brand new. They don’t know the rules. They came from somewhere else and are making some stab at being a hero in this new land. Ever wonder why it’s such a common fantasy for kids to think they must be adopted? It comes from this feeling of not fitting into the world at hand. They are full of impulses they don’t understand and the world constantly tells them not to follow those impulses—but it’s plainly impossible not to. Everything is bizarre and magical and unbelievable because childhood is a foreign country where a child can only learn the language and the customs slowly, and with a lot of mistakes. And because the human world really is a bizarre and magical and unbelievable place. Part of the reason children love fantastic literature so much is that to them, it’s not really fantastic. It accurately reflects their experience—they’ve been dropped into a world of wonder and power, a world in which they are helpless, but growing stronger every day.

Adulthood is not very different, honestly.

So book four was always going to be a Changeling book. But for a long while the protagonist was female, because that was the nature of the Fairyland series, and the dominating mission of the series was to write about a girl who embraced the magical world rather than rejecting it, as Dorothy and Alice had.

But as I planned out the book, I turned it over and over in my head. There is more to feminism than turning the focus from boys to girls. We’ve presented so many new literary roles and places for women in the last few decades, and that’s been a huge part of my whole mission statement as an author. But boys need new roles and new places, too. We encourage girls to take on the mantle of the male hero—and I wanted to encourage boys to take on the mantle of the female hero, as well. A boy hero can be gentle and artistic and bookish and afraid of the world—and still be a hero while staying gentle and artistic and bookish and afraid of the world. He can be friends with girls without it being weird. He can wear weird clothes and his mother’s jewelry, he can have beautiful penmanship and talk to his stuffed animals well into middle school, and those can be heroic attributes just as much as punching and running and yelling and swinging a sword. Sure, I gave him a baseball. But it’s what you do with a baseball—and what it does to you—that counts. And maybe, just maybe, boys in the real world will find it a little easier to be gentle and wear jewelry and be friends with girls and ask their librarian for a book with Fairyland in the title.

September will be back in the driver’s seat (quite literally) in the fifth and final book of the series, The Girl Who Raced Fairyland All the Way Home. The Boy Who Lost Fairyland is the story of Fairyland itself, and what it gets up to when September isn’t looking. Hawthorn the Troll and Tamburlaine and Scratch the gramophone and Blunderbuss the scrap-yarn combat wombat will join Saturday and A-Through-L and the Marquess and the Green Wind to make one giant king rat of a tale—a tale that couldn’t be told without every single one of them.

In the meantime, come be a Changeling with me, and I promise we’ll make some fine trouble together.