Is the novel finished? NO

Today’s question: Name a favorite song in a genre that you don’t typically listen to.

My answer: “My Friend (So Long)” by DC Talk, in the Contemporary Christian genre:

Because it’s a pretty sassy song in which (as I understand it) the band addresses the accusations that they sold out by becoming popular in the mainstream — the album this song was on showed up in the Billboard Top Ten, which in the 90s was a nice achievement (and still is, actually). I’m definitely not the Contemporary Christian market demographic, but this song’s attitude and presentation always worked for me. Among more contemporary bands, I could see someone like Muse doing a song like this.

(PS: If you link to a video in your answer, it’s possible your comment will be punted into moderation automatically. Don’t panic, I’ll check in every once in a while to release moderated comments.) 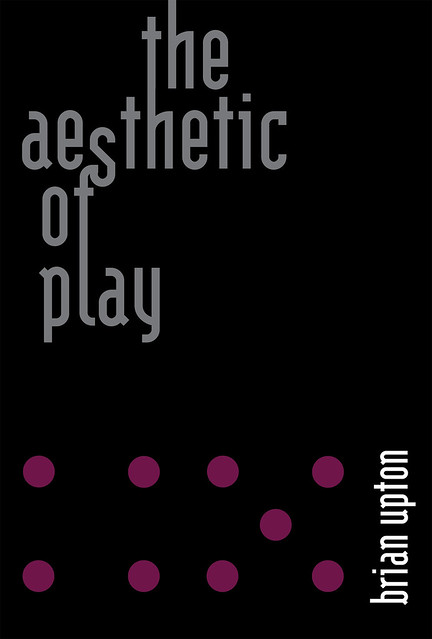 It’s fair to say that Brain Upton knows about a bit about video games: He’s the co-founder of games studio Redstorm Entertainment, was the lead designer of several games there, and currently works at Sony. It’s also fair to say that Upton has thought about what game design means more than most people ever will. The result of both that experience and that theorizing is The Aesthetic of Play. Upton’s here to explain how this book differs from other treatsies on game design, and why it matters.

The Aesthetic of Play exists because I was unhappy with other books on game design. They were good at explaining the mechanics of playable systems – how to build fun levels or write interesting rules – but they were not so good at explaining how meaning emerges from the experience of interacting with those systems.

The idea of meaning-making with games is important to me because I believe that games have tremendous untapped artistic potential. Many designers are groping toward something bigger, and recently there have been some games (Journey, Portal, The Last of Us, to name a few) that have hinted at the possibilities of the medium.  But we’ve been held back by the lack of a critical methodology. We’ve tried to adapt literary theory to our purposes, but it’s been an uncomfortable fit. (If you’ve heard of the “narratology/ludology wars” you know just how uncomfortable a fit it’s been.) Books are made of words, and so the meanings they generate are often easy to articulate. But games traffic in the ineffable. A great game can change us, but it’s frequently hard to describe exactly what the change was, or how it came about.

So The Aesthetic of Play began with me sitting, alone and dissatisfied, at a table at the Game Developers Conference in 2008. I was thinking about a future talk I might give about meaningful play, and I sketched out a rough set of diagrams to help me organize my thoughts about how players experience games. Instead of concentrating on rules and interactions, I focused on players’ moment-to-moment intentions and beliefs: What did the player think was happening? What moves did he think he was making? Or even … what moves was he making without thinking? Over the course of several months following the conference, this player-centric model of game analysis gradually coalesced into a set of design heuristics – a list of “rules for interesting experiences” that was significantly different from the “rules for interesting systems” that most game design books teach.

And then things got weird.

It was my wife’s fault. She’s a professor of music history at UCLA and she’s interested in songs, both old and new. Songs are a hard thing to be interested in if you’re a music history professor because they’re seriously under-theorized. If you study symphonies (for example) there’s a huge body of scholarship you can draw on that’s directed toward how symphonies operate as systems. But songs are so simple that there’s not a lot to be gained by that sort of structural analysis. You can catalog the chord progressions in “I Want to Hold Your Hand,” but that doesn’t get you very far toward understanding why listening to a Beatles song is so powerful.

As my wife and I talked to each other about our work, we slowly came to realize that I was answering many of the questions she was asking. The same methods I was using to analyze player experience could also be used to analyze listener experience. In fact, they could be used to analyze any sort of aesthetic experience.  I’m not a musicologist, so I didn’t feel comfortable writing up our observations in musical terms. But I do know a fair bit literary theory, so I wound up translating our conversations about aesthetics and play and music into a methodology for close reading of texts. Basically, instead of trying to adapt literary theory to analyze games, I invented a new way to use game design to analyze literature.

All of this came together in the first draft of a book near the end of 2010. At the time it was called Gaming the System (which I can see in retrospect was a horrible title). I sent it off to MIT Press, my first-choice publisher, and was rejected. It was a “revise and resubmit” though, not an outright “no”, which was encouraging. The editor said he liked a lot of what I’d written, but that the manuscript felt like two books stitched together. He had a hard time understanding how the heuristics of game design related to the analysis of narrative.

Fixing this problem was hard. I could feel the connection between the two halves of the book, but I didn’t have the language to articulate it. So before I started revising, I spent several years researching philosophy, neuroscience, and semiotics in order to construct an explanation for how these seemingly disparate ideas are linked. This deep dive strengthened the book in unexpected ways. Not only did I rewrite the entire manuscript from start to finish, but I wound up adding four new chapters exploring the philosophical ramifications of this approach to thinking about games and art.

The final draft of The Aesthetic of Play is as much about epistemology as it is about games. It uses play as the starting point for investigating how we exist as thinking creatures within an unfolding universe. It explores how a tendency toward play is an unavoidable byproduct of a particular epistemological stance – we don’t play to learn; we play as a consequence of being able to learn. And it shows how adopting this model of aesthetic reception offers surprising insights into narrative questions – why certain plot structures work better than others, for example, or how foreshadowing functions.

I realize this probably sounds ridiculously ambitious for what started as a simple book about game design. I didn’t set out to write a philosophy book, or a narratology book.  The manuscript just went in that direction because I couldn’t figure out any other way to answer the questions I found myself asking. My wife is happy though. We joke that I gave her a critical theory as a present. The two of us are currently collaborating on a book about play and music. It’s not clear yet where that book is going either, but we’re certainly asking ourselves some interesting questions.