Second, as you know, The End of All Things, my next novel, is comprised of four novellas, each of which to be released electronically before the debut of the print/combined eBook edition. If you follow this link to Tor.com, you will get to see all the novella covers, each from the fantastic John Harris, and the release schedule for the novellas. The hardcover will be out (in the US) on August 11.

Click that link, folks. Lots of John Harris awesome on the other side of it. 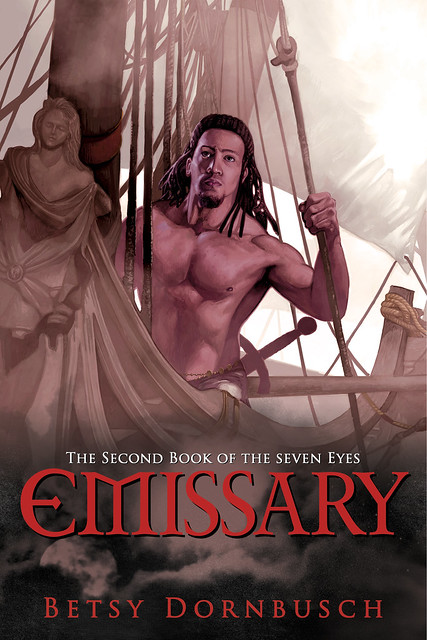 Wherever you go, home draws you back — for good or ill. This is something the hero of Emissary learns in the course of novel; author Besty Dornbusch is here to expand on the concept for the rest of us.

A decade ago I wrote a book called Exile in which a man called Draken is (predictably) exiled for a murder he didn’t commit and has to scrape together a new life in an enemy country. I’d thought upon writing it would be a standalone, but a few years ago I realized I wanted to torment Draken some more. The idea for Emissary took root when I asked, What’s the worst you can do to a guy who’s been exiled?

It’s send him back home, of course.

You can’t every really go home again, or so Wolfe’s book title has passed into adage, but a lot of us try. Even if we were unhappy there, early homes often draw us back, even the places where no one we knew lives anymore. I just saw got a text from my brother who visited our grandparents’ town in Kansas. (Grannie and Granddad’s house is gone, but the town pool and park and water tower look just the same.) For other people, it’s taking school breaks from university, or bringing our children to visit family, or returning to help a loved one die. It can be simple economics: after trying to make a go of it on their own, many young people move back to cramped childhood bedrooms and even more cramped lifestyles.

Sometimes it’s tough to decide which is closer to exile, the new life or the old. In Draken’s case, his old life started with abandonment by his mother, a disgraced royal cousin. All he built for himself, despite never fitting in with the royal family, ended with the murder of his wife. Draken crawled ashore in his new country with nothing.

Still, with help, he made a decent success of his exile. When Emissary starts, he has a girlfriend and a baby on the way. A stable career. Friends. Money. Magic. Sure, he’s got secrets. Who doesn’t?  His are an ocean away and the people here regard him as a hero.

But when old compatriots blackmail him into helping his cousin-King settle a religious revolution back home, he has no choice but go back. Upon his return, Draken sees the cultural and family dynamics with the fresh vision of a man who has traveled the world and changed his life. What he once believed to be a magnificent, enlightened country is rife with gilded flaws—not the least that the revolutionaries crave Draken’s magic for their own. Ugly undercurrents threaten the foundations of an ancient city; betrayals pit nobility against kings and priests against gods; and a pervasive new faith in magic has parents willingly sacrificing their children to protect it.

Emissary tells the story of Draken’s struggle to stop a war that could destroy both his old and new countries. But more importantly, his journey home forces him to shed the assumptions, habits, and hatreds that kept him going in the darkest of times. Like many people returning to their childhood homes—and the same old hurts and dynamics—he must decide if he’ll succumb to the wounds from his past or fight for a better future.