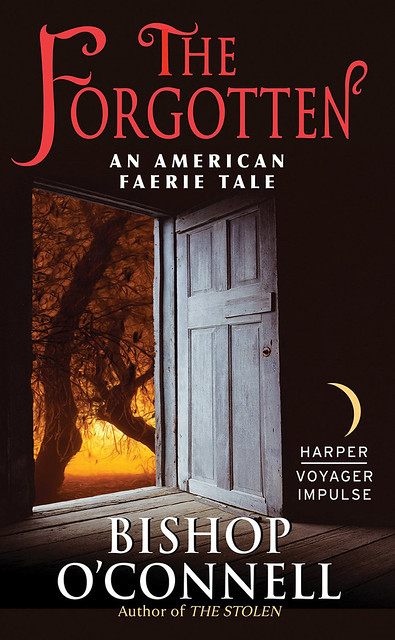 For The Forgotten, author Bishop O’Connell thinks very seriously about a famous Arthur C. Clarke quote and how it can apply to the world of fantasy. Would Clarke be proud? Perhaps!

Let me preface by saying that I’m not a scientist. I’m just a layperson who took some classes in college and enjoys researching and learning on my own. That being said, I love science! More specifically, I love physics and quantum mechanics. That might sound strange coming from a fantasy author, but I love how physics can put complex ideas into relatively simple terms: force equals mass times acceleration, every action has an equal and opposite reaction, etc.

But, I really geek out about quantum mechanics and how it seems to turn everything we understand about the universe on its head. Concepts like wave-particle duality, superposition, entanglement, and the uncertainty principle are endlessly fascinating to me. As our understanding expands, it seems that the lines between not just science fiction and science fact blur, but also science and fantasy. With that in mind: can a system of magic be explained using quantum mechanics? That is my Big Idea, or perhaps I should call it my Big Theory.

My novel, The Forgotten, has two points of inspiration. The first is Arthur C. Clarke’s third law: “Any sufficiently advanced technology is indistinguishable from magic.” It seems straight forward. Without understanding the scientific principles behind something, it might as well be magic. An LCD screen would be like a magic window to someone from the Dark Ages.

The second point of inspiration is the double-slit experiment. To grossly oversimplify, the premise is this: if you shoot particles at a screen through two slits, you would expect to see two stripes on the screen, mimicking the slits. But you don’t, not even if you send the particles through one at a time. Instead, you see an interference pattern of many alternating bars. That means that individual particles are actually behaving like waves and interfering with themselves.

However, when you place detectors at the slits to see what’s happening, the interference waves go away and you get two straight lines, matching the two slits. The particles cease to exist as waves of probability—existing in all possible locations at the same time—and coalesce into a single location just by observing them! Even more remarkably, setting detectors anywhere after the two slits produces the same results. If they’re on, you get two lines. If they’re not, you get an interference pattern. So not only does observing the experiment change the results from that moment on, it changes the results before being observed.

These two concepts birthed a single question in my mind. What if the observer is what changes the outcome, rather than just the act of observing? That would mean we’re actually, unconsciously, altering reality. The next logical question is: could someone do so consciously and to what extent? If so, how would this be at all distinguishable from magic? After all, every magical effect you can think of can be explained scientifically. Teleportation? There’s quantum teleportation and worm holes. Throwing fireballs? Fire is just particles moving at an energy level that generates sufficient heat to combust a fuel. It’s theoretically possible, or rather not theoretically impossible, for particles to be acted on by an outside force to generate enough heat to combust the oxygen in the air.

Now, I hear you saying, “But Bishop, some of those effects require vast amounts of energy!” You’re right, and there are unimaginable amounts of energy all around us—dark matter and dark energy to name just two. We just don’t know how to utilize them…yet. What if our will, our belief, was the key to harnessing them?

Enter my main character, a homeless girl named Wraith. She sees the waves of probability all around us in the form of equations and symbols——quantum information. With conscious effort, she can alter those equations, thus changing the probability of specific outcomes and, in turn, the very nature of reality itself. Things that are so astronomically improbable that they can be called impossible become certainties. But what impact would this ability have on a person? And what if the person in question already had little more than a tenuous grasp on reality to begin with?

What I found was that I couldn’t imagine any situation where a person could do all this and stay sane or even maintain a sense of self. Who we are is defined by how we act and what we think. But if the structure of existence is less like a bedrock foundation and more like a giant sand dune, shifting and ever changing, how do we define ourselves? How do we know who we are? That’s exactly the question Wraith has to face. Naturally there are complications to answering that question. She isn’t sure how she attained this ability or how to control it. All the while, street kids—her friends and peers—are vanishing, some turning up dead.

Perhaps all these questions are just a sign that my own grasp on reality is less than firm. Luckily, I’m a writer, so that would actually work in my favor. But, to quote Dr. Sheldon Cooper (The Big Bang Theory), I’m not crazy, my mother had me tested.

(For a video demonstration of the double-slit experiment, see this video clip from Through the Wormhole)