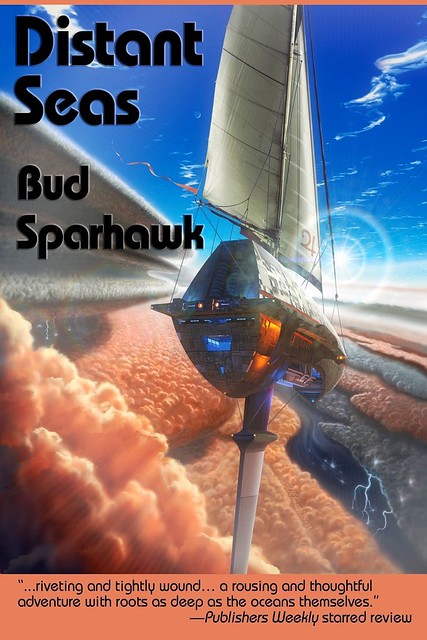 Bud Sparhawk is not only possibly the best treasurer that the Science Fiction and Fantasy Writers of America has ever had (says a guy fortunate enough to have been on the organization’s board with him), he’s also a hell of a writer, as evidenced by his latest novel, Distant Seas, which garnered a coveted starred review from Publishers Weekly. Bud’s here now to talk about the book, and what previously earth-based skill takes to other worlds in it.

The really big idea in this make-up novel is that sailing, balancing the forces of wind and water, is as much an art as a science. Running a true line with your hand on the rudder and the mainsail’s line in hand is both an expression of love between you and the boat and calculating the solutions to multiple simultaneous equations.

This story is my way of conveying the experience of sailing to readers who have never felt the responsiveness of a lively hull, heard the thrum of the wind on the lines, or felt the wind and water’s tension that integrates sailor, sail, rudder, hull, and keel into a single living creature.

I’ve always thrilled to reading about sailors racing around the world, braving mishaps, and surviving terrible weather by taking every precaution to avoid disaster.  I learned to sail on the Chesapeake Bay as a teen and was able to renew my love of sailing after we returned to the Annapolis area (aka Sailing Capitol of the World[1].)

There were several streams that brought Distant Seas into reality.  The first of these was my second professional short story, Alba Krystal[2], which described miners plunging into the dense atmosphere of Grimm, a gas giant, to collect volcanic gems thrown into the planet’s fierce winds.  That idea popped back into my head when, twenty years later, I read an article[3] on surface gravity and realized that a survivable two-gravity field would be well within Jupiter’s atmosphere.

And if, at that two-gravity level, there was as sharp a density divide as between air and water then someone could build a sailboat and, wherever there are sailboats, there will be a race.

But sailing on Jupiter is only one part of the story.  The “seas” on which Louella and Pascal race include Earth’s dangerous Southern Ocean, the wine-red seas of Jupiter, and the arid high plains of Mars.

The most difficult part of writing these stories was to imbue the protagonists and their sponsors, partners, and competitors with life, to give each of them individuality in speech patterns, personalities, and histories as well as delve into their motivations.  I worked hard to subtly show the forces that shaped each of them by continually trimming long and boring narrative passages until only the essence remained and then seeding these fragments among conversations, asides, and observations.

The second hardest part was making the sailing technology realistic. I did this by giving first general descriptions and then focusing on specific parts of the design; efficient for Earth’s around-the-world single-handed sailboats, rugged for the Jupiter dirigible/submarine craft, and light for Mars’ sand racers.

Do not for a moment believe that any of these plot lines emerged pure and unsullied from my brilliant mind. Much was composed while sailing on the Bay, sweating at the computer, and at random and unpredictable times. Paragraphs were shifted, descriptions changed, and entire swathes of passages obliterated.  I even typed the Martian race while wearing an arm cast that forced me to use a single finger of my write[4] hand.

But aside from developing interesting characters and believable technology, I wanted to get across the pure joy of balancing wind and water when carving a smooth line across the “seas” of the title.  I wanted to put reader in the cockpit with lines in hand, an eye to the sail, and a firm hand on the rudder.  I want you to be there, in the moment, as the protagonists deal with their problems in a realistic way. There are no unflinching heroes in this book, no miraculous salvations, and no mystical forces.  There are only people doing their best while fighting the winds and handling whatever fate deals them.

This is a book about being a sailor!

[1] Capitol refers to the State’s capitol, not sailing’s.