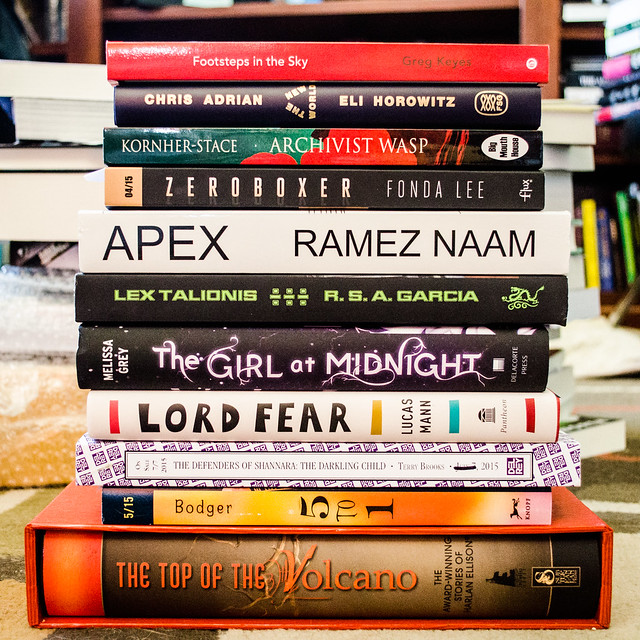 Once again, some high-quality selections in today’s stack of new books and ARCs. Tell me which of these sings a special song to you. Do it in the comments. 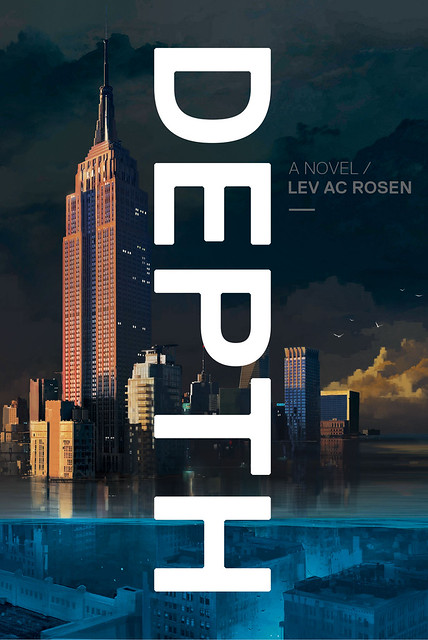 “Worldbuilding” isn’t always about building a world — sometimes it’s about taking the world and tearing it down it in one way or another. Lev AC Rosen wanted to use New York City for his novel Depth, but first it needed to be… distressed. Here’s how he went about that.

I’ve always loved noir. Hard-boiled detectives in particular, but I don’t mind an everyman in over his head, either. And I always knew I wanted to write a detective story at some point. I knew I wanted it to be in New York, because I was born and raised here and love my city, and more specifically in my neighborhood, Manhattan’s financial district, because the buildings here are old and look the way I think a noir should look. I also knew I wanted it to feel like the movies I grew up on, movies like The Big Sleep, The Maltese Falcon, The Blue Dahlia, Laura…

The issue I had was combining those two ideas.I don’t know if you’ve been in the financial district lately, but it’s not so gritty anymore. My neighborhood is losing its old school charm in many ways. We have shiny, thousand-foot high rises going up all over the place. Down the street from me is a “modern” building which from a distance looks like a stick of melting rancid butter.

I could have done a period piece. I thought about it. But I also wanted to write a female Bogart, and while I’m sure someone could write that as a period piece, it wasn’t working for me.

So my Big Idea was this: go forward to go back. Flood the world (or at least the new ugly high rises in my neighborhood).Take shiny, cleaned up Manhattan and bring it back to when it had some grit.I just looked ahead to where I thought we could be headed, and melted the ice caps. I even threw in some more ice to raise the sea level higher and faster than most estimates. Then I used some technology to save all the buildings I wanted and strung rickety bridges and decommissioned boats between them. I lit the city with the green glow of algae generators. It may not have had the same old grit, but it had salt, and that was close enough. This was a world I could shape in a classically noir mode, with shady dealings, hard-boiled banter, conspiracy… and, of course, murder.

That was the general idea, anyway, but as often happens with writing, it got a little away from me. Simone, my private eye protagonist, became something more than just a female Bogie – her friendships became stronger, her ex more important, her flirting and flings… well, those stayed pretty Bogie-like, though without the “can’t show this” aura of 1930s Hollywood. I also brought in new characters from the mainland, and from Europe, to show what was happening to the rest of the world and to offer differing viewpoints on it. These new characters and their experiences helped to build the book up in more complex ways.

We only catch glimpses of life beyond New York City in Depth, but thinking about it helped me understand what sort of people would live in this flooded world. Sometimes I felt I was creating too bleak a future, while other times I worried I was in danger of glamorizing global warming—noir, even when gritty, is still glamorous in many respects. Ultimately, I think, the tension between those two concerns helped to make Depth feel more noir. Because noir does walk the line between glamour and horror, righteousness and despair. My Big Idea became bigger than I meant it to, but I’m pleased with the results. It’s the noir world I wanted and I love it and am terrified of it at the same time.