Posting this Twitter rant here for posterity. This is Hugo neepery, but not of the usual sort I’ve been neeping about recently.

1. It's been recently suggested that I should be ashamed for getting the Hugo for Redshirts (by an author who hasn't himself read the book).

2. To be clear: I am not. I am deeply pleased it won, and I think it was entirely deserving of the award, and the other awards it won.

3. It's funny and an easy read, and if you think that's easy to accomplish as a writer — and still pack an emotional punch — well, try it.

4. The same author suggested (again without reading it), that it was a "social justice" sort of book, which lent itself to winning.

5. It is, in fact probably the least racially/sexually diverse book I've written BECAUSE the characters were supposed to reflect a BAD show.

6. Indeed, when the TV script for it was written, they CHANGED the sex of a couple of characters to make it more diverse! This is true.

7. So it really is a bad example of a Social Justice-y sort of book. Much worse, in fact, than my OMW series in general.

8. Also, if the "SJWs" vote en bloc, why would they award me, SWM, when Saladin Ahmed and Mira Grant were on the ballot?

9. The only answer here would be because the SJWs secretly crave straight white male leadership, which would be kinda not SJW-y at all.

10. I'm happy with the politics I have and I try to be a good human, which is apparently what makes me an SJW. But Redshirts is, in fact…

11. … a genuinely TERRIBLE example of a book to show influence of the SJW cabal, both in content, and in its year. It's a bad argument.

12. The book won for a number of reasons, including people just liked it. But because of an SJW cabal? Really, no. That's dumb. 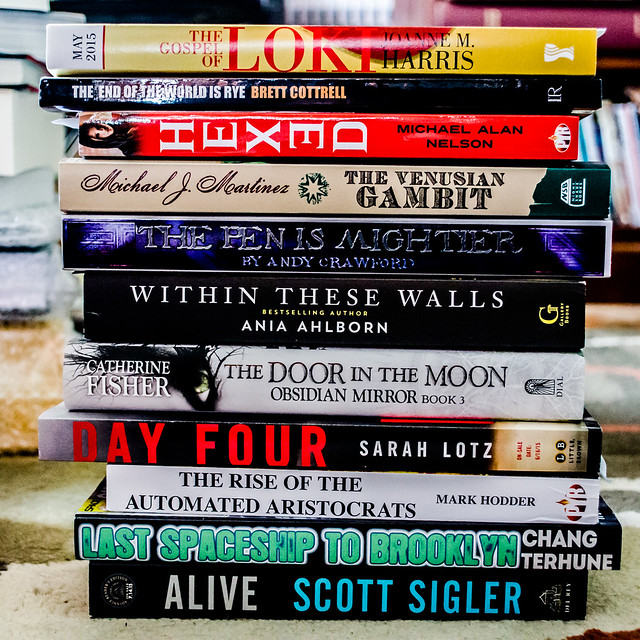 It’s been a week of new books and ARCs, and here’s today’s installment (there will be another one tomorrow, too!). What in this stack catches your fancy? Make note of it in the comments!

(Warning: Further Hugo neepery. Avoid if you’re bored with it.)

A question in email about a recent post, asking whether when I said, of one of the head Puppies, “So well done him, and I wish him all the best in his career,” if I was saying it with the same tone and meaning that a US Southerner might say “Well, bless his heart,” about someone they dislike, or see doing something irretrievably stupid.

Longer answer: No, and why would I? As a practical matter, and as hard as it might be for some to believe, publishing is not a zero-sum game; the success of other authors doesn’t have a direct or material effect on my success, except with regard to the small, indirect benefit that a genre that sells well has more readers overall, and those readers are unlikely to read only one author, and thus might read my stuff, too (if you think there’s no overlap in my readership or the readership of any Puppy author you might care to name, you are, to put it politely, very likely to be wrong). So, again, as a practical matter, wishing any other author a lack of success would have no benefit to me, while wishing them the best of success might accrue some small and indirect benefit. So there’s that.

As a moral and ethical matter, I do take to heart the adage, usually attributed to Buddha, but reasonable no matter who said it first, that hating someone is like drinking poison and expecting the other person to die. I don’t hate any of the Puppies; I have cause to personally dislike a couple of them, but even then I try not to get to that point of things, either. I posit that the large majority of them are or at least have the capacity to be, decent humans. I disagree with them on many points, and think their current course of action is stupid, wrong, detrimental and childish; I think many of them have behaved poorly, selfishly and in a way that highlights their own insecurities and personal issues; I think it’s sad they try to project those same insecurities and issues on others and use them to justify their own bad actions.

But that doesn’t rise to the level of hate, or actively wishing misfortune on them. I’m mostly sad for them, and occasionally irritated, the latter of which is my problem. And while I’m fine pointing out their bad actions and snarking on their bad logic, what I genuinely hope for them is that they might find a level of success that makes them happy, without the need to view their success through the prism of how their successes stack up to anyone else’s. This whole Puppy mess is because some of them weren’t happy, and were searching externally for that happiness, either by seeking a validation in outside rewards, or by punishing people they saw (erroneously and/or conspiratorially) blocking the path to that validation. Envy and revenge, basically. They’re drinking poison and hoping others die, or at the very least, suffer. It’s why they called themselves “Sad Puppies” in the first place: it was about what they thought their Hugo nominations would make people they decided they didn’t like feel.

Which is their karma. It doesn’t have to be mine (or yours).

So, no. I wish the Puppies success in their publishing endeavors, and I wish them happiness — genuine happiness, not contingent on comparison to, or the suffering of, others. I also wish for them the capacity to recognize success, and to be happy. It doesn’t seem they’re there yet. I hope they get there, and will cheer them if and when they do.

The New York Times has a very interesting long-form list on what happened to each of the first round picks of the 1990 NFL draft; unsurprisingly the stories are varied. Some have gone on to success in their post-NFL career; some have not; and some are in jail or have died. A lot of the success of future years is based in what happens in the early years of a career — but it’s also worth noting that so much is also based on things the players themselves couldn’t directly control (injuries, etc).

As I was reading the list I found myself thinking of the 2006 Campbell Award class, which I suspect in many ways is as close to a “first round draft pick” as the science fiction and fantasy genre gets. The class in my year was me, Brandon Sanderson, Sarah Monette, Chris Roberson, KJ Bishop and Steph Swainston.

And as with the 1990 NFL draft picks, where we are now is all over the board. I and Brandon have been fortunate enough to have consistent, continued success in the genre. Sarah had some struggles commercially, but is now riding a wave of success as Katherine Addison with her terrific novel The Goblin Emperor, which was (without a slate) nominated for the Best Novel Hugo. Chris largely left SF/F but has had a very successful career in comics, with one of his co-creations, iZombie, turned into a successful TV series. KJ appears to have stopped publishing books for a while but returned a couple of years ago with a short story collection. Steph abandoned writing as a career to become a teacher, although there are rumors she may still write more in the future. We’ll see.

Which is the thing that is the difference between the NFL class of ’90 and the Campbell class of ’06: The Class of ’90 is done with football, but the class of ’06 isn’t done with writing, nor is likely to be for the rest of our lives. Where we are now isn’t where we will be a decade from now, or a decade after that (or a decade after that!). Provided we stay this side of the grave, there is lots of time for new successes, new failures, new disappointments and new triumphs, and new adventures. Writing careers can be long, and can take place in and around many other aspects of life.

I’m looking forward to seeing where the Campbell ’06 class goes from here, and what we’ll each do next.