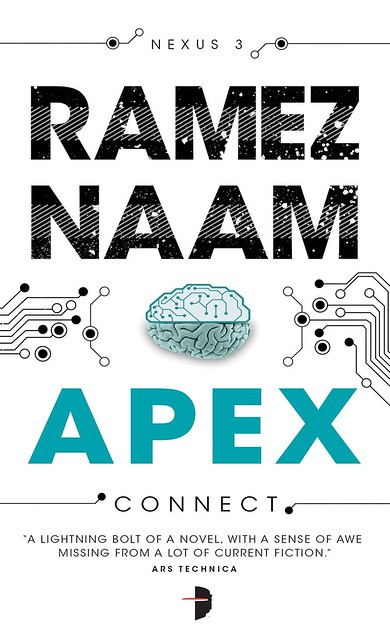 Very quickly, Ramez Naam has become a name to be reckoned with in science fiction, with a series of near-future novels that question reality — or what we use to perceive it, and how that can be manipulated. Apex, the final book in Naam’s Nexus trilogy, is out now, and Naam is here to explain how it interacts with his previous novels — and where it takes us from there.

Apex is the third and final of my Nexus novels, concluding the trilogy started with Nexus and Crux.

The science at the heart of the books has been consistent. Nexus introduced a technology – packaged as a drug – that could link human brains, with their senses, thoughts, and emotions, across short distances or eventually across the net. That technology brought awesome potential to increase human communication and human innovation – or to be used for mind control, assassination, or political subversion. Swallow a dose and connect, if you dare.

The big idea at the heart of Nexus was a question of freedom and control. Who gets to decided whether you can put such a technology in your brain? Who gets to decide whether scientists can make advances in such technologies? What happens when the War on Drugs and the War on Terror smash into a promising technology that looks like a drug, that’s used as a drug, and that’s similar to other technologies abused by criminals and terrorists? That tension – and the very cool science – drove the book from San Francisco to the back streets of Bangkok; Shanghai and Washington DC to Buddhist monasteries in the mountains of Thailand and more.

Crux personalized that idea to one of consequences and responsibility. When you’ve built something that has a huge positive impact, but you find that it is, in fact, being abused, where does one’s responsibility end? How far would you go to stop the problems? What lines would you cross? Or, how far would you go to use the power that creating such a technology has given you, to make the world a better place, even if that meant crossing far more lines?

Apex is the end. And the big idea is now larger. In a world where people have been lied to by the powers above them, where they’ve had their freedoms curtailed, what happens when a radical new technology is inserted? What happens when all the hopes, and joys, and tools, and rage of humanity can be transmitted from mind to mind, even more intimately than the web allows us to do today?

Reading Nexus and Crux, people have commented to me on the linkage to the NSA spying programs that were revealed by Edward Snowden. I must say, that was accidental. I wrote those books before Edward Snowden ever stepped forward. But the War on Drugs and the War on Terror, and the ratcheting up of both surveillance and restriction in an attempt to protect people – even at the cost of their freedom – was very much on my mind.

In Apex the influences are more direct. From the Arab Spring, to Ukrainian uprisings that brought down a government, to environmental protests in China; from Occupy to Ferguson and now Baltimore; the last few years have been marked with protests – protests that are shareable in real-time with pictures, videos, and tweets that make it almost like being there. The real-time ability to share what we see, hear, and think is amplifying global protest movements. And that’s changing the world.

How much further would that go in a world where nearly-telepathic communication via a technology like Nexus existed? Would that be good? Would that be bad? Would the ability to actually experience someone else’s emotions, their life, and what they’ve been through fan the flames of protests? Could it bring more understanding, instead? Could groups of thousands or hundreds of thousands of neurally–linked protesters stay cohesive? Could they stay peaceful? Would they turn to riots? How would governments react? Can governments even survive such a world?

To ask such a question, I couldn’t restrict it to the United States. A lot of the action in Apex takes place on American soil. But just as much occurs in China, where technology is a double-edged sword when it comes to freedom, and nearly as much in India, the rising superpower we tend to forget. When technology smashes into society, the impact is global. And if protesters around the world are seeing their experiences and emotions go viral, directly from mind to mind, would something like the Arab Spring turn into a much more explosive Global Spring?

Those are some of the questions that fascinated me. The result, I’m told, is the most explosive of the Nexus novels so far. It’s also one that’s also shot through with the other questions the books have wrestled with: What defines the boundaries of human? Should we stop people from pushing farther?

And, looming in the background of all of these books until now: How will humanity react when it eventually comes face-to-face with a new generation, perhaps even a new species, with abilities that radically surpass our own? How should we?

I had a heck of a good time writing these books. I hope you enjoy them.