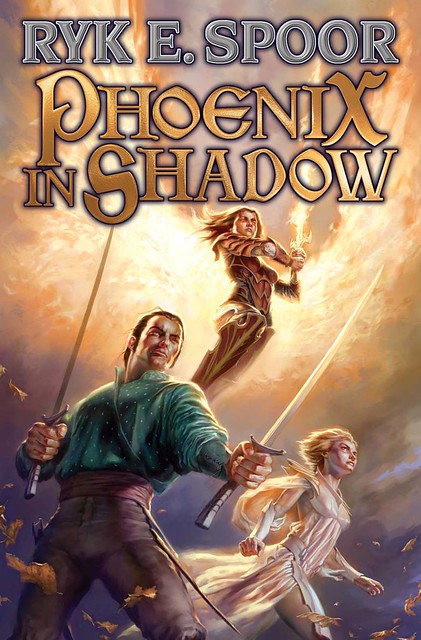 Writers, rejoice! Ryk E. Spoor has solved the Second Novel in a Trilogy problem! What soloution does he apply, and how did he apply it to his novel Phoenix in Shadow? The answers are below.

All of my books came with their own unique challenges; Grand Central Arena was supposed to capture the old-era “sensawunda” while somehow staying in the modern sensibility, and then its sequel Spheres of Influence had to live up to its predecessor; the Boundary trilogy had all the restrictions of hard SF to address, plus the not-insignificant challenges of collaboration with a much more experienced author; and of course my self-published Oz-based novel Polychrome had the physical challenges of getting published at all.

But in some ways, Phoenix in Shadow, second in the Balanced Sword trilogy, presented one of the most daunting challenges of all. Like many epic fantasies, the Balanced Sword is really a single long story told in three novels, and anyone who’s read (or watched) any number of trilogies knows that there is a major problem with most second installments: they cannot resolve the major conflict, and in fact are supposed to continue building tension, and creating challenges, for the main characters. They’re not really even expected to have resolutions; more like cliffhangers, really; the middle’s there to bridge the gap between beginning and end. Frodo and Sam are stuck in Cirith Ungol and everything else is sort of hanging fire at the end of The Two Towers; Han Solo’s frozen and kidnapped, Luke’s lost his hand, and the Empire’s pretty much on top in The Empire Strikes Back; and so on.

I personally hate that. I like my heroes to get some kind of victory in every book. Yet I obviously couldn’t have the real plot of the Balanced Sword resolved at this point.

But I did have one saving grace: there was another major character with a separate quest. Tobimar Silverun, searching for his people’s lost homeland. When I originally worked out the plotline for what became the Balanced Sword, I didn’t know who would be with Kyri on her quest; Tobimar was one of several possibilities. Once I decided on him, I realized that the mysterious “Moonshade Hollow” was a perfect candidate for the lost homeland (I’d had a few other possibilities, but once he was linked to Kyri and Evanwyl, this one leapt out at me).

So there was this tantalizing possible way out of the Middle-Trilogy Trap: resolve Tobimar’s plot, in a suitably dramatic way, if I could show how that connected to Kyri’s mission; this would allow a real victory for the heroes, give them progress towards unraveling the main mystery, and still have plenty left for the final volume.

I also decided to completely discard a secondary plot I’d originally planned out – one in which we would follow Kyri’s Aunt Victoria and King Toron as they dealt with the invasion of Zarathan by the King of All Hells. I realized that this side plot split the focus of the novel; while it was very tempting to show some of that war directly to the readers, this would be taking up chapters of the novel with characters we hadn’t really gotten to know fighting battles that wouldn’t have any direct bearing on the main plot. It was a bit painful, but I knew once I thought about it that it was the right decision: I had to focus on Kyri, Tobimar, Poplock, and their personal adversaries, and let the rest of the world take care of itself.

I’d always had a vague idea of what Moonshade Hollow was like – a corrupted wilderness, yes, but there had to be people living there, too. Originally I envisioned a sort of grim fantasyland, something like the faux-Gothic villages of Hammer films or the Ravenloft setting of D&D (not surprisingly, as Kyri herself had originated in a Ravenloft-based campaign run by Jeff Getzin many years ago). I sketched out the interior, started figuring out details.

(SPOILERS coming! If you want to read Phoenix in Shadow without being at all spoiled, you probably don’t want to read farther!)

With Tobimar’s quest present, I immediately knew there had to be a link to his background – the “Seven Stars and Single Sun”, which quickly translated to a total of eight cities. Originally I envisioned a sort of spiral through this dark land, with them getting more and more evidence of some dark force running things, and an eventual confrontation with the demonlord Kalshae, who was trying to make use of the lost artifacts of Terian that were part of Tobimar’s heritage.

But I wasn’t satisfied with this; it was too simple. Kyri’s people knew dark and evil things came out of Rivendream Pass, from Moonshade Hollow, so everyone – readers and characters alike – would expect some monstrous dark realm. Dark and tragic gothic-y realms have been done to death in fiction.

So I thought: What if it wasn’t dark at all?

As soon as I thought that, it was obvious; the eight artifacts of Terian, one of the greatest of the gods of good on Zarathan, would fight any corruption in their area, provide safe havens for the humans left there, allow them to resist being corrupted themselves, and perhaps even allow them to rebuild a civilization. The dark forces that had caused that fall would perhaps try to guide that civilization’s development, but they couldn’t ignore the power of one of the greatest of the gods. The question then became what that civilization, and that place, would really be like.

The answer came from my son Christopher. He had recently become a fan of the Touhou series, mostly through the fan art, and he showed me the fan-produced animations “Memories of Phantasm.” As soon as I saw the images of Gensokyo, a shining land of beauty, and the innocent-looking inhabitants with godlike powers, I knew this was the kind of image I needed. Kaizatenzei, the Unity of Seven Lights, was born.

This would not be just a safe haven within evil; it would be a shining refuge, a perfect paradise, a place that would leave the heroes wondering from whence came the evil outside its walls, and where their true enemies could be, and because I knew how magic works I realized instantly that this would allow those enemies to remain well hidden. In addition, all of that deific power within the Stars and Sun would give them a suitably lofty goal to aspire to: the corruption and theft of the power of Terian itself. The demonlord Emirinovas emerged as a second major player, and I realized that there was a potential for considerable character progression with her present.

I had two last problems: first, where was all the corrupt power that warped the surrounding forest and Rivendream Pass coming from? The demons running the show would be hiding theirs, not releasing it to be wasted on the landscape outside. But what could possibly be powerful enough, huge enough, to corrupt an entire valley –

And I knew the perfect answer. There was the… worm, so to speak, in the apple of the whole valley, and the real final adversary they’d have to face. This also addressed my preference for dramatics; the final conflict of a book needs not just buildup, but sufficient complexity in the dénouement that it lasts a while – in general, several cycles of conflict, reversal, and triumph to give the reader a more satisfying end. Thus at the end of Phoenix Rising the final combat really starts with Kyri’s unexpected capture by Thornfalcon, then goes through cycles of hope and danger with Tobimar’s arrival, near-murder, Kyri’s escape and intervention, Thornfalcon’s death, the unleashing of the horde, the heroes nearly being overwhelmed, Xavier’s nick-of-time arrival, and the final destruction of the gateway of the monsters – and then, after an interlude, the confrontation with the remaining Justiciars at the Temple of Myrionar.

I now had a three-layered set of enemies, all of whom would have to be defeated in turn: the demons who thought they were running the show, the apparent servant of the demons who was actually running the show behind the scenes (and who had been the supplier of Thornfalcon’s monsters), and the source of corruption which had been sealed away by both.

More, as I developed this, I had a new place worth seeing, something that would make the journey to that battle one worth traveling, and new scenes came to life in my head – especially ones highlighting the character that most readers seemed to like best, the little Toad, Poplock Duckweed. Most importantly, I had a suitable climax to the second book… and the true Big Bad of the trilogy still waiting for the final showdown in Phoenix Ascendant.

I think that with all this, I’ve managed to evade the curse of the middle-of-trilogy. I hope readers will agree, because I want them to enjoy the journey as much as the conclusion!