I just came back from New York City, which was lovely to visit, and I will be back at the end of the month to do two events at Book Expo America. One of them will be open to the general public; the other will be at BEA proper. The one open to the general public involves current Nebula, Locus and Hugo Award nominee Cixun Liu? Curious? You should be!

Tor Books has published quality science fiction and fantasy for thirty-five years by some of the biggest names in genre today! But the Orson Scott Cards and Brandon Sandersons were once new authors themselves. Meet this year’s crop of debut authors and see what makes them tick in a rousing game of “Would You Rather: The SFF Edition” with host, John Scalzi (The End of All Things) and featuring: Ilana C. Myer (Last Song Before Night), Seth Dickinson (The Traitor Baru Cormorant), Lawrence M. Schoen (Barsk: The Elephant’s Graveyard), and Fran Wilde (Updraft).

Nifty. And right after I’m done with my Thursday panel, I hop onto a plane to Charlotte, North Carolina, where I am Author Guest of Honor for ConCarolinas. Other guests of honor include MST3K’s Joel Hodgson, Nebula Award-winner Catherine Asaro and artists Matt Busch and Lin Zy, plus there will be lots of other awesome guests. If you’re in the vicinity — or even if you’re not — this should be a convention worth attending. Come on down.

Also: New addition to my appearances: I’ll be in Berekely on June 6th for the inaugural Bay Area Book Festival. I’ll be doing a reading/Q&A and a panel on the future and climate change, with Paolo Bacigalupi (The Water Knife), Edan Lepucki (California) and Antti Tuomainen (The Healer). The festival is free, although you may need to RSVP for specific events. Check the site for details.

Also also: We’re in the very beginning stages of scheduling the book tour for End of All Things. More details on that when we figure things out.

And that’s me and my (public) travels for the next month. 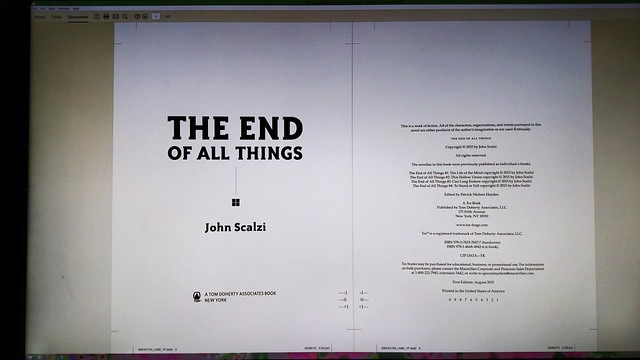 All formatted and ready to be poured into book form (presuming I don’t find big honkin’ errors in the text, which is why it’s been sent to me in the first place). 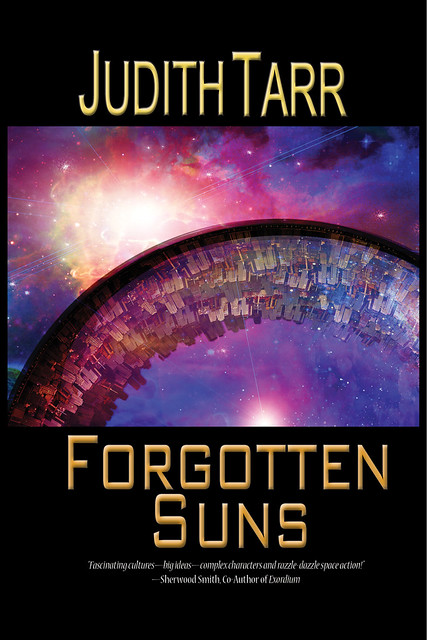 The revolution in publishing that’s happened in the last few years has shaken up things, in ways that are sometimes good, and sometimes bad. But as Judith Tarr tells it, in a very significant way the shake allowed her to tell, in Forgotten Suns, a tale she’s always wanted to tell — how she wanted to tell it.

Some writers start their worldbuilding early. Whatever the inspiration—gaming, fairy tales, Tolkien, favorite authors and worlds, their own imagination—they begin as kids or teens or young adults, and the structures of their personal universe build and build until at some point they burst out in publishable form.

We can go all the way back to the Brontë siblings’ Gondal, and all the way forward to the likes of Joy Chant and Sherwood Smith. Tolkien not only inspired generations of fantasy works and worlds; he created his own over a long lifetime and in obsessive detail.

I first started building a world a year or two before I discovered Tolkien. I’d been reading science fiction for years: all the Golden Agers, James Schmitz, Alan E. Nourse, Asimov-Clarke-Heinlein of course, basically every volume on the science-fiction shelves at my small-town public library (a couple of towns over from Stephen King, who seems to have been doing the same thing). Andre Norton’s Moon of Three Rings enthralled me. Magic and spaceships in the same book, and humans turning into animals and then back again, and alien cultures and alien life forms and that whole sensawunda thing—I couldn’t get enough of it.

So here I was, larval writer, chewing my way through anything and everything that tasted even remotely good, and spinning it out in teeny-tiny handwritten scribbles on purloined notebook paper, narrow rule, two lines per ruled line and four or five at the top (ah, young eyes!). It wasn’t Tolkienian at all; it was Nortonesque and space-opera-esque. It had a starfaring empire and wandering singers and byzantine (for a tweenaged kid) politics and family drama on a grand, indeed operatic scale. There was a whole army of nondead kings; I didn’t know anything about the Chinese terracotta warriors, but if I had, I would have fist-bumped old Qin Shi Huang. He got it right. Except mine were alive (eventually) and had a terrible lot to say.

Then because I could, I genderflipped the protagonist, to see what would happen. This was like 1967; nobody even knew what genderflipping was. I changed all the “he” to “she,” stood back and said, “Whoa.” And it was weird, in the very gendered, very sexist Sixties, but I liked it.

There weren’t any white people, either. One of the characters was an albino (with the vision problems that go with it), but everybody else came in colors, the darker the better. Except one of the main characters had red hair, because Drama. But otherwise he looked, basically, Tibetan.

When I finally decided to come out as a writer, I shopped this thing around. It was epic, some 987 space-and-half typed pages in 10-point Courier, painstakingly transcribed on my high-school-graduation Smith-Corona. Editors passed, of course, but Lester del Rey wrote back, three whole pages, explaining what I’d done right, but also why he wasn’t going to buy it. I’d managed to straddle the line between fantasy and science fiction, and that, he said, wouldn’t fly in the marketplace. Too much fantasy for the science-fiction readers, but too much science fiction to sell as fantasy.

After a round of editorial no-thankses I tried the agent route, and the agent who took me on said much the same—then glommed on to a little thing was I playing with for amusement, about a monk who couldn’t age or die, and King Richard the Lionheart. And that was both fully categorizable and not quite like anything else out there (though R.A. McAvoy was shopping her medieval fantasy at the same time, and Katherine Kurtz had risen to stardom with her Deryni books); so I was encouraged to pursue that, and my “first” novel was historical fantasy instead of unclassifiable space adventure.

But I still loved that world and wanted to keep writing in it. So I thought, hey, there are millennia of history in this universe. Why not go back to the Bronze Age and write the origin story, base it on my favorite ancient epic hero, Alexander the Great (Mary Renault: another of my heart-and-soul authors)—and sell it as epic fantasy. Which I did, and my agent did, and nobody was the wiser.

But I’d always worldbuilt with a science-fictional slant; my “elves” owed far more to the X-Men than to Tolkien. If I was playing with ancient history, I was also, in my head, plotting all the way into space and beyond. The market wouldn’t let me do anything about it, but it was still there.

Then publishing went down with the rest of the economic ship, and I was in steerage, so I sank with it. But ebooks had become a thing, crowdfunding was a thing, and I clawed my way to the air and realized…

I could write anything I damned well wanted.

I could write that space opera. I could set it on that world, in that universe. I could roll all those nondead opinionated kings into one highly opinionated individual, more or less credibly explain the how and why, and meanwhile, science had discovered the multiverse and psi powers were out of vogue but did I care? I could do whatever I wanted. I could even intersect the imaginary world and the more or less real extrapolated Earth of a thousand years or so in the future, with space travel and colonization and what the hell, evil Psycorps (thank you, Babylon-5) and financially strapped archaeologists and my favorite space-opera construct, the space whale or sentient starship (we love you, Moya, and commemorate you). There could even be real opera, and my head was giving me its own sound track for that; some of it made it into the book, and twisted the plot in oh so twisty ways in the process.

The whole point was to go wild in my own personal universe, but make it work as a long-form fiction. To have one whole hell of a lot of fun, in short, and rock that whole straddle-the-genres thing. Stop hiding from it or apologizing for it, and own it. Bloody-handed Bronze Age warlord, evil (and not so evil) psi masters, parallel universes, space whales, stargates (I had them first!), lost-world mysteries, and all.