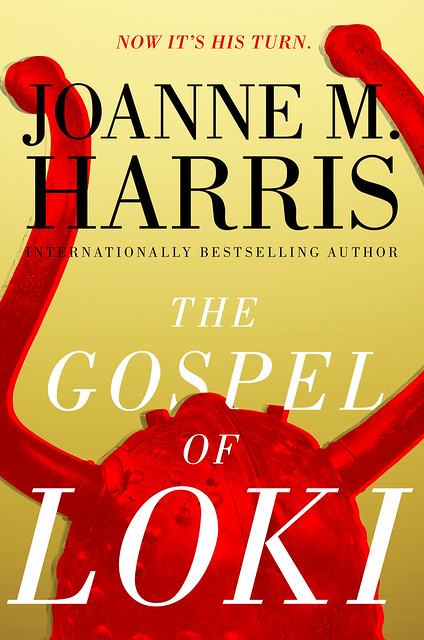 Things change, but people often stay the same. This may or may not be a good thing for the gods who meddle in the affairs of mortals. But, as Joanne M. Harris explains regarding her novel The Gospel of Loki, it can present an opportunity… for a god of, shall we say, flexible morality.

Ever since mankind began to look to the heavens and speculate on how and why we came to be, there have been creation myths and stories of an apocalypse. Almost all myths and religions share this vision of an ephemeral world at the mercy of powerful gods wielding the might of the elements, and of a day of judgement, when the gods and their enemies will finally meet in battle.

Of course, a myth is just a religion that has fallen into disrepute. A god who loses his followers can no longer be a god, and his fate is usually to be relegated to the mythology shelves as other beliefs take over. Such has been the fate of the Norse gods, once revered across Northern Europe and Scandinavia. Their influence, however, remains. For centuries, artists, writers and composers from Wagner, Tolkien and Tennyson to Marvel Comics have taken inspiration from these tales of conflict, companionship and adventure.

Why? In terms of content, Norse myth is frustratingly limited. The oral tradition has been lost. What has been saved is fragmentary, filled with inconsistencies. Worse, the Christian scholars to whom we owe their survival have added their own impressions; some scornful, some sympathetic, designed to help interpret something they themselves did not fully understand. Even so, the myths remain unusually fresh and immediate. Perhaps because of the characters; accessible, even today, with all their very human flaws, ambitions, fears and relationships.

There’s Odin, the one-eyed leader; solitary, mysterious, isolated from the rest by virtue of his occult knowledge and the burdens of leadership. There’s his son, Thor; strong, loyal, brave (though maybe not too bright). There’s Bragi, the god of music and song, and his gentle wife, Idun, the healer. There’s Heimdall, the watchman; eagle-eyed, suspicious. There’s Týr, the one-armed god of war, and Frey, god of battle and the harvest, with his sister Freyja, the goddess of desires both sacred and profane. A gallery of gods and goddesses, some better-known than others, but all with their distinct personalities and attributes; their personal feuds; their secrets. All living together in Asgard, the sky citadel, which joins onto the world of Men by a bridge in the form of a rainbow.

This living in such close proximity makes for frequent clashes between the gods. Power-struggles between factions; conflicts between fathers and sons; flaring sexual chemistries. And to cap it all, there’s a traitor on board; Loki, the trickster in the camp, an alien brought into Asgard for mysterious reasons of his own by Odin, who is willing to tolerate his disruptive nature for the sake of his wicked intelligence. The result is pure drama; some comic, some cruel, all wildly entertaining.

It’s a story of tremendous richness, some parts of it recounted in prose, some in verses of bleak and powerful beauty. One of the most famous of these is Völuspá, the Prophecy of the Seeress, which tells the story of the world, from creation onwards, including the rise of the gods of Asgard and predicting their eventual doom – at Ragnarók, the cataclysmic battle in which the gods will face their enemies and lose, and the world will be plunged into darkness and perpetual winter.

And this is where my story begins – after the end of the world. Because although every culture has its own apocalypse myth, the world has always somehow survived, even when the culture has died. As a student of mythology, folklore and religion, I tend to see these stories of creation and apocalypse as part of an expanding tapestry, woven by human beings across the centuries as a means of understanding the universe. Our stories, like our civilizations, come in cycles of expansion and decline, like the seasons of the year, ending in the promise of rebirth and new beginnings. And looking at our history, with its dark ages, its terrible wars, its fallen kings, forgotten gods and ruined empires, it’s easy to see, with hindsight, that what may have once seemed like the end of the world was only the end of another cycle.

This is perhaps the central idea in The Gospel of Loki. Ragnarók has come and gone, if not quite as literally as the Seeress predicted. Odin and his entourage have been deposed in favour of new gods, new religions. And yet human nature has not changed as much. We still have the same fundamental concerns. We look to the skies with anxiety. We’re not afraid of demon wolves swallowing the sun and moon, but we are conscious of pollution, and smog, and of the hole in the ozone layer. The monsters we see destroying the world are not frost-giants, but giant corporations.

And in this changing world, Loki, of all the gods, has adapted to suit the changing times, and survives to tell his own story, in his own words, from the beginning of the Worlds to Ragnarók. That he should have survived his own death is perhaps not so surprising: after all, he is a very modern antihero. His sense of alienation; his revolt against authority; his refusal to conform; his choice of intelligence over brute force; his gender fluidity (he changes sexes several times, and on one occasion, even gives birth); his almost existential sense of humour – all these things make him, if anything, easier to understand for the modern reader than in the twelfth century.

Loki is always asking questions. Who am I? What am I? Why am I here? What happens if I break the rules? Why does it matter, anyway? In a world striving towards order, Loki was chaos incarnate. Now, in a world growing increasingly chaotic, Loki’s influence, too, has grown. He is no longer the voice of the lonely outsider, but the spokesman of the human condition.

That’s why I chose to give him such a modern idiom – not the language of epic poetry, but that of adolescent protest – and this is why his story remains so relevant to our modern world, not because it’s exactly true (Loki is, after all, the Father of Lies), but because the stories we tell say more about us than we know.