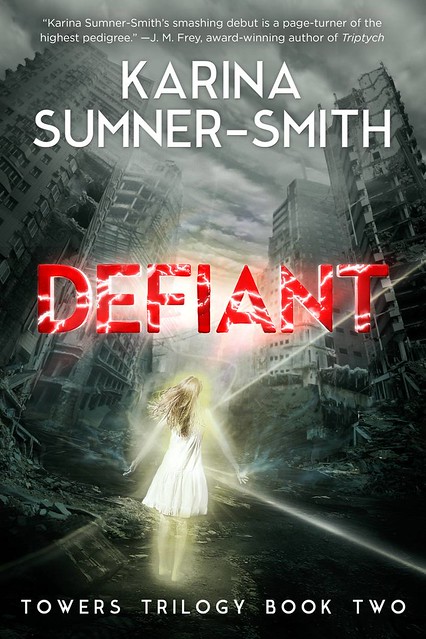 We all wish for that big break, whatever that “big break” might mean — but will that big break cause more problems than it solves? It’s a question that Karina Sumner-Smith considers in Defiant. Here she is to explain how it manifests in the world she’s created.

Imagine you won the lottery.

At one time or another, most of us have imagined what we’d do with that money. Debts eliminated, bills paid without a thought. Buying a house or a car, a bigger house or a better car, a yacht or a new wing for the family mansion with a secret library, a trapdoor, and a bouncy castle. (Or am I alone in that last bit?)

Yet despite the odds against our tickets coming up the big winner, we still dream—because it is, however unlikely, possible. It’s that possibility that keeps people clamoring. It’s hope.

That’s the big idea behind the Towers Trilogy. In this far-future society, magic is everything. A power naturally generated by the human body, magic is used as money and fuel. It heals illness and prolongs life, powers machinery and keeps the lights on, and is a critical part of countless everyday tasks, big and small. The magic-rich reside in living, floating Towers that play out an unending political dance for position and altitude. Yet the people without enough magic end up in the Lower City—a rough, dangerous society that exists in the ruined skyscrapers on the ground.

The first book of the trilogy, Radiant, tells the story of Xhea, a homeless girl in the Lower City who has no magic at all. She can’t buy food or clothing, can’t open doors; she can’t even work the simplest of spells. Then she meets the ghost of a girl who has not died, and everything changes. That ghost, Shai, is a Radiant, a person who generates so much magical energy that her body and soul are used as a power plant—even in death. Despite being very different young women from disparate ends of their society, the two form a bond and fight to free Shai from her fate.

The second novel, Defiant, sees the Lower City’s social structure begin to break down. Because in saving Shai, Xhea brings a source of untold wealth to the poorest of the poor. In effect, the people of the Lower City win the lottery—and that sudden influx of power creates more problems than it solves.

I thought, when I started, that I was writing a fun little cross-genre tale about magic, ghosts, and a friendship between two very different young women caught in strange circumstances. It was only when I was neck-deep in story and paused to look around that I realized that I was, of course, writing about inequality and economic disparity.

Because if affluence is a biological trait, a direct result of your ability to generate magic, then so by extension is poverty. “The value of a person” has a very literal meaning—and cascading consequences for concepts of social class and economic mobility within this constructed world.

Dark concepts, all. Yet I’m also just trying to write a fun, different fantasy with ghosts and magic, war and politics and friendship, bounty hunters and sentient buildings, and strange creatures that stalk the ruined streets when night falls.

These books are also, in the end, about hope. Because when we dream about winning the lottery, we’re looking for a huge, outside force to change our lives for the good—to save us from our circumstances and create possibilities that didn’t exist before. Yet that change can come from the  inside, too. There are a myriad ways to defy the fates that biology and money and societal structures create; and people, working together despite terrible odds, can find ways to save themselves.