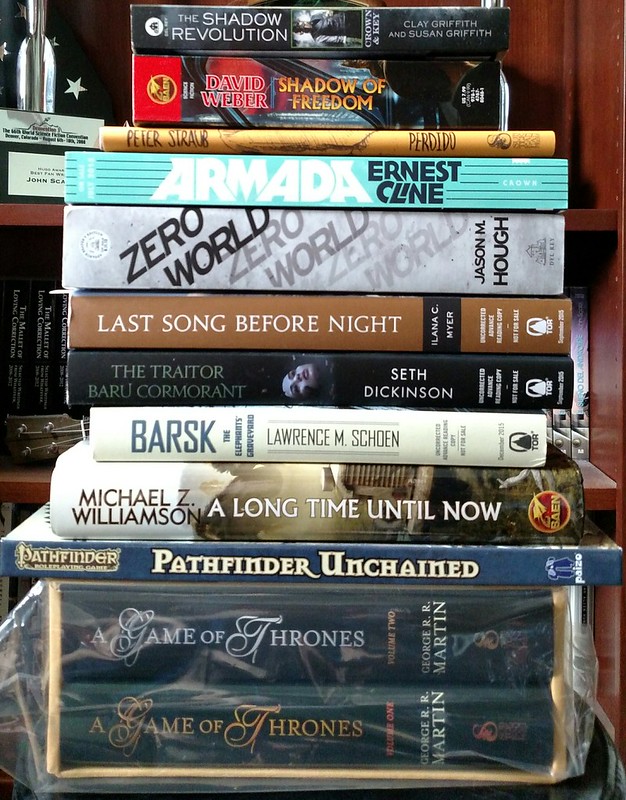 I’m guessing you will find something to like in this stack of new books and ARCs. Am I right? Let me know in the comments!

In a discussion about the current Hugo nonsense taking place elsewhere online, a writer trotted out a variation of the now-utterly-stale opinion that Robert Heinlein couldn’t win a Hugo if he were writing today, this new variation being that not only couldn’t Heinlein win a Hugo, he wouldn’t even be reviewed in Locus, the Science Fiction and Fantasy trade magazine. When challenged on this assertion, the writer said that Locus does not review military SF/space opera, period, so he was comfortable making that assertion.

I’ve punted the “Heinlein couldn’t win a Hugo today” nonsense before, so there’s no point going over that again. But the assertion that Locus doesn’t review milSF/space opera struck me as an odd one to make. As a writer of both military science fiction and space opera — The End of All Things will be both, sometimes simultaneously — I know my books in these subgenres have been reviewed in Locus. One of my favorite reviews of Old Man’s War (by Russell Letson) was in the magazine, and the magazine published a review of The Human Division, the most recent book in the OMW series as well.

But I grant I might be a special case, for various reasons, some more specious than others. Fortunately, I’m a subscriber to Locus (it’s super-useful in keeping up with SF/F publishing, subscribe now!), so this is something I could easily check. So I opened up the latest edition of the magazine, May 2015, and scanned the reviews. And on page 49:

It’s not a long review, but it certainly is a review, complete with a useful pull quote from a publisher PR point of view (“‘Good old-fashioned military science fiction’ — Locus”). So strictly from the point of view of actual fact, the assertion that Locus does not review milSF/space opera is invalidated as recently as the most current issue.

But — it’s possible this was a mistake, that somehow this one slipped past the gatekeepers! Fortunately, there is another way to check this. Locus has helpfully posted an index of its book reviews online; every review from January 1984 through May 2015 (the latter date, I expect, being constantly updated), from the magazine and its associated Web site, which sometimes runs its own reviews. I put the numbers “2014” and “2015” into my browser’s “find” function and then clicked off titles I was pretty confident could be classified as military science fiction and/or space opera. Here’s my (almost certainly incomplete) list after about fifteen minutes of perusal, for books reviewed in the last eighteen months:

And yes, I suppose we could quibble about what actually constitutes “space opera” — as an example, whether Willful Child, meant as an affectionate parody of Star Trek, counts (despite the fact that Star Trek itself is unambiguously space opera). But at the end of the day, it’s difficult to deny that Locus, in fact, does review both space opera and military science fiction. And if you look at the author index, you’ll find no lack of reviews of either subgenre, either in the last few years or indeed in the more than three decades of reviews indexed therein.

Is space opera or milSF reviewed less than other subgenres of science fiction or fantasy? Possibly; someone with more interest and time than I could do the work to find out. From my own cursory glance, and depending how finely you chop the subgenre onion, however, it doesn’t look as if milSF/space opera is notably underrepresented. There is quite a lot of SF/F that gets published, in a lot of increasingly fined-grained subgenres. Locus (or any genre publication, for that matter), has an impossible task in representing the scope of the genre as it exists today. It can’t review everything.

Regardless, the assertion was not that Locus doesn’t publish enough milSF/space opera reviews; it was that it doesn’t publish any. That’s definitively and provably wrong, and easy to disprove.

This is a relatively innocuous example of People Believing Things That Are Manifestly Not True, but it bothers me. If the Puppies (with whom, I wish to be clear, I am not suggesting this particular author belongs or identifies) have taught us anything, it’s that there is a not entirely small group of people out there in science fiction with a rich and deep persecution complex that is unbounded by actual fact. If you’re a writer or reader upset by a lack of representation of your particular subgenre or type of writer, well, fine, but if you’re basing that upset on false premises — for example, that Locus doesn’t review milSF or space opera — then a) you’re getting yourself worked up over nothing, b) should you continue to feel aggrieved after your misapprehension has been pointed out, there are some serious discussions you need to have with yourself.

There’s also c), which is that if you use a false sense of persecution to be resentful and unhappy with other people who you believe to be getting advantages you are not, and then act on that resentment, people will notice. It’s very likely you will be judged accordingly.

All of which is to say: Assertions! Please back them up. Particularly the ones you believe are affecting you. It’s often not difficult, and you may learn something. Whether learning that thing will make you happy is another discussion entirely. But better to know, yes?