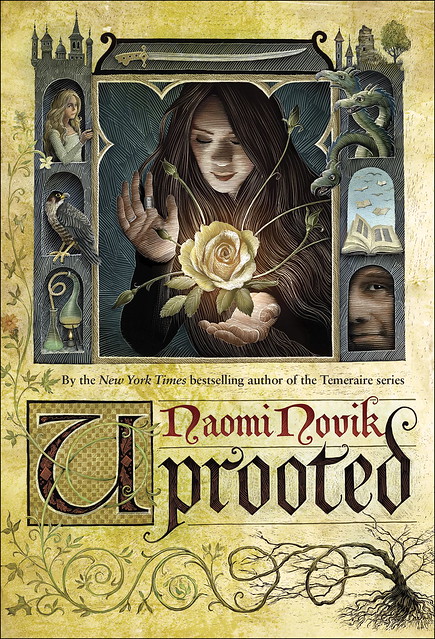 Memory is sometimes a tricky beast, but is that always a bad thing? Naomi Novik has some thoughts on this, and how memories, hazy or otherwise, relate to her latest novel Uprooted.

Here’s a test. Two scenes from movies. Tell me if you remember either of these. (The test is unfairly skewed towards people who were conscious in the eighties, sorry.)

In his underground lair beneath Metropolis, Lex Luthor keeps a nest of monstrous pet lion-alligator things. They mostly sound like lions, but he is living in the sewers of metaphorical New York City, so they clearly should have been alligators. Let’s call them alligators. At the end, he feeds Ms. Teschmacher to the alligators for having betrayed him (Superman rescues her, as comic book movies were not yet inhospitable to ten year olds).

Scene two: in Jabba’s stronghold, after Luke Skywalker has been dropped into the Rancor’s pit, he leaps straight up into the air and catches the grating above that just dumped him down. He dangles from the iron bars as Jabba’s courtiers bash his fingers with weapons, and then drops again to continue fighting.

For years, whenever I attempted to describe the alligators to people, they thought I was out of my mind, but they really do exist, in a pair of deleted scenes edited out of the theatrical release of the movie and included only in a later TV release (for it must be admitted very obscure reasons).

When I describe the scene of Luke jumping for the grating, mostly people have a vague feeling of familiarity. But it doesn’t exist. The moment was described in the novelization but never released, never filmed. I remember it as clearly and vividly as the alligators. I even remember clearly a page out of a photo storybook I had showing the scene, which also doesn’t exist. I spent a long frustrated time trying to track it down before I finally accepted that my brain had just put that scene together and quietly tucked it into my memory like a small deceitful landmine.

I have also forgotten and falsely remembered many other things — stories I myself have written, what my child was like a year ago, the names and faces of good friends. People have told me too often that’s not what happened! how could you forget? I’ve never doubted all those studies about the unreliability of witnesses, because I’ve been made palpably aware of my own unreliability over and over.

But the gift of a strangely terrible memory is to be set free from the tyranny of the correct. I’ve spent a lot of time with young children in the last few years, seen how their brains are still working out the most useful things to hold on to, the lines between the real and the false. “Is Hillary Clinton really alive?” my four year old asks me doubtfully as we watch her declaration of candidacy on the iPad, the same way we watch episodes of Star Trek and Wonder Woman. (A few days later she confidently explains to a group of our friends that a woman named Hillary, who is alive, is going to be president after Barack Obama dies, cheerfully discarding layers of metaphor between U.S. politics and the Hunger Games.)

She has not yet reconciled herself to the frustrating, repeated failures of magic. Neither have I. Making sense of things that don’t quite make sense, we fill in the missing pieces, retelling our own stories and accumulating embellishment along the way. And magic is in those missing pieces. When to remember is to create, to imagine is to make true. Why shouldn’t Mr. Spock be a real person when Hillary Clinton is? Why shouldn’t there be magic, if the past can change out from under us?

Uprooted takes place in a Poland that exists only in my own mind. It grew out of the fairy tales my mother read to me in Polish when I was a child, not older than my own daughter, before I was too old to really believe in forest fairies and mountains of glass. After I was five we stopped speaking the language at home, and I didn’t learn to read it until I was much older. Even now I’m not fluent enough to read the stories by myself without help, but when I plug uncertain words into translation sites, the meanings that come out aren’t the ones I am looking for. The word olbrzymi means enormous, but not to me; in my head it means monstrously overgrown, tangled, terrifying.

But I reject the dictionary entries: they are correct but untrue. I am not just making things up when I tell you a story about a valley of living water and tangled forests, a castle of many towers. I am telling you about a place that I have been. There are many dangers in the unreliability of memory, but in the realm of fiction it opens the possibility for the reader to believe in magic too, to feel it creeping up on them, the faint uneasiness of could that have happened? There’s magic in accepting the gap between physical reality and the shifting electrical sands of our brain cells, and allowing ourselves to visit a real and impossible place.