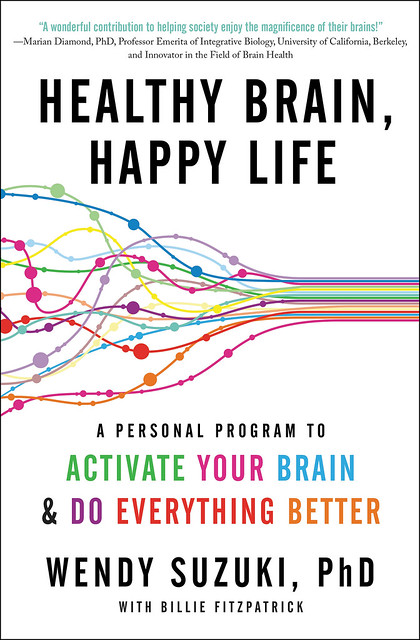 Science says: You have a hypothesis? Test it! And see if the results you get match your hypothesis? Neuroscientist Wendy Suzuki has a hypothesis about the brain, and how certain activities and thoughts can influence them, which she expands upon in her book (written with Billie Fitzpatrick) Healthy Brain, Happy Life. How did this hypothesis come about? From an interesting personal experience.

Can I use my thoughts, intentions and beliefs to change my brain and make myself smarter and happier? That’s the question I have been asking ever since I inadvertently did an experiment on myself and noticed how much aerobic exercise combined with positive intentions transformed not only my body, but my brain and ultimately, my life.

After years of neglecting my body and focusing too much of my energy on my work as a brain scientist, I finally decided to begin a regular exercise routine. I started with a personal trainer and focused on increasing my overall muscular and cardiovascular strength. As I got stronger, I felt great and much more energized.

And then I found a class at the gym that shifted my workout routine into high gear. The class combined physical movements from kickboxing, dance yoga and martial arts with positive spoken affirmations like “I am strong!” or “I believe I will succeed!”. It’s called intenSati. And it’s hard. You have to master the moves and the affirmations that go with them and change moves every four to eight counts or so. Shouting out the affirmations increases the cardio load of the workout and makes it much more challenging than just doing the moves on their own.

I was already in pretty good shape when I discovered this class at my gym. I always felt more energized after any workout. But intenSati was different. After each class, I was full of energy, in a great mood, and felt like I could take on the world. Not only that, when I left the gym after class, I was already looking forward to the next time I could do the workout.

Over time I noticed something even better. As I upped my workouts with intenSati, it became easier to write my scientific grants. I seemed to be able to focus my attention better while writing and make more and better associations or links between the journal articles that I read in support of my points. I realized I had just done an experiment on myself and the results were these striking brain changes.

In fact, the shift was so noticeable that I decided to find out what we knew about the effects of exercise on brain function. I found a vibrant scientific literature focused largely in rodents showing profound effects of exercise on the anatomy, physiology and function of brain areas important for attention, memory and mood. In humans, there was good evidence that exercise improved mood and attention, and promising indirect evidence that exercise improved memory function as well. In my book Healthy Brain, Happy Life, I write about my transformative experiences with exercise, and also about the what neuroscience understands about the dramatic impact of exercise on specific brain areas.

In myself, I noticed improved mood, attention and memory functions with increased levels of aerobic activity. But I realized that with intenSati, I wasn’t doing just exercise alone – I was combining it with positive affirmations. And I wondered if the exercise alone that was causing the brain effects I was experiencing? Or could it be the combination of exercise together with the positive affirmations that was doing the trick? As a scientist, I knew I could not answer this question simply by introspection. Instead I went to the scientific literature to see if there were any studies on the brain effects of combining of exercise and affirmations, something I started to call “intentional exercise”.

Somehow that didn’t seem quite right. Then, I stumbled upon the psychological studies of something called mindset, defined as the established set of attitudes held by somebody. This is a hot area of research because of exciting findings showing that shifting a person’s mindset by simply providing information can have significant changes on people’s sensory experiences and physiological responses.

What does this mean? My two favorite examples from this area of study were done by Professor Alia Crum of Stanford’s Psychology department. In one study, she showed that people who thought they were drinking an indulgent high calorie milkshake showed faster declines in a hunger-inducing hormone than when they thought the same exact milkshake was healthy and low calorie. In another study, she showed that when hotel room attendants were told that, according to the surgeon general, their workload of cleaning rooms and changing sheets was considered a good amount of exercise, the workers lost significant weight and had lower blood pressure compared to the control group of hotel room attendants who were not given that information.

We don’t know the answer to these questions right now. But my “big idea” is that we can test these hypotheses systematically and scientifically in the lab. It could be that adding positive intention to exercise (any kind of exercise), could be the secret sauce needed to boost the effects of exercise on both our bodies and our brains to their maximum levels. That’s exactly the question I’m starting to answer with the experiments I’m doing in my lab.

← A Useful Moment From a Mentor
The End of All Things: Starred Review at Kirkus →