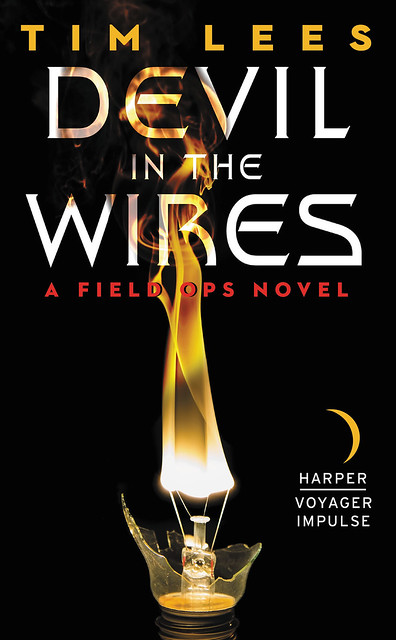 The good news: In his novel Devil in the Wires, author Tim Lees has solved our energy crisis! The bad news… well, let’s just say that you’re the sort to blaspheme, your electricity might flicker a bit in protest. Here’s Lees to explain it further.

You don’t have to be religious to feel a sense of awe when you stand in some big temple or cathedral, especially if it’s old, or built on the site of a still older shrine, as many are. Places of worship can date back millennia, and through more than one faith. Sacred sites are sacred for a reason. Whatever they may now be, once upon a time, they were home to strange, inhuman forces – beings which, for want of a better term, we might call “gods.”

From the ancient, to the modern. We all know about the energy crisis. Fossil fuels are running out, alternative energy supplies – we’re told – will never match the shortfall.

It’s a grim scenario. But what if there was something else, a source of power till now almost untapped? What if you could mine the psychic energy stored in churches, shrines and other sacred places? Energy built up through years of worship, prayer and entreaty – what if you could take that and convert it into usable electric power?

Well, that’s the first Big Idea. Those gods are still there. They’re what gets turned into electric power. They’re what lights our cities, cooks our meals, powers our Playstations and TVs. Ancient gods: the latest source of fuel.

I love mash-ups. Genre-wise, ramming together two totally disparate elements (and making them work) is just about my favorite activity. Back when I still had musical ambitions, I was once asked for a keyboard solo on a reggae track. I looked at the range of sounds available and thought, Ah-ha! Church organ! Why not? Nothing, of course, could have been less appropriate, which was exactly why I chose it. To me, it sounded great. To everybody else… well. Let’s just say there was no subsequent boom in church organ reggae, and I am now a writer, not a musician.

So, with Devil in the Wires, I’ve taken an element from genre fantasy – the kind of gods that Conan or Elric were always running into – and kicked it into the present day. Needless to say, the gods have undergone some changes in the process. They are still genii loci – spirits of place – and repositories of immense power, but for the most part (and with one exception) they’re a lot less humanized, a lot more alien. To stand before them can be a bit like suffering a seriously bad acid trip. Simply to perceive them can be dangerous. As for actually collecting them, that’s the sort of job which requires a specialist. Not just for specialized equipment, but also for a special frame of mind.

Enter Big Idea number two: Chris Copeland, professional god hunter, already worried he’s been in the job too long, and his luck (much like those fossil fuels) might soon be running out.

Have you ever wondered how the guys in fantasy stories make their cash? How they pay the rent? Batman, supposedly, runs a multi-billion dollar business empire, and still stays out all night crime-fighting. (Really?) Indiana Jones works at a university which requires neither the grading of papers nor writing of research publications, nor, presumably, returning from the wilds in time for class. Great fun, but I wanted something I could actually believe, and a counterpoint to the massive, numinous forces at work throughout so much of the book.

I mentioned mash-ups. There’s the concept of burning gods for energy – pure fantasy. So to ground it all, I thought I’d put it in a context so familiar everyone can recognize it: the daily grind of company drudge work.

Chris works for the Registry. It’s a business. It’s secretive, but it’s not the secret service. It’s not some underground cabal. It’s the kind of place where you or I might work, though hopefully in a different capacity. And Chris is an employee. He has paperwork to file. He has bosses he doesn’t trust. Like most people on the ground floor of a business, he often has a better idea what’s going on than his managers do. And that’s the source of much of the humor in the book. Because humor is the way we survive, it’s the thing that gets us through our day-jobs, especially if our day-jobs might just threaten our health, our sanity, and our lives.

One final matter. I’m a Brit, now resident in the US. Devil in the Wires starts in Iraq, makes a couple of stops in Paris and London, then races on to Chicago, where I’ve lived the last few years. Here’s a thing about us SF/fantasy types: we never feel at home in a place until we’ve smashed it, shattered it, invaded it with aliens, sent monsters roaring through its streets and exposed its seedy, supernatural underbelly to the world. Now, at last, I give Chicago what it needs: an ancient god, a crazy scheme for powering a city, three or four assorted killers, and a hero who’s torn between earning a crust and doing the right thing (no prizes for guessing which side he comes down on).

Believe me: it’s an act of love.

← How You Should Vote for the Hugos This Year
School’s Out for Summer, 2015 Edition →