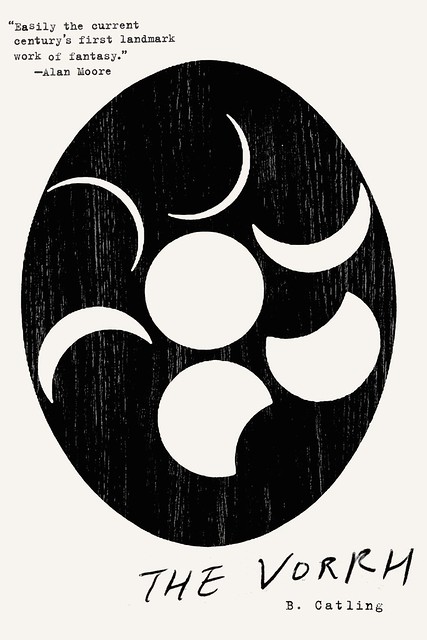 In describing how The Vorrh came out of him, author Brian Catling pretty accurately makes a point about creation that I think many creative people can agree with — before it comes out, there’s so much that has to go on inside.

I have answered more identical questions about The Vorrh than anything else in my life. The core ones being about its origins and the process of its construction. When I explain that it was probably brewing for thirty years and that once it escaped it wrote me, then the problems begin, especially as I have not stopped writing since it was finished. Words like channelled and cathartic appear in other people’s mouths. So I did what I know best, I consulted perversity and made something else.  Made it out of lead, glass, Perspex and electrical motors, transparent piping, feather quills, wiring and pumps. An extension of my hand, tiny eccentric engines giving the tip of each finger a life of its own, eerie and totally against anatomical grace and favour. Instead of blood the quills and their nibs are pumped with warm water and compressed black ink. When it ‘goes off’ it surges and gushes, staining the room and its operator’s disability with saturated steaming shadows. I did not know it was literal until it was finished and switched on.

There is another tale of loose hands that I wrote in a grim poetic series many years before. Hands running through the back alleys and murder yards of Whitechapel, scratching sparks and gouges from the wet walls with hooked nails, fleeing, forcing themselves into flesh and infamy. I think they also wrote a true channel for The Vorrh to play, like a needle on black shining disk.

I always had the title, the opening scene and the conclusion and once the work finally began to turn, I had to invent everything else in-between. A wonderful savage awakening that had nothing to do with mapped out plot, or carefully observed character. I became each personality and principle in the book. Living equally the events of each man, demon, woman, monster and ghost. Each writing themselves visually. Without a pennyweight of the critical skills, or a daub of the doubt. A necessary blindness to let the mystery and the presence of The Vorrh overwhelm me. In all modesty, I thought I was writing a slender obscure surrealistic work that would hopefully exist in the sacred margins of esoteric imagination. What arrived was quite different. An enormous birth without a shadow of pain.

The Vorrh is the vast African forest that Raymond Roussell invited in his masterpiece of surrealism, Impressions of Africa. He never much cared for its detail and used it only as a painted backdrop. I have put aside my reverence and dragged him screaming into the depth of this new Vorrh, along with several other ‘actuals’, such as Edweard Muybridge. The Vorrh is the first book in a trilogy, with the unwanted forth already remotely clawing at the inside of my skull, like another disembodied hand.

← It’s Been Nearly Three Weeks Since a Cat Picture Here and That’s Just Wrong
Updates and Reminders and Cryptic Pronouncements, 5/22/15 →