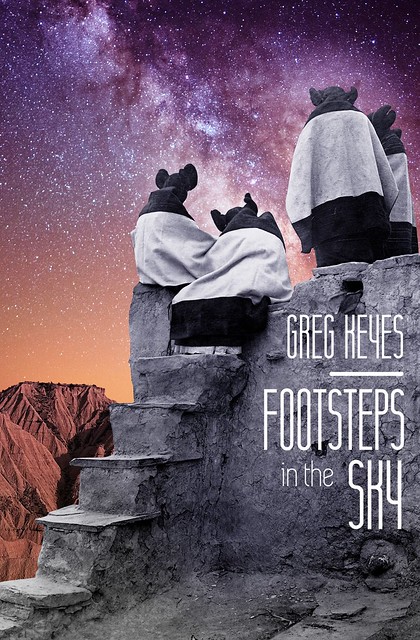 How many worlds must a people travel before they are at peace with themselves? Greg Keyes asked himself this question while writing Footsteps in the Sky, and the answer takes us back to our world, and his studies in graduate school.

Once, at a book fair in Belgium, I was asked what purpose science fiction and fantasy should serve. Put on the spot, I somewhat glibly replied that science fiction helps us imagine the future, and fantasy helps us decide what is relevant to bring with us from the past. By that (flawed) definition, Footsteps in the Sky is fantasy, because the central questions are how, why, and in what form belief is transmitted through and affected by time, technology, and social change.

When I wrote Footsteps, I was a graduate student in Anthropology, and I was writing a thesis detailing the change in belief and mythology of the native peoples of the Southeastern U.S.—the peoples now known and Choctaw, Chickasaw, Creek, Cherokee—over a nearly 500-year span. The first century of that period saw an enormous demographic and social collapse due to the introduction of European diseases, followed by centuries of natives being victims of and participants in slaving, warfare, and a trade system that left them dependent on European powers for weapons and other commodities. Eventually, most were removed from their homelands entirely. A few tribes—such as the Apalachee—were exterminated.

Not surprisingly, their belief systems underwent a significant amount of restructuring over the centuries. For instance, they stopped telling stories about hereditary elites being descended from the gods, because hereditary elites were long gone. Yet certain elements of belief remained consistent for a very long time, even in the face of considerable social stress. The stories of their ancestors weren’t so much abandoned as adapted to changing circumstances.

That’s part one of what was happening in my life when I wrote Footsteps. Part two is that I was also involved in a Choctaw game called kapucha toli, a relative of lacrosse. I played on a Choctaw team, but I also started a club at the University of Georgia, which in turn brought me into the world of the Pow Wow festivals where we were often asked to play exhibition games. In that subculture, there existed a good bit of tension between people who were unquestionably Native Americans—genetically and culturally—and those who were seen as “playing Indian” or Wannabees. The latter of which, my team, the Flying Rats, was often seen as belonging to. To curb this perception, we added “Naholo” to our team name, which is the Choctaw word for a white person. We wanted to be clear that we just wanted to play the sport.

Others, however, were trying to do much more. I met and associated with certain people who were desperately trying to “rediscover” their lost heritage or “recreate” a pre-European religion and way of life.

Here, my academic studies and my personal experiences collided, and from that pileup emerged my Big Idea. I thought there was a story there, about a group of people who manage to isolate themselves on a remote planet so they can return to a past way of life. I imagined that at least some of the grandchildren of those people would be pretty pissed off at being stuck on a barely habitable rock because of their ancestors’ good intentions.

I tried using the Choctaw first, since it was that culture and those beliefs I was most intimate with.  It was probably for that reason that I couldn’t make it work. I was too close to it, and I just couldn’t see my way in. Another problem was that returning to pre-Columbian way of life for the natives of the Southeast would mean reverting to powerful chiefdoms ruled by divine elites. This sort of culture would probably not be the best fit for a story about terraforming.

And then I remembered the Hopi.

When I was a child, my father took a job in the Navajo Nation, so at an early age I became fascinated with southwestern cultures. The Hopi, in particular, with their baroque pantheon of gods and spirits, captivated me. It dawned on me that the Hopi were perfect for what I had in mind because they believe that they have already lived on four different worlds.

In the First World, they weren’t human, but rather insect-like creatures who quarreled a lot. The creator realized he had botched the job in making them, so he sent Spider Woman to lead them to the Second World. On the journey, they transformed into creatures with fur, webbed fingers, and tails. Things went well for a while, but they began to fight again, and the creator saw they still didn’t have an understanding of how to live properly.

So he made a third world, and on the journey there, the creatures became human. They built villages, farmed corn, and at first had good lives. But some of these people became sorcerers and two-hearts, and eventually corruption and evil became overwhelming. Once again, the people began to look for a place to start over. They found refuge in the Fourth World, ruled by Masaw, the god of death. It was a cold, hard place that they would have to work at to make livable, but they set themselves to the task because they wanted to live proper lives.

So here was a story that had transformation built into it already, which, in essence, harmonized with the narrative of persistence, change, invention, and adaptation I wanted to tell. Better yet, according to some Hopi authorities, they are destined to one day move to a Fifth World when this one becomes too corrupt. I imagined a future in which only shreds of pueblo culture remained; one in which some group of people who consider themselves to be the rightful inheritors of that culture take the opportunity to put it back together and begin again.

But just as in the first four worlds, things don’t go smoothly or according to plan.