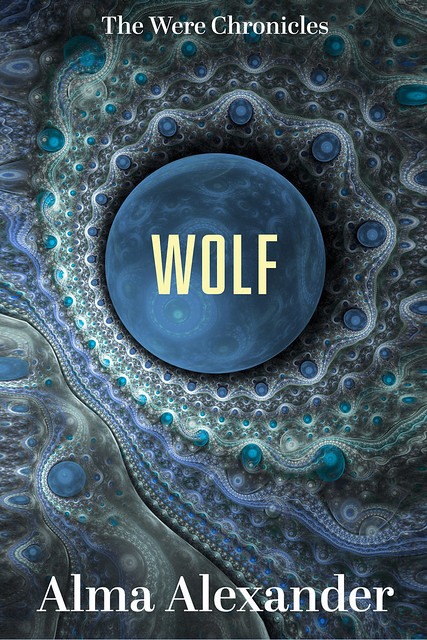 An idea can seem silly, wacky or frivilous — which can be great — but there’s always a chance it can bloom into something else… bigger. In Wolf, this was Alma Alexander’s experience. She’s here to tell you how.

When the original call came for an anthology featuring “unusual” stories about Were-kind, one that specifically specified that writers should try and be a smidge more original than wolves howling at the full moon, I had a brainwave which I think might be the closest thing to an actual Original Idea™ that I’ve encountered in a long time – the concept of a Random Were, a creature which doesn’t have a “fixed” form as such but can Turn into the last warm-blooded creature observed before the metamorphosis begins. ANY warm-blooded creature. The potential for merry mayhem was obvious and hilarious, and that was the way the story originally went – it was funny. (One of the characters – via an unfortunate farmyard accident – was thus transformed into a Were-chicken…)

The deeper I got into what was supposed to be a short story, the more I realized that I was trying to stuff a triple-layer chocolate cake into a cupcake baking mold. Not only did this thing not want to be a “short” anything, it wanted to be far bigger than I realized. It wanted to be a novel. And then it decided it wanted to be three novels. (Not a trilogy, mind you. A sort of triptych, where a central story arc was seen through three different points of view (with ramifications specific to the POV character). An ambitious and intense structure on which to hang what had very quickly outgrown the original amusing little concept.)  This story was bigger and darker than I could have imagined from its humble beginnings. And its gifts, in the end, were many – not least the three POV characters, one better than the other, some of the best people to grace any of my stories ever.

But the Random Were – big as that idea was –proved to be just the beginning. The bigger idea by far was the creation of the world in which all this happened. A world very much like ours but with the addition of an under-class of Were creatures who live amongst us constrained by  rules and laws imposed on them by a fearful majority which does not Turn. The Were live and work and go to school among us… but they are obliged by law to be locked away during their three days of Turn, and if they cannot oblige adequately by themselves then they are forced to report to places known as Turning Houses where they can be kept sequestered and away from the public eye (out of sight out of mind) for the duration. The Turning Houses are terrible places. And underneath even that evil lurks something deeper and greater still.

Most importantly… the Were aren’t just beleaguered by the mundanes of their world. They are slaves to their own biology and physiology… and there are those within the Were kindred itself who have agendas of their own and are pursuing them in secret and ruthless ways. And to get here, I had to do something that I had not done before now.

I had to go back to my educational roots.

I hold a MSc in Molecular Biology, but that has long been left behind, receding in the rear view mirror as I move forward in life. I worked in a research lab, briefly, but I bailed before I pursued a PhD and then went sideways into first scientific and then general editorial work, and then into writing my own books. My chosen genre had never really approached that original layer of science education… until now, until the novel called “Wolf”, until I was suddenly faced with the surprisingly enthralling opportunity to do something that I don’t think I’ve ever really seen done before: figure out the genetic basis of the Were (including the curve I had just thrown myself, the concept of the Random Were, which changed all sorts of fundamental ideas). On a molecular DNA level, I was going to work out exactly what kind of creature they were, and why, and how they were different to the rest of us.

And I loved it. And I loved the idea that I had wrapped empirical science (the basic building blocks of an entire species)  into social science (creating a society where all of this functioned, warts and all) into a layer of fantasy that makes it all so much larger than life and easy to sink into.

With this kind of depth, with a complex and tightly woven structure of a kind I have never attempted before, with the kind of characters who stepped up to carry the story… the Were Chronicles (“Random”, “Wolf”, and the forthcoming “Shifter”) may be the best thing I’ve ever written. And on so many levels, quite possibly the most important. The Big Idea here surprised even me; I often tell people that I am an instinctive writer who plants a story seed into fertile ground and then waits to see what kind of thing pops up, a daffodil or an oak tree. With these particular books, what grew was a redwood. And I am left – grateful, and not a little astonished – sitting in its shadow.