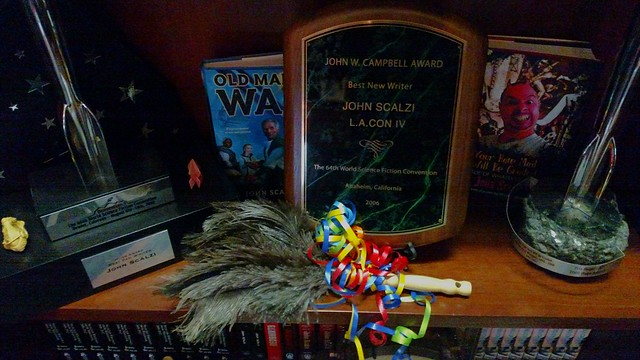 Behold my latest “award”: A feather duster, provided to me by Wendy Delmater at ConCarolinas, when we were on a panel about awards in science fiction. This is “The Award For Most Awards, 2015,” jokingly given but in fact gratefully received, as the awards do get dusty and dusting them is kind of a pain in the ass. This is one award that has a practical component, which is not a usual thing. It’ll likely stay on or near the shelf with the rest of the awards.

This “award” was just one of the delightful things about ConCarolinas that I got to experience this last weekend as Krissy and I attended. The convention treated us very well, both the folks running the convention and those attending. And both of my panels went swimmingly indeed. The first was a Q&A moderated by John Hartness, which ended up as a combination of John and I cracking each other up, and talking seriously about the business of writing, framed, unsurprisingly, by the deal I just made with Tor. I thought it was pretty much the right combination of fun and informative.

The second panel, I’m not gonna lie, I was worried about: It was “What Good Are Awards Anyway?” and was, quite obviously, about awards in science fiction and fantasy. Clearly, at one point or another it was going to touch on the Hugo situation this year, and that could have gotten annoying, fast. I’m happy to say that in fact the panel turned out to be a truly excellent and wide-ranging discussion, thanks to everyone on the panel (Hartness, moderator Missy Massey, Wendy Delatmer, Edmund Schubert and Gray Rinehart) all deciding that we didn’t want to just dwell on the Hugos, and did want to talk about the larger topic. We did of course discuss the Hugos, but by the time we got to them, in the last few minutes of the panel, enough discussion and context had been laid down that it was just part of the natural flow of the conversation. It ended up being one of the best panels I’ve been on recently, and that was down to my co-panelists, who to a person were professional and personable. I’d share a panel with them any time.

While at the convention, Krissy and I also managed to sneak away in the evenings with friends to experience Charlotte, which is a fine town if you are with the right company who knows where to go, which we were. So convention in the day, Charlotte at night, and all around, simply a wonderful time. We’ll be back. And in the meantime: Thanks, ConCarolinas. It was a blast.

Now I’m back at home, which is nice after a week of being on the road for events at BEA and at the convention, and after a week of watching the world react to the book deal. While I’ve hit most of the points about the deal that I wanted to make in previous entries here and here, I do have a couple of final(ish) observations to make about it, mostly relating to personal things.

The first is — brace yourself for a total lack of sympathy here — announcing a deal this size is actually really stressful. Not because people have been generally snarky or cranky about it; in fact nearly everyone has been lovely. But even good, positive attention can be taxing over a long enough period of time, and the deal happened just before I headed to BEA — the biggest bookseller event of the year — and then to a convention.

It was a whirlwind. People often don’t believe me when I tell them that I’m an introvert, but I am, and this last week because of travel and everything else, I didn’t get a whole lot of downtime to recoup from being around a ton of people. So even in the middle of what was objectively really one of the best weeks of my career, I was stressed out. Happy! Excited! Thrilled! And stressed. Again, I totally get it if people are less than sympathetic to my plight — I’m less than sympathetic, and it happened to me — but there it is. If in the last week you met me and I had a “deer in the headlights” kind of look about me, now you know why.

The second is that the week has reminded me that the vast majority of people really are happy when good things happen to you. I can’t tell you how wonderful folks have been to me in this last week, online and off. It’s also been great to be (relatively) open about the experience of the deal to people — to answer questions about how it happened, what the details are and how it will work moving forward. People generally seem to be less interested in the money porn aspect of it than they are about the mechanics of how this deal will play out over a decade and a baker’s dozen of books.

This pleases me. The deal has a fair amount of money attached to it, but speaking personally, the thing about the deal that is important to me is that the deal requires work. I’m not getting millions to be a showy celebrity loss leader book for my publisher (and if I were, boy, did they make a mistake). This deal is about a career — reflecting both the work it took to get to this particular point, and the work both I and my publisher are planning to do to keep it all going and (hopefully) build from here. The dollar figure draws attention, but it seems that by and large the workaday aspects of the deal are what people eventually come away with. I can’t complain about that. It is a workaday deal. A very nice one, to be sure. But I am going to have to bust my ass for the next decade to earn it. I’m glad people see it.

The third thing is that the commentary has revealed to me both how little so many people understand about how publishing works — which is understandable, because it’s specialized knowledge you don’t need to know unless you’re in publishing — and how some people certainly don’t let their own personal ignorance about how publishing works stop them from trying to convince other people that this deal is somehow not a good one — which is, objectively, kind of stupid and makes them look stupid for suggesting it. Of the second sort, rather than me detailing the stupidity of it, allow me to link to this blog post by Jim Hines, who has already done the requisite work.

I will say that at least some of this nonsense clearly stems from a personal animus various people have against me, either personally (i.e., maybe I was once mean to them online and now they hates the Scalzis forever, precious), or because they identify with some person or group which has hating me as a membership requirement. Their narrative has as a given that I am forever failing or on the verge of doing so, and that when it comes to the business of publishing that I am, at the very least, a naif, whereas they are stuffed with certain knowledge of How Things Work. 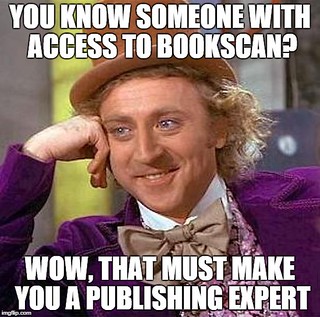 As I’ve noted before, there’s nothing to be done about these folks — haters gonna hate, etc — but I’ll admit that I do receive a certain snarkalicious joy out of watching these folks be so wildly wrong about pretty much every single thing they assert about me and my career. A favorite recent moment for me was reading some of these fellows expound, in great detail, how the Bookscan numbers for Lock In proved that particular book was in fact a great failure, that both I and my editor were in a panic about this, how Tor was planning to drop me and how my career was almost certainly doomed — at the same time as I was actively negotiating a seven-figure deal with the aforementioned editor and publisher that would keep me in house through 2026 at least, and would include sequels to Lock In. I couldn’t wait for the news of the deal to come out to see how stupidly wrong they would be about that, too. Suffice to say, they have not disappointed. It must be a blessing to be so ignorant about how ignorant you are.

But, again, these folks are a tiny minority. Most people have been wonderful. To you, the wonderful majority, I say: Thank you, thank you, and thank you again. And now that the news and commentary of the deal is beginning to settle down, what is left to do is the actual hard part: Write the books. I’m looking forward to that more than I can tell you.